The headline number for non farm payrolls has grossly overstated the weakness in December jobs growth. The reported (fictional, seasonally adjusted) gain of 74,000 jobs in December compared with economists’ consensus expectation of a gain of 197,000. The headline number was even lower than even the lowest estimate in the Bloomberg survey.

The miss of 123,000 grossly overstates the actual slowing in December. In whole number terms the actual, not seasonally adjusted (NSA) change in December was within 37,000 of the average monthly change for the past year. In the next month or two, the SA data will return to trend with a combination of larger increases in the latest month and likely upward revisions for December. For now, the market and the Fed will be misled by concentrating on the bad headline number. 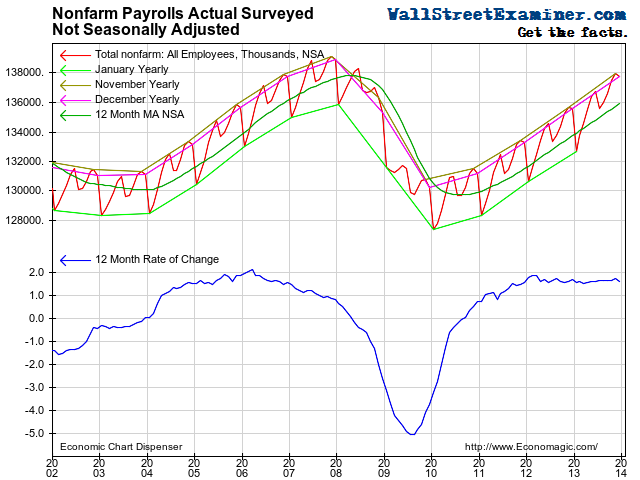 Actual, not seasonally adjusted data shows that the annual growth rate has averaged 1.645% over the prior 12 months, with very little deviation from the trend. December was only 0.15% slower than the growth rate in November, which was the best month since August 2012. The actual year to year gain of 1.618% was within 0.027% of the average year to year gain each month. As you can see from the chart, there really is nothing to see here. The downtick was well within the normal range, merely offsetting the uptick in the growth rate in November.

This trend has been remarkably stable for the past two years. While some see that as data manipulation, I’m not that troubled by the regularity. It is consistent with other data I track. Massive, spectrum wide data manipulation by multiple agencies to achieve cross data consistency seems unlikely, if not impossible.

It is really not that surprising to see a steady growth rate in such a large economy with a slow, plodding momentum of its own, regardless of how much tweaking the Fed and the government try. The US economy is a mammoth. It creates its own inertia. It does not change direction quickly. It only seems that way to most people because they’re not paying attention to the big picture trends.

Stocks rallied at first on this morning’s news release, then sold off. Bonds have rallied, and gold has rallied. Stocks first rallied on the expectation of a delay in further tapering by the Fed. Then second thoughts set in. Stock traders are confused as to whether the number means that a weaker economy could be bad news rather than good news.

Bonds have rallied because they were at major support, sentiment was lopsidedly bearish, except for commercials who held record long positions in the futures, and the shorts were forced to cover on the weaker than expected data. There too the expectation of a delay in further tapering probably played a role. Gold rallied for similar reasons.

The problem is that all of the moves were based on false seasonally adjusted data. The jobs trend did not weaken. It’s well within the parameters of the trend of the past two years and is near the central tendency of that trend.

The household survey even showed a gain of 143,000 persons employed in December, which is unusual for December. I don’t mean to imply in any way that the jobs story is a good one in the big picture. I believe that the non farm payrolls data gives an inaccurate picture of the overall health of employment in the US due to the way it is counted. In spite of the December gain, the household survey shows a much slower growth rate than the employer survey of non farm payrolls. This suggests that the payrolls number is double counting multiple jobholders. I’ll cover the household in a follow up report.

Infographic of the Day: Anatomy of a Lightsaber

Infographic of the Day: Anatomy of a Lightsaber