Slapping Trillions of Obligations Into the Diapers of the Next Generation

I get a huge volume of e-mail, but I don’t get the kind of hostile stuff that guys like Joe Weisenthal and Paul Krugman sometimes joke about. I got one today, though, and boy is this guy steaming over my MMT coloring book! 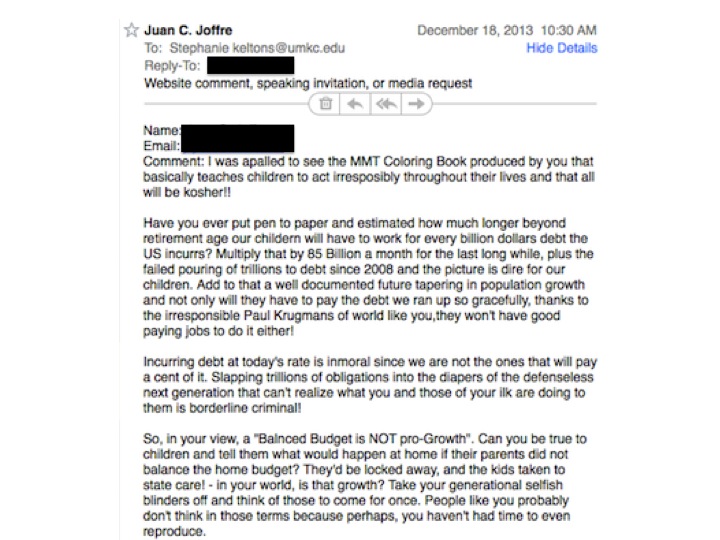 It’s hard not to sympathize with a guy like this. He apparently has kids, and he’s scared to death that his children and grandchildren will suffer real harm because Washington won’t get its fiscal house in order. And why wouldn‘t he think that? I mean, really. Politicians on both sides of the aisle have spent decades labeling the government’s finances a “fiscal train wreck” that will leave future generations with a “crushing burden of debt.” The mainstream media hypes these fears on a daily basis, and even NPR appears to be shilling for the debt scolds.

So it’s no wonder a guy like this is blasting me. He had probably never before encountered anything that rejects, so forcefully, the entire compilation of debt and deficit tropes.

He doesn’t strike me as a particularly open-minded guy, but I think I’ll send him this list of suggested readings anyhow. Maybe he hasn’t finished his holiday shopping.

Why This Stock is a Long-Term Portfolio Must-Have

Why This Stock is a Long-Term Portfolio Must-Have