This post is part 2 of The Essence of Hilsenrath

I came across a material error of fact in the Jon Jerry Mahoney Hilsenrath piece that has caused such a stir in the financial wackosphere this weekend. Being the good citizen that I am, I felt that it was my obligation and responsibility to notify Mr. Hilsenrath of the error. I knew that he would want to correct the record.

The error regarded two statements that he juxtaposed that implied that employment had improved as a result of QE, which is not true.

Mr. Hilsenrath reported that Philly Fedhead Chucky Cheesesteak Plosser said “It is pretty hard to say we haven’t seen an improvement in the labor market.” However, Jerry did not say whether Mr. Plosser’s statement was connected to the error of fact. He makes no reference as to who supplied the information.

Mr. Plosser would be correct in saying that the labor market has improved. That’s been the case since 2009. However, he could not say, and in fact may not have said, that it has improved as a result of QE. That could not be supported. My guess is that he did not say it, but that Jerry juxtaposed the two statements possibly unintentionally, giving the impression that QE had somehow worked to boost employment. If so, that would be wrong. So I sent him this short, polite email pointing out the mistake.

Re: “Payroll employment has increased on average by 193,000 per month during the eight months since the program was launched, compared with average gains of 157,000 before it began.”This statement is untrue, as is Mr. Plosser’s point. [Ed. Note: Upon re-reading the article I realized that Mr. Plosser’s overall point was correct in the general sense. It is not correct in relation to QE3-4.]

In fact, in the 8 months since the program was announced the total actual count of jobs has gone up by 1.120 million. In the like period the year before–September 2011 through April 2012–total nonfarm payrolls increased by 1.196 million. So actually the economy has done worse under QE 3-4 than during the prior pause. This is based on the actual not seasonally adjusted counts, which are not subject to revision after the month after the release. It is a like to like comparison. 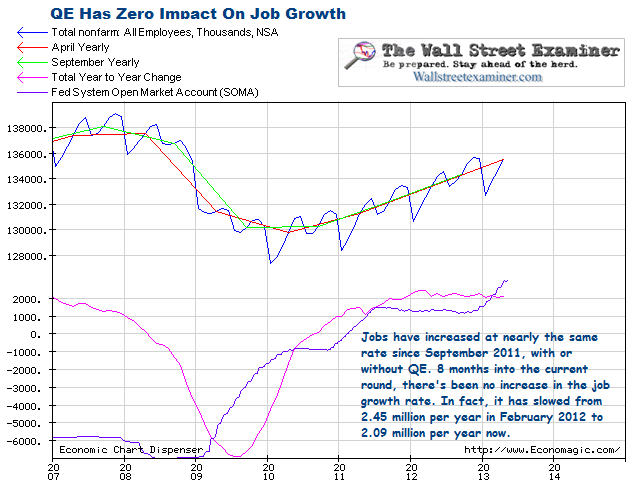 QE Has Had No Impact On Jobs – Click to enlarge

To suggest that QE is working [to increase jobs] is wrong. It has had no impact on jobs.

I’ll let you know when I hear back from him.

Read The Essence of Hilsenrath

Sunday Evening News for the Eurozone: May12

Ritholtz: This is Your Brain on Stocks

Ritholtz: This is Your Brain on Stocks