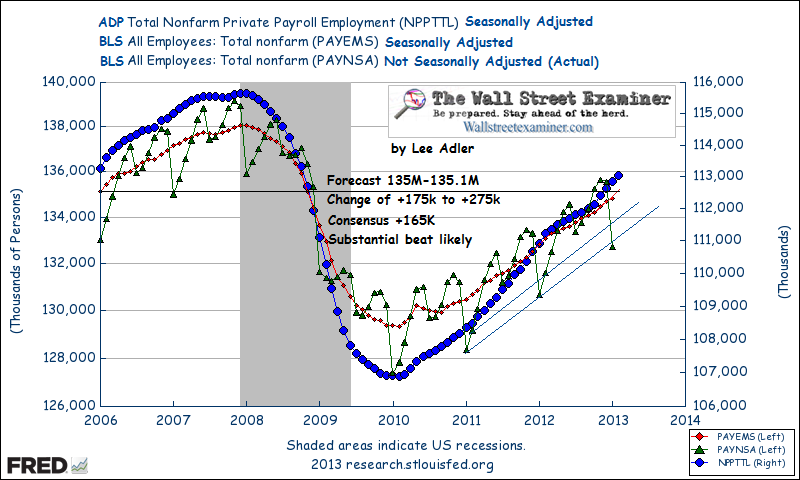 With the caveat that the ADP data is highly idealized, smoothed, curve fitted, abstract impressionism, so is the BLS headline number. The BLS makes no secret of the weakness (see paragraph. 4) in this method, beginning with the fact that the statistical margin of error is +/- 100,000 and that the seasonally adjusted number will be revised not only next month but every year for the next 5 years as they hone in on what the number actually should have been. Meanwhile, all the Wall Street pros watch and try to guess the headline number within 10,000 or so. In reality, any guess that comes within 100,000 of the first headline print is a good guess, but the market often behaves as if it’s a huge miss or beat. A huge beat looks more likely than a miss this month, based on a graphical forecast that I just did with my Etch-A-Sketch program, projecting the BLS forward based on the information from the ADP survey.

The idea that payrolls will beat the consensus is supported by the correlation with first time unemployment claims which continue to beat forecasts, and massive strength in real time withholding tax collections for February (which I cover weekly in the Professional Edition), where the gains were well in excess of what might be expected from the increase in tax rates.

I do not have any idea what the headline number will be on Friday when the data is released. This is just an illustration of what might happen based on the projection in the above chart. My guess is no better than yours, but probably better than the consensus of economists, who use GIGO econometric models. They really can’t be faulted for guessing a fictitious number wrong. The entire exercise itself is really a joke on all of us. As long as the Fed keeps printing money and pumping it into Primary Dealer trading accounts first, the market will continue rising regardless of whether the headline payrolls number misses or beats the consensus estimate.