by James Quinn, The Burning Platform

This article is material contained in “All Is Well” at The Burning Platform.

The Federal government is blowing a new huge bubble in the higher education realm. Since the Federal government took over 85% of the student loan market in 2009, the debt outstanding has surged to over $1 trillion from below $600 billion. The Feds don’t care about credit risk or loan losses. You’re on the hook for the losses.

The purpose for doubling the amount of student loans was to artificially lower the unemployment rate by removing as many people from the labor force as possible. The 600,000 University of Phoenix enrollees getting their on-line master’s degrees in basket weaving while sitting in their mother’s basement, subsidized with $20,000 loans from the taxpayer, didn’t count as unemployed.

Enrollment in these diploma mills has begun to plunge, as the scam has been revealed. The New York Times reported that:

“Enrollments at the University of Phoenix and in the for-profit sector over all have been declining in the last two years, partly because of growing competition from other online providers, including nonprofit and public universities, and a steady drumroll of negative publicity about the sector’s recruiting abuses, low graduation rates and high default rates … including many charges that the schools enrolled students who had almost no chance of succeeding, to get their federal student aid.”

Enrolling students who have no chance of graduating is exactly what the Obama Administration and the status quo want.

Based upon the chart below you would think the United States is producing the brightest bunch of young people in U.S. history.  Nothing could be further from the truth.  Only 43% of the 1.66 million private and public school students who took the college-entrance exam posted scores showing they are prepared to do well in college, according to data released by the College Board, the nonprofit group that administers the SAT.

The SAT data mirror scores from the ACT college-entrance exam which showed about 75% of students failed to meet college-readiness standards. If SAT scores are at decade lows, how could college enrollment be at record highs?

Our government controlled public school system is graduating functionally illiterate dullards and the government is then subsidizing these subprime students as they matriculate into substandard colleges across the land. Approximately 3.4 million seniors are graduating from our high schools every year.  The 1.66 million seniors who took the SAT exam are the cream of the crop.  If the 50% of students who took the SAT exam could score so pitifully, imagine how dimwitted the 50% of students who didn’t even take the exam must be. The upshot of these tests are that only 700,000 of all the graduating high school seniors (21%) are capable of getting a B minus or above in college. 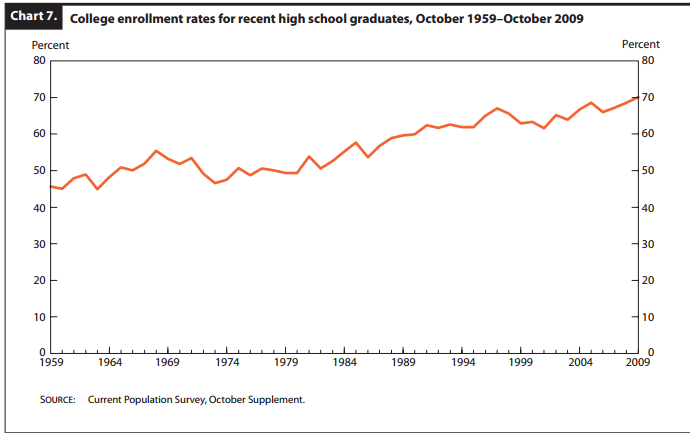 There are approximately 13 million 18 to 24 year olds enrolled in college today and at least 6 million of them have little to no chance of graduating.  If the Federal government was not subsidizing them with loans, they would rightfully be looking for jobs geared to their intellectual capabilities.  Would tuition rates be soaring if there were 6 million less drones matriculating into one of the 4,000 mostly mediocre higher learning institutions in this country?

The Federal government bureaucrats who think they can control the levers of finance to steer our economy to greater heights are creating a new subprime bubble. The absolute implosion of the for profit diploma mills, that have fed like bloated pigs at the Federal loan trough, is the Bear Stearns moment for the massive student loan losses that will be foisted on the shoulders of the American taxpayer. The deceptive schemes, fraud, and financial aid manipulation practices of the publicly traded diploma mills – Corinthian Colleges (down 90%), ITT (down 90%), Apollo Group (down 80%) and DeVry (down 60%) have been revealed, as their ill- gotten profits have evaporated and their stock prices have crashed. Enrollment at the king of worthless online degrees, the University of Phoenix, has plunged from 600,000 to 400,000 and they are closing 115 of their 227 campuses. But still the Federal government continues to blow the bubble bigger and bigger as non-revolving consumer debt has reached all-time highs. Peter Thiel recently compared this bubble to the housing bubble we are still dealing with:

“We have a bubble in education, like we had a bubble in housing…everybody believed you had to have a house, they’d pay whatever it took. Today, everybody believes that we need to go to college, and people will pay– whatever it takes. There are all sorts of vocational careers that pay extremely well today, so the average plumber makes as much as the average doctor. I did not realize how screwed up the education system is. We now have $1 trillion in student debt in the U.S. Cynically you can say it’s paid for $1 trillion of lies about how good education is.”

Delinquency rates have already begun to skyrocket as the diploma mill scam implodes, dropouts can’t make loan payments with their EBT cards and even graduates from legitimate colleges are stuck waitressing at TGI Fridays and can’t make their payments. Millions of millenials are ensnared in the chains of debt servitude, with no chance of escape.

Delinquency rates on student loans made in the past two years stand at 15%, according to FICO, versus 12.4% for loans made from 2005 to 2007.  This is proof that loans doled out since the Federal government took control of the market have been distributed willy-nilly in a frantic effort to artificially reduce the unemployment rate.

Average student- loan debt last year rose to $27,253 from $17,233 in 2005, with almost 605 of bank managers surveyed in December expecting delinquencies to worsen in six months, according to FICO. Andrew Jennings, chief analytics officer of Fair Issac, said in a statement:

“This situation is simply unsustainable and we’re already suffering the consequences. When wage growth is slow and jobs are not as plentiful as they once were, it is impossible for individuals to continue taking out ever-larger student loans without greatly increasing the risk of default.”

When subprime mortgages blew up, at least there was collateral to alleviate some of the losses. When the subprime auto loans blow up, at least there will be vehicles to repossess. Student loan debts are the ultimate in subprime, with no collateral and millions of jobless debtors. The situation is much worse than the delinquency numbers reveal. More than half of the student loans are in deferment, grace periods, or forbearance, meaning they are not currently requiring repayment. This means the true delinquency rates are twice as high as the reported figure of 15%. What happens next can be succinctly summed up by the esteemed economist John Kenneth Galbraith:

“Then the shit hit the fan.” – John Kenneth Galbraith

The involuntary taxpayer bailout for this Federal Government created disaster will exceed $200 billion after the shit is done hitting the fan.