French goverment unpopular, but does not lack determination

Mortgage credit in France crashed by 25 % in September on a 12 month sliding scale basis, with mortgages on new housing down by 19 % and on old housing by 31 %, according to l’ObservatoireCrédit Logement/CSA.
Nothing like this has been seen since 1945, according to Michel Mouillart at Atlantico. The development suggests that both housing construction and housing prices will fall.
Housing prices in France have until now maintained a very high ratio in relation to rent values, indicating that there is plenty of room for downward adjustment in housing prices. Housing construction is already in decline, and looks as if it will fall a lot further before the next recovery begins (see charts below).
Ironically, changes in the terms on which mortgages can be obtained have kicked in at just the wrong time. The new terms are reinforcing the downturn.
It became more difficult in 2012 to obtain zero interest loans (introduced to boost recovery after the 2009 recession) and will become even more difficult in 2013, while an important tax deduction, the Sellier deduction, for investment in new rental housing, has been terminated by the current government. It is being replaced with a similar deduction, but it applies to investment in social housing. It remains to be seen whether this will prove to be equally popular.
Michel Mouillaert estimates that the production of new mortgage credit will fall by 28 % this year to €115bn with a further fall to 105bn likely in 2013.
It looks like a return to a recession of the severity of the one that took place from 2008 to 2009, when about 100,000 jobs in building disappeared.
Employment in the construction industry was about 1.83m in 2011. It has fluctuated over the past 25 years between about 1.85 and 1.45m, which provides a rough gauge for the potential decline in case of a severe and lasting recession, as in the period 1993 – 98.
Housing starts went from about 350,000 in 2003 to a peak of 450,000 in 2007 and are currently around 400,000 annualised. There was a trough in 2010 at about 325,000.
Artisanal building industry activity trend (INSEE): 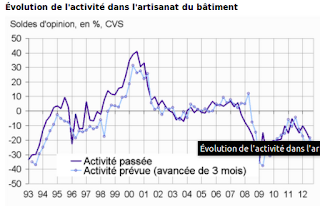 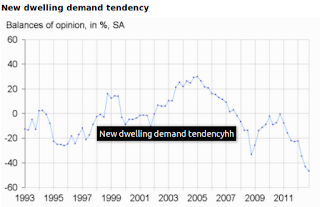 The government estimates that there is a housing shortage of about one million homes and wants to see housing starts rising to 500,000. Some hope!

Hilary Barnes is a veteran economics and business writer. He was for 25 years the Copenhagen Correspondent of the Financial Times, Nordic Correspondent of The Economist for part of that time, and published a paper newsletter, sold to international companies in the Nordic countries, called The Scandinavian Economies for over 30 years.