Should the U.S. Have a Strategic Gasoline Reserve?

With crude oil accounting for 65% of the price of gasoline, there’s typically a high correlation between the price of oil and gasoline. However, there’s been a disconnect between the two for the most part of this year. The main reason for the disconnect is the divergence of supply market fundamentals. 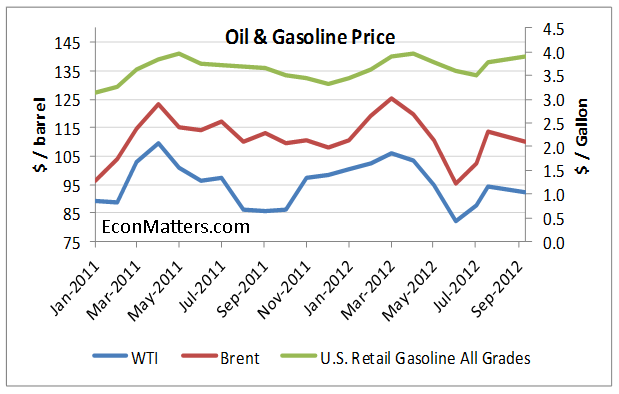 As the two charts below illustrate, while domestic crude oil supply remains way above the 5-year average, the gasoline supply is actually a lot tighter by historical norm, primarily due to some domestic unscheduled refinery accidents/outages, refinery closures in the Atlantic Basin leading to an increase in gasoline exports from the US.

To make things worse, on top of the already tight domestic gasoline supply, Fed picked a nice “political” timing to launch its infinite QE3. On September 13, 2012, Helicopter Ben has pledged an open-ended $40 billion a month MBS bond purchasing program, while holding the fed funds rate near zero at least through mid-2015.
The likely eventual consequence of this unlimited money printing operation – Dollar debase and the artificial price inflation of almost everything from commodities (including Oil and Gasoline) to stocks, and consumers end up paying the price.
For now, Brent dropped 4.5% last week, while U.S. WTI crude also lost 6.2%. Oil has been held down primarily by slowing global economic growth and the dismal demand outlook. Meanwhile, the national average gasoline price also saw a nickel a gallon decrease from a week ago, according to the AAA automobile club. Nevertheless, the current national average –$3.805 a gallon for regular gasoline — is still 8% above a year ago level and fairly close to where they were in 2008 before the financial crisis.
Gasoline has always been a hot topic during any election year. In fact, interesting exchanges have already taken place between White House, G7, and the IEA regarding a potential SPR (strategic petroleum reserves) release, with a clear divide between the oil industry experts (IEA) and politicians (White House, G7, et al). IEA’s position was that oil markets were currently well supplied and there was no reason to release SPR.
As predicted in our previous post, domestic crude oil inventory could continue to build even from the current high level. From a global supply standpoint, Saudi Arabia reportedly has pledged to pump around 10 million barrels of crude a day in a bid to cut the price of Brent crude to around $100/bbl. These factors should further weaken the justification of an IEA-coordinated oil release like the one from last year.
With Obama’s re-election on the line, and to counter the potential effect of artificial price inflation by QE3, an SPR release attempting to bring down oil and gasoline prices would be the politically correct move by the White House.
However, even if there’s an SPR release–unilateral by the U.S. or not–it will unlikely have as significant impact as people might expect on gasoline prices due to the diverging supply fundamentals discussed here. Think it could be a good idea to consider a strategic gasoline reserve as well?
Related Articles
Analysis, Opinion and Investing articles by EconMatters
Previous Post