Poverty, Joblessness, and the Job Guarantee

by Guest Author Pavlina R. Tcherneva, Assistant Professor of Economics at Franklin and Marshall College, Research Scholar at The Levy Economics Institute, and Senior Research Associate at the Center for Full Employment and Price Stability.  This is cross-posted from New Economic Perspectives

A recent report on the State of America’s Children revealed distressing statistics. More than 1 in 5 children live in poverty in the U.S., by far the most impoverished age group in the nation. Between 2008 and 2009 child poverty jumped 10%, the single largest annual jump in the data’s history. While the U.S. is the wealthiest nation in the world in terms of GDP (and # of billionaires), it ranks last in relative child poverty among all industrialized nations. 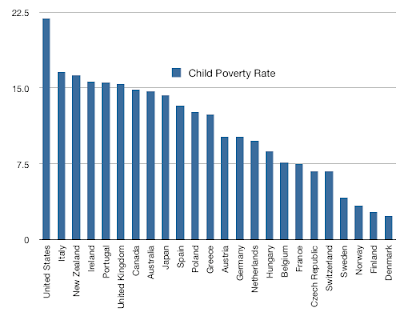 Overall we have 46.3 million people in poverty in the U.S. (the largest number in the postwar era), which is 14.3% of the total population—a percentage that has been trending up since 2000.
Two of the primary causes of poverty are the skewed income distribution in the U.S. and the high levels of unemployment.
While the income of the top 0.01% of households rose by 68% during 2002-2008, the incomes of the bottom 90% fell by 4% (note that the richest 10% of households in the U.S. take nearly 50% of the entire income in the economy). Indeed over the last few years we have witnessed one of the largest redistributions of income and wealth to the top in history.

The unemployment rate is another major contributing factor to the grim poverty picture. While unemployment insurance kept over 3 million people out of poverty, full time jobs at decent wages are the only way to tackle the poverty problem in the US in any meaningful way. In the absence of such policies, families have had to rely on government support, which has been falling, and will likely continue to fall in the face of austerity over the next years. For example in 2010, two years after the start of the Great Recession, the Temporary Assistance to Needy Families (TANF) helped 56% fewer children than in 1996 (note also that Congress refuses to extend the unemployment insurance benefits).

Working families are not doing terribly well either: 16.4% of full-time, full-year workers do not earn enough to escape poverty. Working families thus have had to rely on government programs such as the Earned Income Tax Credit (EITC), which benefited 24.5 million families in 2008, most of which was disbursed to families with low-wage workers.

The government programs the poor rely on are either too small or disappearing. The alarming state of America’s children is a stark reminder that public enemy #1 are joblessness, poverty, and income inequality, not the government debt or deficit.

The irrational debt and deficit phobia fabricated by Washington has diverted attention from the most pressing economic problems of the day. MMT economists have made the argument for decades but now even mainstream pundits from Warren Buffet to Alan Greenspan are arguing that there are no good economic reasons why a nation, which issues and controls its own currency, should ever default on its obligations—from interest on government debt, to veteran salaries, to social security payments. All U.S. government spending is denominated in dollars, not a foreign currency, and thus federal government deficit spending is always sustainable, but deficit spending is not always responsible or effective. So given the dreadful economic picture, it is time to rethink and reorient government spending policy.
To start with, I propose a three-prong approach:
1. Institute a Universal Child Allowance

Universal child allowance programs are widely recognized as policies that alleviate child poverty. Almost all industrial nations (but not the U.S.) have some form of universal child allowance—a federally funded program that provides a monthly stipend per child to families with children under a certain age. In the U.S. we have child tax credits (like the EITC) which only go to working families. The children of the unemployed cannot benefit from this assistance. The U.S. tax system is also notoriously difficult to navigate and not all families get the credits or child assistance for which they may be eligible.

2. Strengthen Social Security
The only age group which is not experiencing an increase in poverty is 65 years or older. The sole contributor to the precipitous decline in elderly poverty (from rates above 35% in the late 50s when we began collecting the data) is Social Security and the subsequent benefit increases that took place through the mid-70s. Since then, elderly poverty has stabilized around 9% and while there is still more to do to reduce it further, any impending reforms and reductions in Social Security benefits will undoubtedly reverse these important gains. Note also that many children rely on this program. In 2009, 3 million children received Social Security benefits from disabled, retired or deceased workers.
3. Implement a Job Guarantee
It is time for policy makers to take the Job Guarantee (JG) proposal seriously. Direct employment by government at living wages is the most immediate method for reducing the unemployment rate and keeping the jobless and their children out of poverty. Direct job creation has important macroeconomic stabilization features and is the original Keynesian vision of how fiscal policy should be conducted. Generalized pump priming is slow to work, especially in a balance sheet recession. Instead, government spending needs to be directly targeted to the unemployed themselves and to distressed area and communities. There are far too many public needs that go unfulfilled, there is too much public sector squalor, and too much unmet demand for public goods provisioning. It is time to put the jobless to work for the public purpose.
The JG is the most effective way to jumpstart the economy. It offers an immediate reduction in the unemployment rate and a source of stable demand that will grease the economic wheels. The JG will complete important and much needed public sector jobs and will prove to be an effective transitional program for the unemployed, meaning that as the private sector begins to hire, many JG workers will find private employment upon completion of their public sector projects. Training, education and job placement assistance (all part of the JG program) can help with this transition. It is essential that we implement the job guarantee for another reason. There is plenty of evidence today that firms which are looking for workers explicitly refuse to hire the unemployed. Big or even small gaps in one’s employment history are not looked on kindly by the firm sector.

The JG is a smart and effective fiscal policy, which should be a policy of first resort when recessions hit. And since we have allowed unemployment to develop to such high levels, we would need a much bolder JG program than if it were implemented 2 years ago. Still the JG may be our only policy option left. As Winston Churchill ones said, “Americans can always be counted on to do the right thing…after they have exhausted all other possibilities.” It’s time for the Job Guarantee.

An Update on $VIX

An Update on $VIX