Why Has the Beveridge Curve Shifted?

I came across an interesting research by Glassdoor. According to this new research paper, the time required for hiring processes has grown dramatically in recent years, both in the U.S. and internationally. That means it is taking longer for job seekers to get through the interview process and actually land a job.

The chart below shows the average time for hiring processes by country in 2014, which ranged from 22.1 days in Canada to 31.9 days in France. 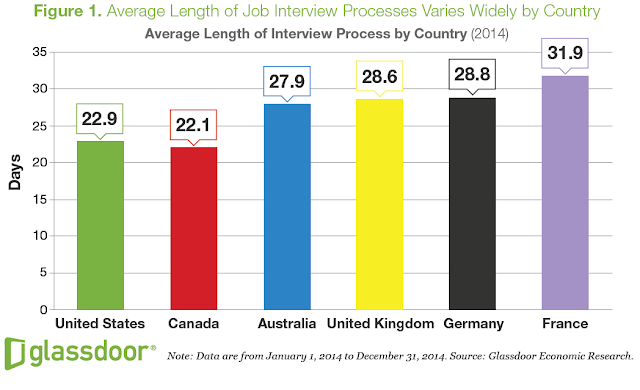 The research found one major contributing factor to the longer wait time to get hired has to do with job interview “screening” methods used by employers. Each additional “screen”-such as group panel interviews, background check, skills tests-adds significantly to hiring times.

Of course bureaucracy is certainly a factor contributing to the current lengthy hiring process. The chart from Bloomberg (based on the same Glassdoor research data set) shows the number of days in the interview process by major U.S. cities. So not surprisingly Washington DC bureaucrats lead the U.S. city group with the longest waiting days of 34.4 days. 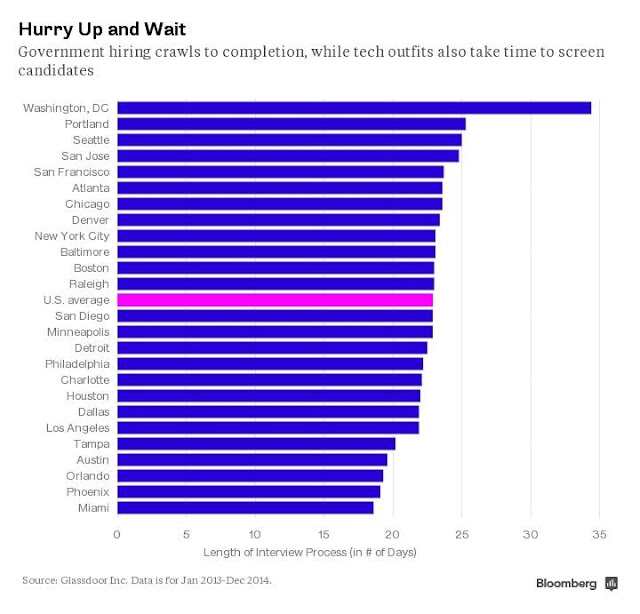 Delays in the hiring process could also mean longer period of unemployment in the economy. This trend could be partly responsible for “a notable shift in the Beveridge Curve” observed by the Federal Reserve Bank of New York. 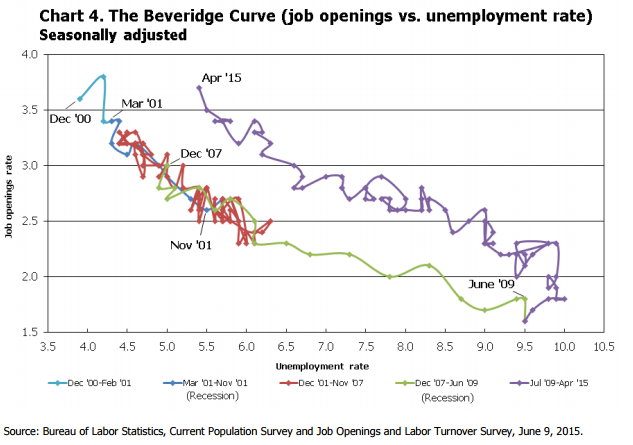 I personally believe the longer hiring process is also a reflection of the current trend of ‘youthification’ in the corporate world. Worried about the vacuum left by the much hyped mass baby boomer generational retirement, many corporations have accelerated (shortened) the typical leadership role promotion process experienced by the boomer generation, as well as the boomer’s retirement process and timeline in the name of “Workforce Management” or other similar terms. As a result, many current “hiring managers” are Gen X or Millennials (i.e. Gen Y), and many of them were put in leadership roles pre-maturely.

Reliance on Group and Tools in Decision-making Process

The Post-boomer Generation grew up with the luxury of many new technologies and tools unavailable to the Boomer Generation, they tend to rely more on tools (e.g., screening) in the decision-making process. They also tend to be ruthless (‘relationship’ means very little), and like to band together making ‘team decision’ and act as a ‘Group’ favoring technique such as ‘group panel interview’ in the hiring process. (On a side note: this tendency of banding together also gives the younger generation more advantage, typically over older boomers, in corporate power struggle).

In contrast, since technology was not as advanced and widely available during the Boomer generation, Boomers tend to be more independent thinkers with sharper instinct and less hesitant in making a judgement call decision (Note: this does not necessarily mean poor decision-making without reviewing supporting facts).

So that means the decision-making process(e.g. filling a vacant position) now takes longer within the new generation of ‘hiring managers’, and partly why it is getting more difficult to match non-routine high skill job vacancies (Try finding a tool that can reliably screen a job applicant’s intangibles like ‘judgement call’ capability).

Gen X and Y have been hyped as having superior computer skills (mostly entertainment-related such as mp3, games, but not the more advanced work-related like data-warehouse, ERP systems) than Boomers and many corporate management training classes in the past decade have preached boomer managers to make consideration for the ‘generational gap’ (well, President Obama is a Baby Boomer). The other side of the coin is this has bred a new middle management with the tendency to ‘group think’ and over-standardize everything killing creativity and ‘big-picture view’ within Corporate

What You Missed Friday

What You Missed Friday