An improving economy and falling unemployment should significantly improve the job prospects for the nation’s teens this summer; at least, for the declining number of teens who actually want jobs.

In its annual teen summer job outlook, employment among 16- to 19-year-olds is currently at its highest non-summer level since 2009 and is expected to increase as school lets out and seasonal job opportunities expand.

Last year, teen employment increased by 1,297,000 jobs during the summer months of May, June and July, according to non-seasonally adjusted data from the United States Bureau of Labor Statistics. That was down 4.3 percent from the previous year, when 1,355,000 teenagers found jobs from May through July.

As of March, just two months prior to the teen employment surge that begins as school ends, there were 4,491,000 employed 16- to 19-year-olds. That is the highest March employment level for this age group since 2009. Meanwhile, the unemployment rate among teens was 17 percent in March, down significantly from a recession high of 29 percent, recorded in June 2010. Said John A. Challenger, chief executive officer of Challenger, Gray & Christmas”

Teenagers wanting jobs this summer will, by no means, have it easy. There is still a lot of competition from their peers, as well as older job seekers willing to take lower-paying jobs. However, the improving economy means that some of those who had settled for jobs normally reserved for teens are moving up to higher skilled, higher paying positions, thus leaving the door open for more teens.

A recent survey of 1,000 employers by hourly wage job search site Snagajob.com offers further support of a stronger summer job market this year, with nearly 80 percent of employers expecting summer hiring to increase or stay about the same as last year.

It is key for young people who want to work this summer to not wait until the final school bell to begin the job search. If you have not started talking to employers yet, now is the time to do so.

The other key component to the summer job search is, as already mentioned, actually talking to employers. Employer websites and online job search sites, such as SnagAJob, make it easy to conduct a job search from one’s computer, but face-to-face interaction remains the best way to achieve job-search success. That is the case whether you are a teen seeking an hourly-wage summer job or a CEO seeking a multi-million-dollar compensation package.

While the job market is expected to be stronger for teen job seekers this summer, it appears that a growing number of teens simply do not want jobs. The participation rate among 16- to -19-year-olds has been declining since the late 1970s. 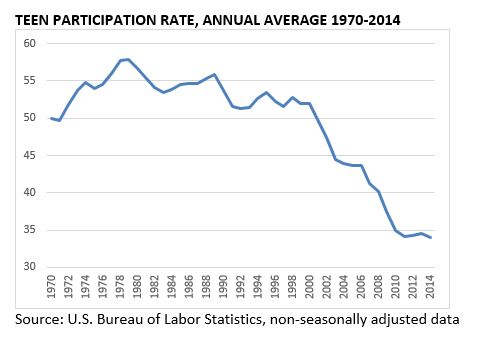 Some the decline can be attributed to periods of recession. However, the data show that participation declined even as the economy was booming in the late 1990s. Furthermore, figures from the Bureau of Labor Statistics shows that, over time, the number of teens not in the labor force has steadily increased, but the number indicating they want a job has remained flat. 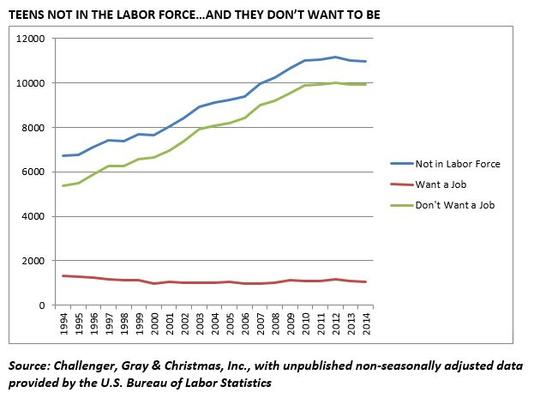 It is not that young people have gotten progressively lazier. In fact, it is quite the opposite. They are spending more time on homework, extracurricular activities, and summer educational and personal development programs. All of these factors take away from time that used to be spent in a traditional job.

Unfortunately, young people may be doing themselves a disservice by shunning traditional summer jobs. Study after study show that earning power and success throughout one’s career is improved significantly by working as a teenager. While it is important to prepare for college and life beyond college, working a summer job should be considered part of that preparation.