RETAILERS ADD MORE THAN 180,000; MOST OCTOBER JOB GAINS EVER RECORDED

In preparation for what is hoped to be the strongest holiday shopping season since the recession ended, retailers went on a hiring spree last month, adding more workers than they ever have in October.

Last week’s employment report from the Bureau of Labor Statistics revealed that retail employment grew by non-seasonally adjusted 180,600 in October. That is the largest net increase on record for the month since the agency began tracking industry employment in 1939, according to an analysis of the data by global outplacement firm Challenger, Gray & Christmas, Inc. 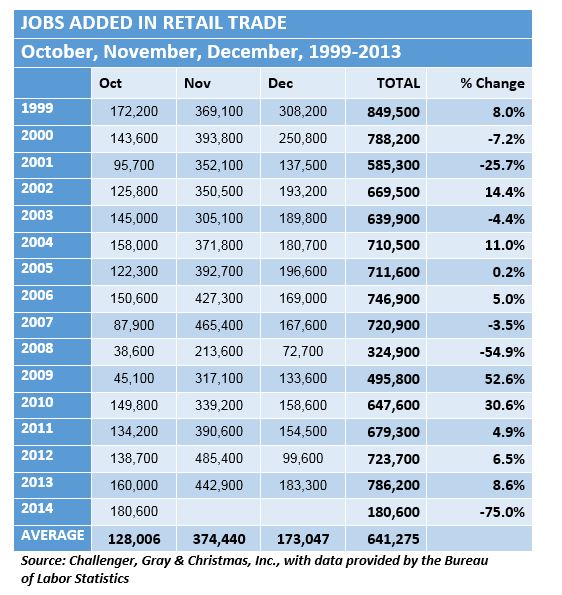 Last month’s record-breaking employment gains were up 13 percent over the 160,000 workers added to retail payrolls in October 2013. 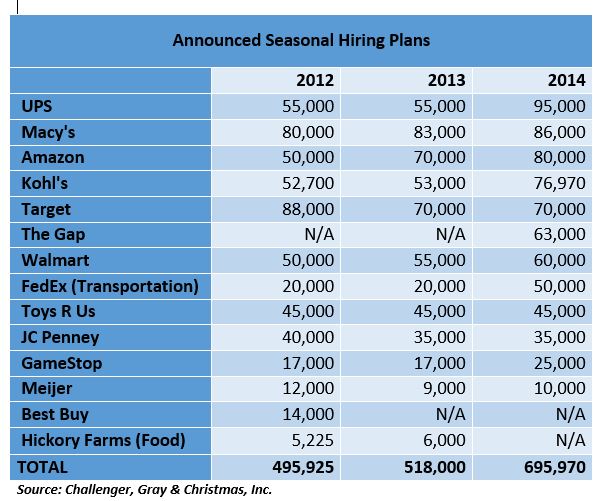 Strong October hiring does not guarantee that holiday hiring will surpass last year’s level, but it is certainly a good sign. We have seen steady increases in the number of seasonal workers hired since 2008, when recession-ravaged retailers added a paltry 324,900 seasonal workers in the final quarter of the year. Holiday hiring returned to pre-recession levels in 2012 and, in 2013, saw the strongest job gains since 2000.

While the bulk of the seasonal hiring has already been completed, it is never too late to find openings. Many of the areas adding seasonal workers, including retail, food service and shipping companies, tend to have high turnover. Because these employers are adding so many workers so quickly, the odds of failed hires increases significantly. They just don’t have the time to make sure the applicant is the best fit for the job. As a result, job seekers may be able to continue to find opportunities well into the holiday season.