September 8 Weather and Climate Report – What if it is a Modoki? Alternative Version

What if anything are they telling us today.

Australia will issue an update tomorrow.

But what kind of an El Nino will it be? Not all El Ninos are alike and in recent years the distintion between traditional or canonical (true to form) El Ninos and Central Pacific El Nino’s often called El Nino Modoki has become increasingly clear. In Japan they are forecasting an El Nino this winter followed by an El Nino Modoki the subsequent winter. This becomes important because the impacts of each type of El Nino on weather worldwide is very different.

This is illustrated in the following maps:

Here are some blown up versions of those maps but the quality is low since the originals are small so when you blow them up you lose resolution.

And again here are some blown up verisons

And looking just at the U.S.

Below is a breakdown by area of the World

You can find these graphics and more information here.

So there is a big difference yet BOTH WILL REGISTER AS AN EL NINO ON THE ONI INDEX.

Some think a Modoki is some sort of strange thing. To me it looks like a Modoki is simply an El Nino that did not fully make it to Equador or after reaching Equdor has taken its sweet time getting all the way back to the Western Pacific Warm Pool. From a weather perspective with a Modoki you end up with two Walker Cells. So you have a lot of precipitation in the Central Pacific.

Most believe the El Ninos of 2002/2003 and 2004/2005  were actually of the Modoki variety and you can see that in the data for New Mexico and Rio Grande Stream Flow. The below may be a Bob Tisdale compilation but it is based on the Ashoc formula. The 2009/2010 El Nino was also a Modoki,  So you see what you read in the news may not be very useful. I do not believe that many TV and Radio station weather people understand the difference between these two types of El Nino’s. It is fairly recent knowledge.

To make things even more complicated some believe there are two kinds of El Nino Modoki’s and this is described here.

I am not going to go into the details this evening but based on these authors we have had since 1950 we have had sixteen El Ninos broken down as follows:

Although both the researchers work for NOAA and were based in Miami Florida when they did this research they seem to have used the Chinese System of indentifying an El Nino i.e. forcusing on Nino 3.0 rather than Nino 3.4. Nino 3.0 is the eastern part of Nino 3.4. This may explain the slight difference between their characterizations and that of Bob Tisdale and NOAA in that these Chinese authors do not seem to recognize 2006/2007 as any kind of El Nino. I have to look into that further.

But the general conclusion is that since the PDO turned negative in 1998 we may not have had a traditional or what is called technically a canonical El Nino. I do not have the time right now to match the above categorization of Modoki I and II to precipitation patterns in the U.S. The referenced authors focused on the Western Pacific mainly China.

It tells me that we have to be very careful about how we relate to something called an El Nino since there are at least three varieties and each has a different impact on Global Weather.

A very good reference to the literature on ENSO can be found here.  It is an amazing document and the discussion on Global Waming is very interesting. There is no consensus on how Global Warming has or will impact ENSO although many think it does, But they disagree on how.

I presented this chart last week. 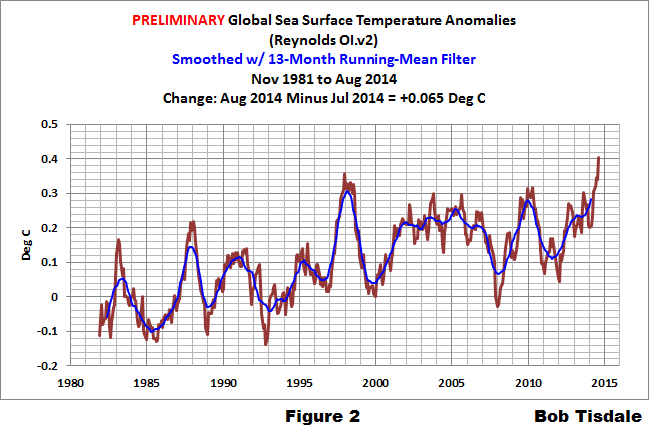 Notice the spike in August. This appears to be due to a rise in the SST of the Northern Pacific. Bob Tisdale attributes this to the anomalous blocking pattern over Alaska and indeed we did have and continue to have colder than climatology temperatures in the Center of North America. So this could be a short-term balancing of heat between land and ocean but I am not so sure. I do not think this is the signature of Global Warming but it may well be related to the changes taking place in the Pacific possibly related to El Nino or the PDO. Not sure I will get into this tonight but there are variations of El Nino Modoki that are consistent with this pattern.

The following map is the mid-atmosphere 7-Day chart rather than the surface highs and lows and weather features. In some cases it provides a clearer and less confusing picture as it shows the major pressure gradients and the 500 MB chart often is a good guide to conditions at the surface.

Notice the “Four Corner’s High”as of today’s forecast i.e. September 8, for a week from now (the graphic is about Day 7) appears to be AWOL. I usually draw a clockwise circle around this High to help imagine how it might impact overall circulation. This may be the last time I show this graphic until next summer as the Southwest Monsoon is about to go on vacation.

Infographic of the Day: Too Late to Learn?

Infographic of the Day: Too Late to Learn?