Is El Nino Back from the Dead?

Back to normal sort of if you conclude that a precipitation forecast that is the exact opposite of the monthly outlook is normal.

And back from the dead perhaps is the 2014 – 2015 El Nino. It still seems to be inconclusive. The suspense is building.

El Niño still a possibility for 2014

The Bureau’s ENSO Tracker remains at WATCH status. This means the chance of an El Niño developing in 2014 is at least 50%, which is double the normal likelihood of an event. Five of the eight climate models surveyed by the Bureau suggest El Niño is likely for spring. However, if El Niño were to occur, it is unlikely to be a strong event.

The Indian Ocean Dipole (IOD) index has been below −0.4 °C (the negative IOD threshold) since mid-June, which means 2014 is now considered a negative IOD year. Model outlooks suggest this negative IOD event is likely to be relatively short-lived, with the Indian Ocean returning to neutral by spring. A negative IOD pattern typically brings wetter winter and spring conditions to inland and southern Australia, and could be countering the effects of the current El Niño-like ocean pattern in the Pacific.”

The SOI Index which basically describes the pattern of convection along the Equator in the Pacific can be found here does not support the presence of an El Nino at this point in time. A monthly average of -8 is usually considered an El Nino condition. But things can change quickly. But right now El Nino conditions are not present although there are hints. August 14th and 15th were very favorable days

Let’s start our review of today’s NOAA ENSO Report by looking at the surface temperature anomalies.

You can see a lot of things here. You can see the Kelvin wave back in the  Jan – June time frame that triggered El Nino-Mania in the popular press. Then you can see the upwelling phase of that same wave that cancelled it out. That wave did not trigger the atmospheric feedback loop that is needed to turn a Kelvin wave into an El Nino. Forecasters hungry to deliver an El Nino got suckered in.  Now you can see a possible mini-Kelvin wave (no dashed lines to indicate that NOAA has declared it to be a Kelvin wave yet) that could resurrect this dying or dead El Nino. If you examine this Hovmoller diagram carefully you can make a pretty good estimate of how long it might take this wave to make it over to Ecuador. I am thinking about three months but then I look at another Hovmoller which describes the wind situation.

I admit that I have difficult interpreting the coding of the wind anomalies for the Eastern Pacific as the two statements on the bottom left confuse me. But I have no difficulty figuring out what they are saying about the Western Pacific. Notice that early in the year we had strong wind bursts from the west that drove the Kelvin waves to the east. Now we have the opposite situation. The Westerlies are weaker than usual. So I do not see how this warm water is going to make it over to Ecuador.

I am not a meteorologist just an economist attempting to read and interpret government issued reports but I am not buying this slight renewal in confidence that Australia has indicated.  Also in terms of reporting the situation. it is really difficult to know if we are talking about the same El Nino event here. To me it looks like the current El Nino has died but there may be another attempt at creating one.

Here is another useful tool.  It  provides a visual representation of the Tropical Pacific both surface temperature and winds absolute and anomalies. One can see what is called the “Cold Tongue” that extends into the Tropical Equator off of Ecuador. This needs to be warmed up for there to be an El Nino.

Notice the imbalance between north of the Equator and south of the Equator. I do not know what that signifies. If I was attempting to bring Climate Change into this discussion I might wonder about the strength of the various northward flowing cold currents along the west coast of South America and how these  might be impacting this El Nino.

But I do not know enough about this subject and the current situation may be normal. But it is a nice graphic that I have used the source being I believe Ohio State University.  This graphic provides a nice overview of the determinants of U.S. climate and the climate of many nations that border the Pacific Ocean. I am not sure what it means that the Western Pacific is quiet other than it probably has less potential to impact the weather in the U.S. as it did for a few weeks recently.  It may be significant re the El Nino forecast as it seemed anomalous for there to be an El Nno developing with a lot of cyclonic activity in the Western Pacific. That is no longer the case.

You can enlarge the below daily (days 3 – 7) weather maps by clicking here.

Notice the low pressure in the north central part of the lower 48 states. This seems to be driving the overall weather pattern for CONUS. The West Coast and southern tier are as if they are located somewhere else as their weather is either not connected to this major feature or is impacted but in a more complicated way.

I am just showing what is called the second week of the 6 – 14 day outlook  but it covers most of the 6 – 14 day period  but it is of course less reliable in general than the 6 – 10 portion of the outlook because it is looking further out into the future.

I think the maps are fairly self-explanatory.  The precipitation forecast is pretty much the total opposite of the previously issued monthly outlook.

I do not feel like trying to explain it other than this is summer and the ability to make predictions during the summer is fairly low. The 6 – 10 day outlook including the discussion for the full 6 – 14 day outlook can always be found here.

We Have Lots of Corn. 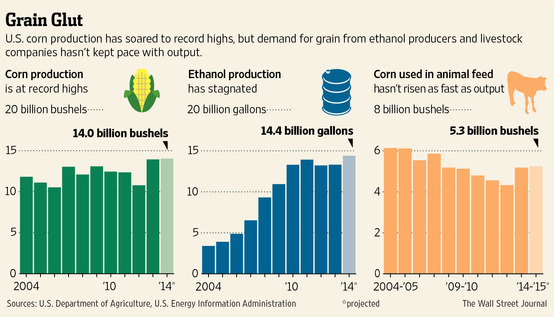 The full story can be found here.  Remember where corn is grown.

It is a fairly concentrated area.

Clearly weather is not the only factor and may not be the primary factor but I do recall some calling for drought in the corn belt. Imagine being long corn futures. Not good.

But the forecast is for cold in Scotland and possibly snow as reported here.  This is all due to impacts from the north. I was going to talk about our oceans today but decided not to but the North Atlantic is not warm as in AMO+. Something may be changing.

The following map is the mid-atmosphere 7-Day chart rather than the surface highs and lows and weather features.  In some cases it provides a clearer and less confusing picture as it shows the major pressure gradients and the 500 MB chart often is a good guide to conditions at the surface.

Notice the “Four Corner’s High”as of today’s forecast i.e. August 18, for a week from now (the graphic is about Day 7)  appears to be kind of a bit east to be in an optimal position to draw in moisture from the Gulf of California.  I draw a clockwise circle around this High to help imagine how it might impact overall circulation.  The wet weather in the Southwest seems to be being driven down and west into the area rather than originating from Mexico. But the local forecasters seem to be interpreting the model results a bit differently but remember everything is relative to climatology so during a wet time of the year what shows up on a anomaly map as neutral can be pretty wet and the same goes for dry times of the year. What might show up as neutral can be pretty dry. Also in the short run and you can see this on some other graphics on this page, when the normal controlling High is displaced this far east there is an opening for low pressure to move in and low pressure systems spin counter-clockwise in the Northern Hemisphere so they then perform a similar function to the Four Corner’s High relative to pulling up moisture from Mexico. But that low is not a permanent feature so its impact is fairly short lived.