The pace of turnover among the nation’s chief executive officers rose in June, as 103 CEOs announced their departures during the month. The June total was up 5 percent from the 98 CEO departures recorded in May. It was 9.6 percent higher than the 94 CEO changes announced the same month a year ago.

Government/non-profit entities, which include universities, foundations, and chambers of commerce, announced 19 CEO changes in June and 102 through the first six months of the year. Men are consistently coming and going in the top spot. Of the 507 replacements Challenger has tracked this year, 424 or 84 percent, were men. This is comparable to last year, when 83 percent of replacements were men.

So far this year, 155 CEOs have left the top spot without a replacement named, 25 of whom were women. The majority of CEOs (185) resigned this year, while another 163 retired. Nineteen executives were ousted and five left amid scandal. Last month, Dov Charney left American Apparel amid accusations of alleged sexual harassment and other inappropriate behavior.  In Massachusetts, the head of the Market Basket supermarket chain was ousted after his cousin wrested control of the board. 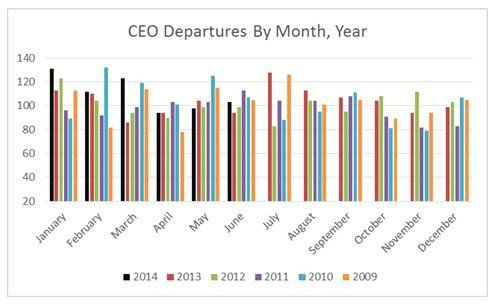 Alternative Measures of Inflation (Part 2): Inflation Versus the Cost of Living