After Stronger-Than-Expected May, Teen Hiring Weakens in June

After getting off to a strong start in May, job gains among teenagers stumbled in June, as employers hired 15 percent fewer 16- to 19-year-olds than a year ago, according to an analysis of the latest data from the Bureau of Labor Statistics.

The number of employed teenagers grew by 661,000 last month, which typically represents the peak of the teen summer hiring period. That was down significantly from June 2013, when 779,000 teens joined the ranks of employed Americans. In 2012, nearly 860,000 teenagers were added to payrolls in June.

The June slowdown followed relatively strong hiring in May, when 217,000 16- to 19-year-olds found employment. That was strongest May hiring activity since 2006, when teen employment grew by 230,000 in the first month of the three-month summer teen hiring surge.

An unusually large teen employment increase of 276,000 in March may have contributed to the lackluster hiring last month. Over the previous decade, teen employment gains in March have averaged 50,000. However, even with the March hiring surge, overall teen employment totaling 5,134,000 in June is still slightly below the 5,143,000 16- to 19-year-olds employed the same month a year ago. Noted John A. Challenger, chief executive officer of Challenger, Gray & Christmas:

Despite weaker employment gains this year, the teen unemployment rate has fallen. While it was at a relatively high 23.9 percent as of June, this is lower than the 26.6 percent recorded in June 2013. This suggests that fewer teens are even seeking summer employment. Indeed, a June participation rate of 40.5 percent is just off the record low for this month, which is 40.3 percent, recorded in June 2010 and again in June 2011.

Teen participation in the labor force has been falling steadily since the late 1970s, according to figures from the Bureau of Labor Statistics. While some of those dropping out of the labor force are doing so out of job-search frustration, studies indicate that a growing number of teens are devoting more time to sports, school and volunteering during the summer months.

However, these activities may not be as beneficial as traditional employment, as Challenger recently told the New York Times.

A lot of kids are missing out by not learning what working is. They’re also missing the process of job hunting. Part of the experience is developing persistence and the all-important skills of shaking hands, answering questions clearly and looking someone in the eye.”

Even though the summer is almost half over, it is not too late to find a job.

The job categories where teen job seekers have the most success tend to have higher-than-average turnover. Some workers might go on extended family vacations. Others might go back to school early. Many simply don’t end up being a good fit and leave either voluntarily or involuntarily. Those who are willing to work during the school year, might be able to get their foot in the door as a substitute or replacement.

Teenagers who have not had much luck in the traditional job market may want to take a more entrepreneurial approach, offering their services as lawn mowers, dog walkers, baby sitters, etc. Whether teen job seekers take a traditional path or one that is more entrepreneurial, the biggest mistake they can make is taking a passive approach. Waiting for a neighbor to come around and ask you to mow the lawn is just as ineffective as filling out an online application and waiting for the phone to ring. The job opportunities are not simply going to come to you. In this job market, you have to go out and aggressively pursue those opportunities. 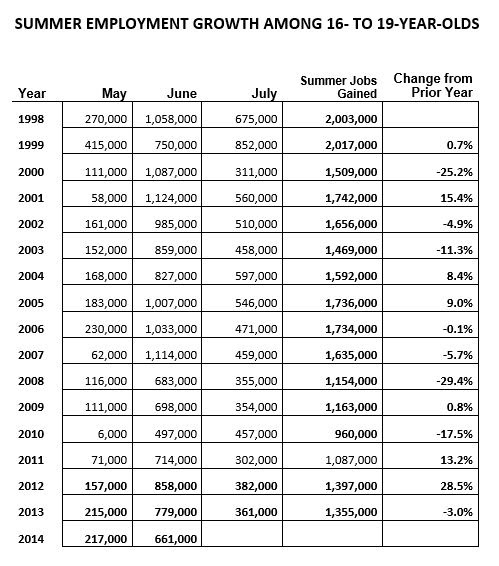 May 2014 JOLTS Continues to Predict Solid Job Growth to Come