For this year’s crop of college graduates, the use of social media is second nature. However, will these grads’ comfort with sharing their lives on Facebook, Twitter and Instagram come back to haunt them as they search for their first job? Not necessarily …..

In a poll of 100 human resources executives, 60 percent confirmed that they either always or sometimes check candidates’ social media activity, but only 6 percent said that activity has a significant impact on their hiring decision. 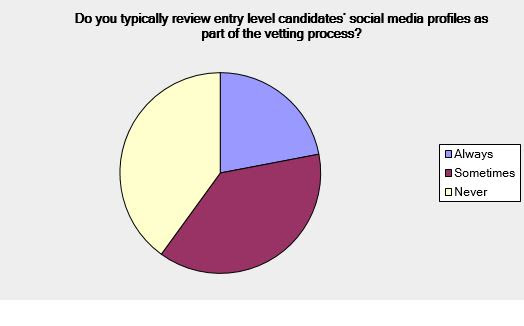 Social media has been around for a decade now. Many of the hiring managers making employment decisions are themselves heavy users of Facebook and Twitter. There is more understanding of these communication tools, as well as the realization that if you eliminate every candidate with problematic Facebook or Twitter posts, you would quickly run out of candidates.

Of course, when you are job searching, there is no way of telling how a prospective employer treats or reacts to social media impressions. As with most endeavors, it is probably best to err on the side of caution and consider your social media activity as an open book that will be factored into hiring decisions.

Even among the roughly 40 percent of executives who said that a candidate’s social media activity has nearly no impact or no impact at all in hiring decisions, there are likely to be exceptions if they spot something that is overtly offensive or controversial. Particularly when it comes down to a handful of qualified candidates, hiring managers will tend to gravitate toward those that did not raise any red flags.

While 40 percent of respondents to the Challenger survey indicated that social media activity has little to no impact on hiring decisions, another 40 percent said it has some impact. 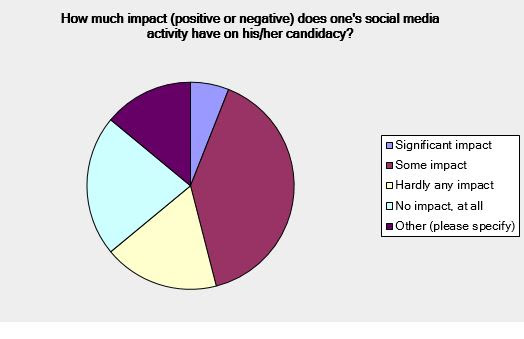 If hiring managers are taking the time to investigate candidates’ social media activities, there is a reason. It may tell you a little more about the candidate than was revealed in the interview process. That may not necessarily be a bad thing. For example, if your Facebook page reveals a history of volunteer work that was overlooked, it could benefit the job seeker.

With that in mind, Challenger advises job seekers to use their social networking as another part of their personal marketing materials.

“Whether you are a soon-to-be college graduate looking for your first job or a 10-year veteran in transition, it is important to embrace social media as a way to discover new jobs, connect with potential employers and influencers, and enhance your image as a job candidate.

Using Twitter/LinkedIn To Find A Job

Build your network. Challenger coaches advise job seekers to utilize every person in your personal and professional networks. With Twitter, you can grow this network to include hundreds of people.

Build your brand. Your Twitter page can show a little something about yourself with the pictures and colors you choose to use. The interface allows you to post links to websites or blogs, so when building your Twitter or Facebook pages, make sure to include links to these. Start a blog discussing industry trends as you see them. Include discussions about your work. Basically, talk yourself up. You are a product employers must have.

Participate in the online community. It’s not enough to have a presence on these sites; you must also actively participate. Comment on someone’s work. Endorse someone. Start a discussion. Post a photo or link to a provocative article. Write a blog post. Active users get more views and therefore, more opportunities to connect with employers.

Think before you post. Posting to Twitter, Facebook, LinkedIn, etc., is often a spur of the moment action; a gut response to something. However, it is important to take five minutes and give your post some consideration. Not only consider the target audience, but think about who might possibly see it now and in the future. Is it something you wouldn’t hesitate to say to a potential employer? Also consider how posts might be perceived. In the case of Twitter, for instance, 140 characters limits your literary ability. What you read as witty, another might read as acerbic. What you think is funny, someone else might thing is offensive.

Get Recommended. LinkedIn allows users the ability to recommend each other’s work. As professional networking sites become the new resume, ask colleagues to advocate on your behalf on your LinkedIn profile. Recruiters trolling these sites are much more likely to be impressed if past colleagues rave about your performance.

Post Your Work. LinkedIn launched a new place on your profile to post links to or upload files of specific projects on which you are working. You can share similar links and files on FB and Twitter. Make sure to include your best work on your profiles in order to give recruiters and employers a taste of your abilities.

Join Groups. LinkedIn also allows users to create and join professional groups, allowing you to instantly communicate with others in your field. Join up, and start building those relationships.