Conditions are expected to improve for college graduates entering the job market this spring, as the economic recovery continues to gain momentum. In fact, nearly two out of three employers surveyed plan to hire from among this year’s crop of 1.8 million grads.

In the survey conducted among 100 human resources professionals in early April by global outplacement and coaching consultancy Challenger, Gray & Christmas, Inc., 64 percent of respondents said their companies plan to recruit from the pool of graduates entering the job market this spring. Twelve percent of respondents said that while they have recruited college graduates in the past, there are no plans to do so this year. About 10 percent said they never recruit college graduates, preferring candidates with “a few years” of work experience. Said John A. Challenger, chief executive officer of Challenger, Gray & Christmas:

This is the first year we have conducted this survey. So, while we do not have comparable data from previous years, the fact that a majority of respondents reported plans to hire college graduates is certainly a positive sign for this year’s pool of entry-level job seekers. This, combined with continued improvements in the overall economy, contributed to an optimistic outlook for this year’s graduates.

Last month, after 51 consecutive months of net job gains, private-sector employment finally surpassed the pre-recession peak. Over the past year, an average 4,525,000 Americans were hired each month. In February, after hiring nearly 4.6 million new workers, employers still had about 4.2 million unfilled job openings. All of these trends bode well for those entering the job market this spring.

Meanwhile, the March unemployment rate among the nation’s approximately 2.5 million 16- to 24-year-olds with a bachelor’s degree or higher who are not enrolled in school was 6.8 percent; virtually equal to the overall national average. Furthermore, 84 percent of the nearly 2.2 million employed members of this group hold full-time positions.

Employers are still rebuilding their workforces in the wake of the Great Recession. Entry level workers are an important part of the hiring mix, as they are needed not only to help meet immediate demand, but also to begin the process of shaping the organization’s future leadership.

Indeed, 72 percent of respondents to the Challenger survey indicated that college graduates were very important or somewhat important to their organization’s overall recruiting and workforce development strategy.

While the overall outlook for college graduates continues to improve, the job search will not be easy, by any means. It is likely that they will be competing for entry-level job opportunities with those who have been in the workforce for one to five years. They may even be competing with older workers. The job search for this year’s graduates will definitely require an aggressive approach. 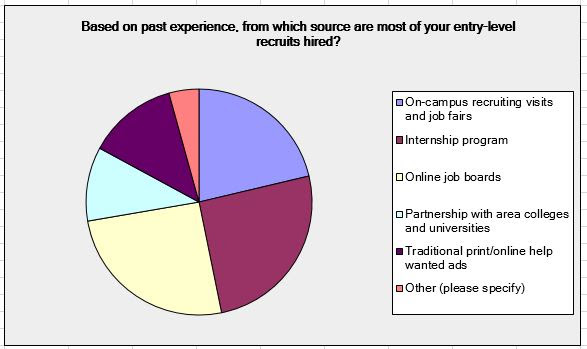 Soon-to-be graduates cannot expect to hand out a few resumes at job fairs and reply to some online postings and simply wait for a phone call or email. As our survey results show, job fairs and online job boards have their place, but to be successful a well-rounded strategy is required.

One of the most important elements of a successful job search, for both entry-level job seekers and their more-experienced counterparts, is networking and meeting face-to-face with people who can help advance the job search. College graduates who believe they are too young to have an effective network are simply wrong. Parents, professors, former internship supervisors and even college and former high school classmates can be valuable sources when it comes to building and expanding one’s network.

Graduates or soon-to-be graduates should not confine their searches to a specific industry or occupation. The job market is not robust enough to provide the ideal job situation for every individual. It seldom is. So, someone may come out of college with the plan to find a marketing position with a consumer products company. There’s nothing wrong with having a specific goal, but graduates should not make the mistake of adhering to it so closely that they overlook opportunities in marketing for a chemical company or health care provider, for example. 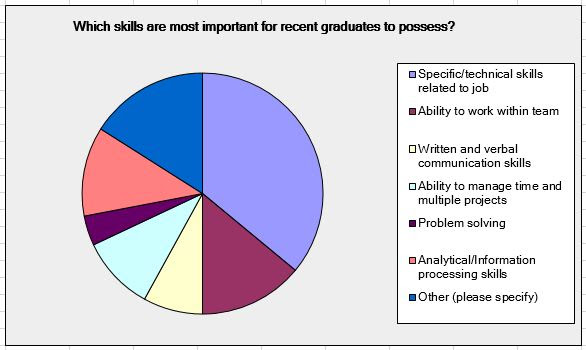 While soft skills like ability to work within a team and communication skills ranked among the most important for graduates to possess, the largest portion (36 percent) of employers surveyed by Challenger said that specific/technical skills related to the job were the most important. Ability to work in a team environment was selected by 14 percent of respondents. Surprisingly, having strong written/verbal communication skills was selected by just 8.0 percent or respondents, and problem solving was the most important skill for just 4.0 percent.

Does your company plan to recruit from the pool of college graduates this spring? 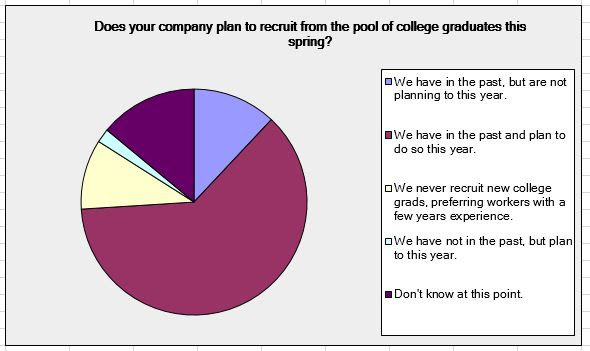 How important are recent college graduates to your overall recruiting and workforce development strategy?

Based on past experience, from which source are most of your entry-level recruits hired?

Which skills are most important for recent graduates to possess?