by Larry Doyle, Sense on Cents

Among various reports that I look for on an annual basis, I appreciate the Rule of Law Index produced by the World Justice Project as much as any.

Why do I anticipate reading and reviewing this report so much? Because we are a nation of laws and not of men. At least I think we are . . . although sometimes I wonder. As the WJP highlights:

“Effective rule of law helps reduce corruption, alleviate poverty, improve public health and education, and protect people from injustices and dangers large and small,” said William H. Neukom, WJP Founder and CEO. “Wherever we come from, the rule of law can always be strengthened.”

The Index is the most comprehensive index of its kind and the only to rely solely on primary data.

The more serious students in the audience may care to review the entire report. For those who might care for an abbreviated version of how the United States is doing, I welcome informing you of the following:

Our overall rank across all factors measured: 19th out of 99 nations. But let’s dig a little deeper and be a little more rigorous in our review. On a regional basis the USA is little better than average and relative to those nations with similar income levels, we consistently rank near the lower third if not worse than that by most measures. 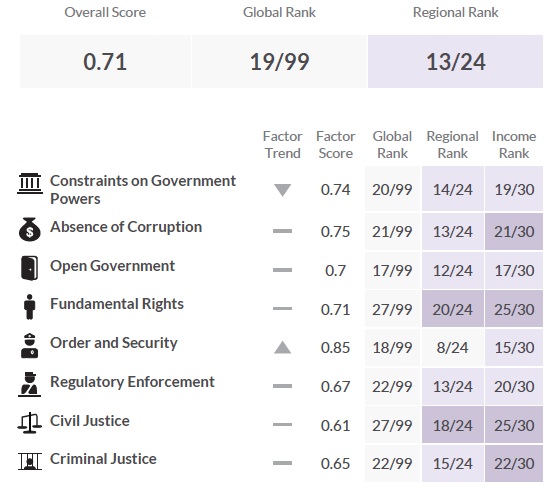 A great nation? True leaders and statesmen know that a nation needs to uphold and embrace the rule of law, protect property rights, and expose corruption in order to be a nation worthy of being called ‘great.’

We have a lot of work to do.

Additionally, the following line jumps out of the report on page 46:

“The United States saw a significant decline during the past year in people’s trust in the system of checks and balances and the protection of the right to privacy.”

Trust is the cornerstone of our markets, our economy, and ultimately our nation.

Is it any real surprise given all that we have witnessed, not only over the last year but preceding years as well, why people are less trustworthy about our system of checks and balances in America? Think of the massive abuses of power – with little meaningful accountability and truth – that have weighed upon our nation.

In thinking of all that we have experienced since the crisis that was centered on Wall Street and ran across our nation and the global economy, I think we should reflect on the concluding remark from this piece entitled, Perspectives on the Constitution:

. . . democratic republics are not merely founded upon the consent of the people, they are also absolutely dependent upon the active and informed involvement of the people for their continued good health.