A Few Thoughts on the Recent Deceleration of Student Loan Debt

While the amount of student loan debt outstanding has continued to rise in recent quarters, its rate of growth has slowed recently–from more than 12 percent over the four quarters ending in the second quarter of 2012 to a pace of 8-1/4 percent in 2013. This note discusses the role that a few factors have likely played in the recent deceleration of student debt and considers their future trajectories. We read the indicators as, on balance, suggesting that the more-rapid expansion of student debt observed through mid-2012 is not likely to soon return. That said, we expect student loan originations to remain sizable in coming years.

The first factor contributing to the deceleration in student debt since mid-2012 is, in a sense, mechanical. Outstanding student loan debt rose nearly 70 percent over the past five years. Thus, in recent years (and prospectively), the growth rate of student loans–measured as the percent change in outstanding loan balances–tended to move lower over time even as the volume of new loan originations–measured in billions of dollars–remained close to the robust pace over that period of strong growth. Indeed, as shown in Figure 1, originations of federal loans, which have represented the vast majority of new originations of student loans in recent years, stabilized near the record-highs observed in the 2011-12 school year and are projected (by the Department of Education) to be about flat for 2013-14 and 2014-15, rather than continuing to trend higher. Such projections for federal student loan originations would imply that the overall growth rate in debt outstanding to continue to be lower than the rapid pace seen through early 2012. 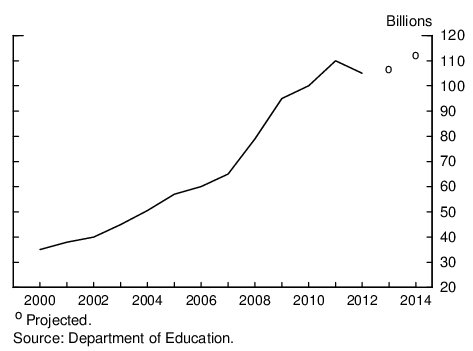 We think that a fundamental factor behind the recent flattening out of student loan originations has been the contour of college enrollment. Figure 2 shows that, after having increased rapidly, on net, between 2007 and 2010, overall college enrollment ticked down in 2011 and 2012. This pattern is broadly consistent with the notion that job prospects are a key consideration for people deciding whether or not to pursue higher education. As expected, during the recession, labor market conditions deteriorated substantially and continued to be quite adverse in the earlier phase of the macroeconomic recovery. More recently, however, labor market conditions have improved on the whole. Looking ahead, we do not expect such cyclical developments in the labor market to produce fundamental changes in the levels of college enrollment.

Another factor that appears to have contributed importantly to the recent deceleration in student loan debt is that the large cohort of students associated with the outsized enrollment of the latter 2000s has entered the repayment period for their loans.1 As shown in Figure 3, data from the Federal Reserve Bank of New York’s Consumer Credit Panel/Equifax indicate that the share of student loans in repayment climbed significantly over the past year or so, reaching its highest level since 2005. All else equal, an increased pace of debt repayment would be expected to push down the growth rate of student debt. 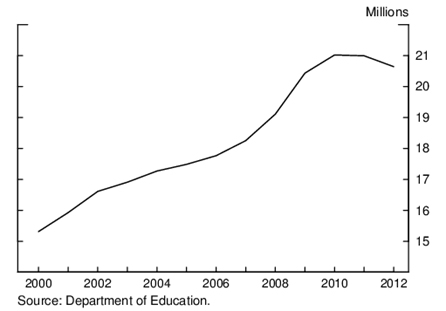 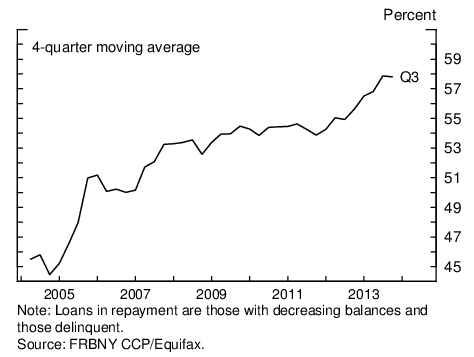 In addition, we think there is another factor that will continue to support sizable student loan originations in coming years–namely, steady increases in tuition and other costs of higher education. Figure 4 documents the fairly steep upward trend in the (annual average) costs of attending public, four-year colleges and shows the College Board’s current projections.2 High and rising costs of higher education are likely to lead to continue supporting strong demand for student loans in the medium term. 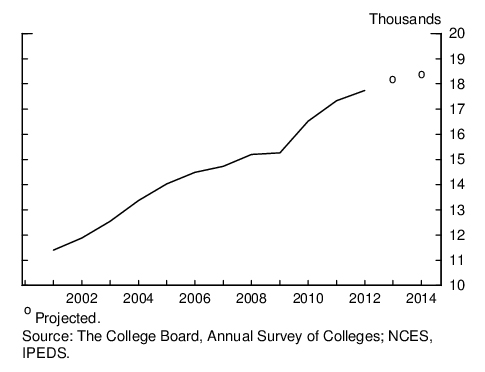 To summarize, a flattening out in the volume of student loan originations and college enrollment, along with increasing repayment rates on existing loans appear to have contributed importantly to the recent noticeable deceleration in student loans. We currently expect those trends to continue over the next few years, but we also anticipate sizable originations of student loans in coming years, reflecting persistently elevated levels of college enrollment and further rises in the costs of higher education.

1. Student loan borrowers typically begin repaying their debt six months after graduation. Thus, a substantial share (or even the majority) of the large volume of student loans originated since 2008 will soon be in the repayment phase. Return to text

2. Costs of attending two-year public colleges and most of the private colleges exhibit a similar upward trend. Return to text

Disclaimer: FEDS Notes are articles in which Board economists offer their own views and present analysis on a range of topics in economics and finance. These articles are shorter and less technically oriented than FEDS Working Papers.

Why Has Iceland Withdrawn EU Bid?

Why Has Iceland Withdrawn EU Bid?