Econintersect: The first weeks of each month are slow for real estate news – but the news of the week will likely be the report from Transunion that mortgage deliquencies have increased.  According to their press release:

The national mortgage delinquency rate (the rate of borrowers 60 or more days past due) increased for the first time since the end of 2009, edging upward to 5.88% at the end of the third quarter in 2011.

Transunion goes on to rationalize why deliquencies were rising: “Until this quarter, we had seen six straight quarters where progressively more people were able to make their mortgage payments on time. We expected that trend to continue given recent, relatively more conservative lending policies and the apparent stabilization of both home values and unemployment,” said Tim Martin, group vice president of U.S. Housing in TransUnion’s financial services business unit. “However, in the third quarter, the consumer was hit with several unanticipated shocks, including the U.S. credit rating downgrade, stock price declines, European debt concerns, stubbornly high unemployment, more downward pressure on home values and low consumer confidence. All of this affects a borrower’s net worth and desire, or ability, to continue making house payments — especially if they are facing negative equity in their homes due to price depreciation.”

However, put into perspective – this is one month of contrary data to the existing slightly improving data.   The graph below from Transunion puts this into perspective.

“Treasury rates dropped last week, as renewed turmoil in Europe once again led to a flight to quality, and 30-year mortgage rates dropped to their second lowest level of the year. Refinance applications jumped more than 12 percent to their highest level in a month and some lenders experienced even larger increases. As has been the case all year, many refinance applicants are opting to deleverage by choosing 15-year mortgages.”

The refinance share of conventional activity increased to 78.6 from 77.1 the previous week. Thirty percent of all home purchases are for cash – so mortgages are involved in 70% of the transactions in housing market.

The average contract interest rate for 30-year fixed-rate mortgages with conforming loan balances ($417,500 or less) decreased to 4.22% from 4.31%. Hat tip to Calculated Risk for the graphic below. 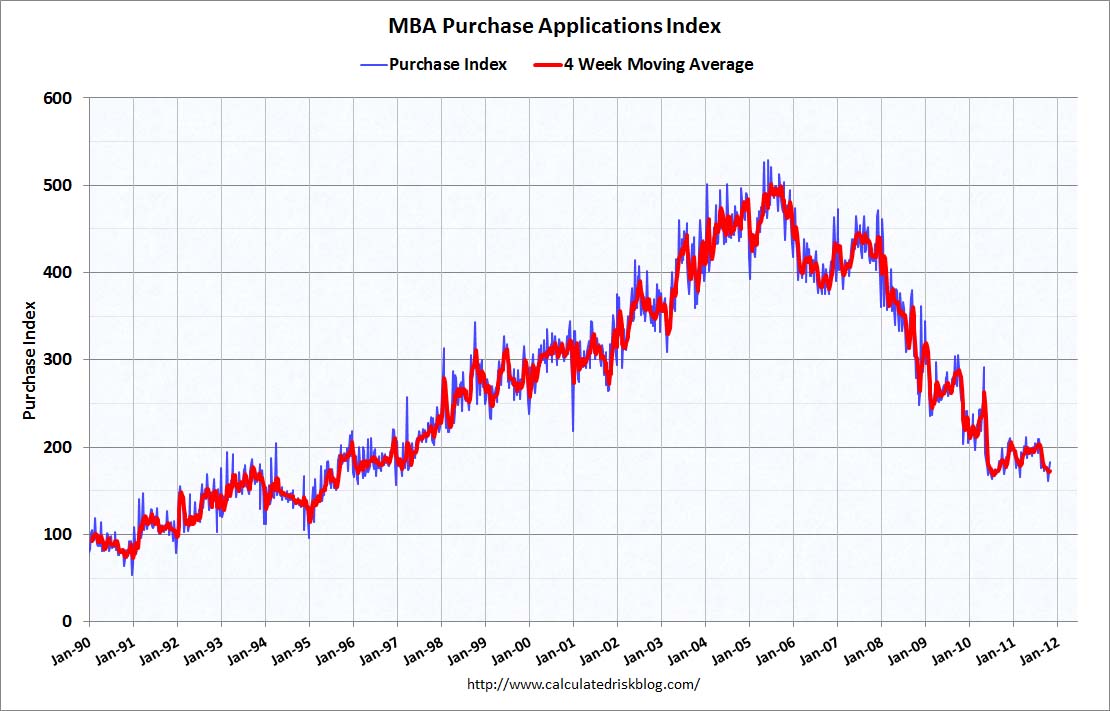 Do Harvard’s Econ Students Have a Point?