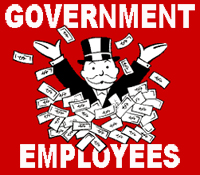 Econintersect:  Charts of the Day at Business Insider produced a graphic today showing the shrinking Federal Employment and commenting:

Another myth debunked: Contrary to your belief that the Federal government is growing and growing in terms of its role in the government, it turns out that in one crucial respect, it’s actually shrinking.

As a share of all workers, Federal workers have been declining pretty steadily over the last several decades. That number has risen a little bit under Obama — due to some growth in the Federal workforce and the dramatic shrinking of the private workforce — but the ratio is still near the all-time rock bottom.

Whilst true that Federal employment is falling as a percentage of all workers,  it is a misleading statistic.  The Congress has been shifting execution and administrative responsibilities of its laws from the Federal Government to the States / local governments.    The following chart shows the ratio of all government workers (USA Federal, State and local workers) to total U.S. population:

If the drop in total government employment continues, President Obama’s administration will have the largest contraction since the Reagan administration.
Disclosure:  Global Economic Intersection is a contributor to Business Insider.
source: Charts of the Day
Previous Post

A Tale of Two Centuries

A Tale of Two Centuries