Econintersect:  Many do not know where the most severe earthquake in U.S. history occurred.  Many of those who think they know the answer will probably name the 1906 San Fransisco quake.  Others will say it was Anchorage in 1964.  Those naming Anchorage would be right.  The San Fransisco disaster ranks 17th on th U.S. historical list.

Second in the U.S. to the 1964 Anchorage quake, which was the second strongest in recorded world history, was a 1700 earthquake over a massive area of the Pacific northwest which had tremors felt as far away as Japan.  In fact, it is the written record of those Japanese shocks which date the event to January 26, 1700.

Here is an earthquake risk map of the U.S. from the Daily Mail: 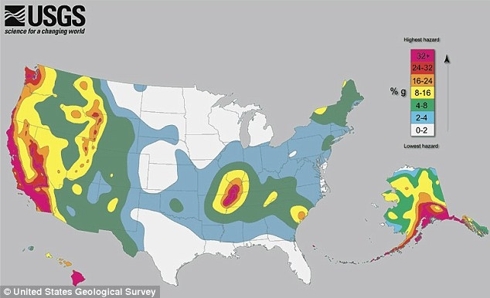 From The Daily Mail:

The earthquake map of America: A seismic map shows that living far from the West Coast is no guarantee of safety from earthquakes. The colour-coordinated map shows a high probability of earthquakes along the West Coast – but it also shows an alarming patch of red at the ‘New Madrid fault line straddling Tennessee, Arkansas, Missouri, Illinois and Kentucky, in a dangerous patch that spreads outwards all the way to the South Carolina coast.

The historical record from the USGS (U.S. Geological Service) has data for 226 U.S. earthquakes, which also contains very limited overlap with Canada and Mexico for shared events.  That data is summarized in the following table.

The extent of the potential for earthquakes outside the Ring of Fire areas of the U.S. from California to Alaska is generally not appreciated.  Hawaii has a large risk since it is essentially a group of volcanos and Yellowstone is one giant volcano, possibly one of the largest ever to exist on the planet.  But the earthquake activity in the center of the nation and postential for future risk is less well known.  The potential for that region can be understood when it is recognized that the 7.7 earthquakes near New Madrid, MO in 1811 and 1812 reversed the flow of the Mississippi River and changed its course by miles.  Tremors were felt as far away as Boston, where church bells were rung by the shaking.  Sidewalks in Washington, DC were damaged, according to Wikipedia.

The major earthquake appearing in the “Other” column was in Charleston, SC.  It was a 7.3 magnitude event occurring on August 31 – September 1, 1886.  Major destruction of life and property occurred, with and soil liquification and sand blows produced.  According to Wikipedia, damages totalled over $100 million and between 60 and 110 lives were lost.  The picture at the beginning of this article is from Charleston following that quake.

The Charleston quake occurred from a shift of ancient fault lines.  Many similar fault lines with built up residual stress may exist along the the eastern U.S. coast.  There is little knowledge of what faults actually exist or where they are located.  Thus the USGS earthquake risk map is subject to much uncertainty.

One area of the east coast of the U.S. which may have another source of earthquake activity is the Adirondack Mountains, which, along with Quebec’s Laurentians, are the only “new” mountains in eastern North America.  These mountains are the result of a geologically recent upthrust dome and are still gaining elevation in a way characteristic of “young” mountains.

Far East Stocks Up Across the Board in Early Friday Trading

European Stocks End the Week with an Up Day

European Stocks End the Week with an Up Day