The number of shareholder-owned US corporations is in steep decline, falling from 7,507 in 1997 to 3,766 by 2015. Thus, Kathleen M. Kahle and René M. Stulz ask “Is the US Public Corporation in Trouble?” in their article in the Summer 2017 Journal of Economic Perspectives (31:3, pp. 67-88). (Full disclosure: I’ve been Managing Editor of JEP since its inception in 1987, and thus may be predisposed to believe that the articles appearing there are worth reading! All articles in JEP, from the most recent issue back to the first, are freely available online compliments of its publisher, the American Economic Association.)

The blue line in this figure shows the number of publicly-trades US corporations. The bars show (inflation-adjusted) market capitalization–that is, the total value if you take all the shares of all the companies and multiply by the price of the shares. 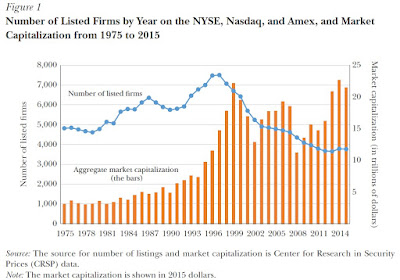 Kahle and Stulz consider the evidence on US corporations along a number of dimensions. Here are a few of their points that caught my eye: 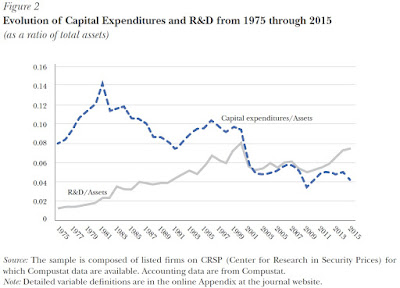 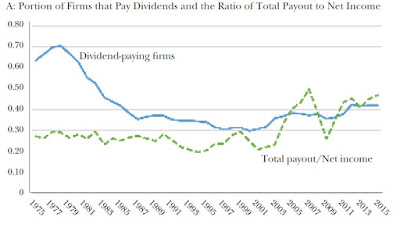 In 1962, Richard Nixon announced that he was leaving politics and told the assembled journalists, with whom he had had a relationship that could politely be described as “adversarial“:

“Just think how much you’re going to be missing. You don’t have Nixon to kick around any more.“

Of course, Nixon came back, and I expect that the US public corporation will come back, as well. But even for those who like to kick around the public corporation, these patterns should offer some cause for concern. The public corporation, for all its warts and flaws, has been a primary engine of US economic growth for more than a century. When it no longer makes economic sense for most small firms to become public corporations, when the number of firms is being continually depleted by mergers, and when large firms are often paying out a larger share of their income or hoarding cash rather than investing, these are all legitimate causes for public concern.

The Kahle-Stulz paper is the first of four in a “Symposium about the Modern Corporation” in the Summer 2017 issue of JEP, and those interested in the subject will want to check out the other papers, too. Lucian A. Bebchuk, Alma Cohen, and Scott Hirst discuss “The Agency Problems of Institutional Investors (pp. 89-102). The traditional problem of corporate governance has been what economists called “the separation of ownership and control”,  which refers to the fact that while shareholders technically own corporations, a very large number of relatively small shareholders are likely to have a hard time actually controlling the corporation. Instead, top executives and boards of directors may be able to cooperate in back-scratching arrangements that make their own lives easier. However, in recent years, large blocks of stock are owned by “institutional” investors, like the giant stock market index funds. Unlike the much smaller shareholders of the past, the large institutional investors have some power to exert control over large companies–but they may have much incentive to do so. After all, one large indexed mutual fund gets no advantage over other large indexed mutual funds by exercising oversight over corporations. No matter what one index fund does, or doesn’t do, investors in index funds just get the overall average market outcome. Luigi Zingales offers some thoughts “Towards a Political Theory of the Firm” (pp. 113-30). He writes of the dangers of a “Medici vicious circle,” which can be described in the slogan: “Money to get power. Power to protect money.” He writes:

“The ideal state of affairs is a “goldilocks” balance between the power of the state and the power of firms. If the state is too weak to enforce property rights, then firms will either resort to enforcing these rights by themselves (through private violence) or collapse. If a state is too strong, rather than enforcing property rights it will be tempted to expropriate from firms. When firms are too weak vis-à-vis the state, they risk being expropriated, if not formally (with a transfer of property rights to the government), then substantially (when the state demands a large portion of the returns to any investment). But when firms are too strong vis-à-vis the state, they may shape the definition of property rights and its enforcement in their own interest and not in the interest of the public at large, as in the Mickey Mouse Copyright Act example. …

“While the perfect “goldilocks” balance is an unattainable ideal, given that ongoing events will expose the tradeoffs in any given approach, the countries closest to this ideal are probably the Scandinavian countries today and the United States in the second part of the twentieth century. Crucial to the success of a goldilocks balance is a strong administrative state, which operates according to the principal of impartiality (Rothstein 2011) and a competitive private sector economy.”

Anat R. Admati provides “A Skeptical View of Financialized Corporate Governance” (pp. 131-50). She points out that the modern corporation has often sought to provide appropriate incentives to top corporate executives by linking their compensation to various financial measures, like stock market prices. However, she argues that this approach can in many cases provide misguided incentives, and does not seem to limit or hinder an ongoing parade of corporate scandals. From the abstract:

“Managerial compensation typically relies on financial yardsticks, such as profits, stock prices, and return on equity, to achieve alignment between the interests of managers and shareholders. But financialized governance may not actually work well for most shareholders, and even when it does, significant tradeoffs and inefficiencies can arise from the conflict between maximizing financialized measures and society’s broader interests. Effective governance requires that those in control are accountable for actions they take. However, those who control and benefit most from corporations’ success are often able to avoid accountability. The history of corporate governance includes a parade of scandals and crises that have caused significant harm. After each, most key individuals tend to minimize their own culpability. Common claims from executives, boards of directors, auditors, rating agencies, politicians, and regulators include “we just didn’t know,” “we couldn’t have predicted,” or “it was just a few bad apples.” Economists, as well, may react to corporate scandals and crises with their own version of “we just didn’t know,” as their models had ruled out certain possibilities. Effective governance of institutions in the private and public sectors should make it much more difficult for individuals in these institutions to get away with claiming that harm was out of their control when in reality they had encouraged or enabled harmful misconduct, and ought to have taken action to prevent it.”

America: What Did Aristotle Mean?

America: What Did Aristotle Mean?