The Tightening US Labor Market Lie

Janet Yellen’s reputed favorite jobs measure, the JOLTS (Job Openings and Labor Turnover Survey) reported blockbuster record job openings in May. But look beneath the headlines and you will see just how distorted and maladjusted the US job market is.

Wall Street economic shills and Fed propagandists have recently been claiming that a tightening job market is driving faster wage growth. With apologies to Elvis, we’ve already established that that was just a lie. The rising wage story doesn’t hunt. It ain’t nothin’ but a hound dog.

Job openings have soared to record highs, beyond even the housing bubble peak as the massive and growing ZIRP/QE driven credit bubble drives demand for rocket scientist financial engineers on the one hand, and low paid, low skilled worker drones servicing the financial engineering bubble nouveau riche of the on the other. 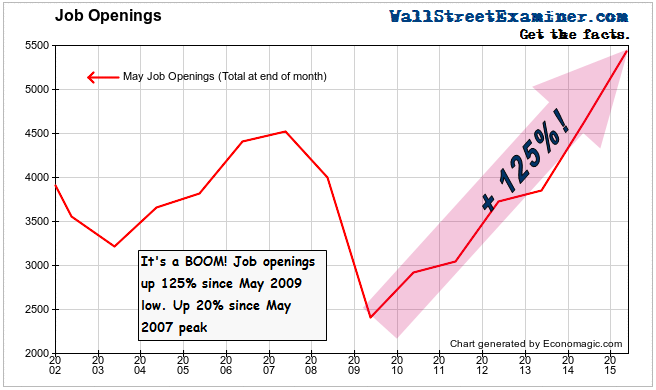 Click to enlarge.
Note: Job openings are postings as of the last day of month. 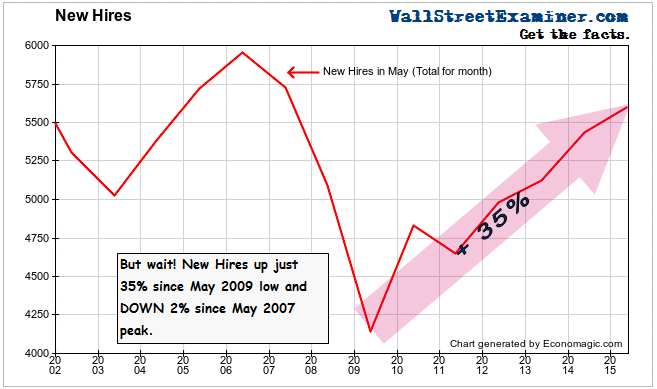 Click to enlarge.
Note: Hires are total for the month.

As a result, the ratio of hiring to job openings has plummeted to an all time low as the mismatch grows between the demand for labor and the ability and willingness of the labor force to meet the offerings of employers. To put it bluntly, would-be workers see too many job openings that are just BS.

If the labor market were truly tightening, wages would be rising faster. In fact, while wages are not falling outright, the growth rate of wages is, again falling below the CPI inflation rate in recent months. 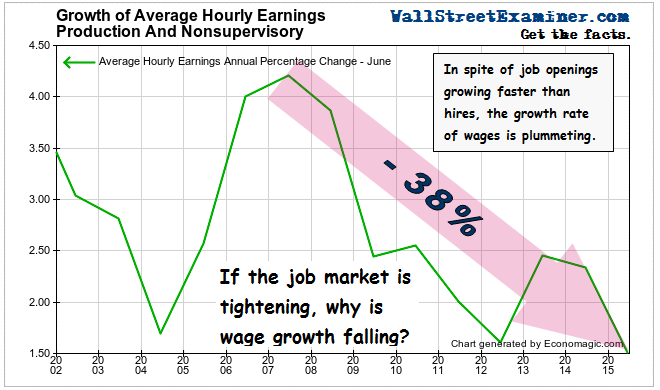 
The fact that job openings are rising faster than hires, and wage growth is simultaneously falling, is evidence of the growing mismatch between the jobs being offered and the ability and willingness of the labor force to fill them. The US economy is growing ever more distorted and maladjusted.

These trends began with the institution of ZIRP and QE. The irrational investment incentives those policies promote may or may not be the direct cause of the growing divergence between job openings and hires, but they have certainly contributed to the negative trends. Whether any future policy can reverse or even ameliorate these trends, remains to be seen. The current path is a sobering, if not frightening one, and the track record of Fed and government policy makers to this point does not inspire confidence in the future.

What Doesn’t Kill Them Makes them Stronger

What Doesn't Kill Them Makes them Stronger