The wealth distribution is not the income distribution: wealth is the accumulation of assets over time, while income is typically measured as what a household receives during a year. No one should expect wealth to be equal at a point in time, because there is no reason to expect that the typical 55 or 60 year-old will have accumulated the same assets over time as the typical 25 or 30 year-old. But that said, when the overall distribution of wealth is shifting over time, it is a legitimate cause for concern.

Fabian T. Pfeffer, Sheldon Danziger and Robert F. Schoeni offer an overview of the evidence in “Wealth Levels, Wealth Inequality, and the Great Recession,” a short June 2014 “Research Summary” written for the Russell Sage Foundation. The more detailed research paper, “Wealth Disparities Before and After the Great Recession,” appeared last year in The ANNALS of the American Academy of Political and Social Science (November 2013, v. 650, pp. 98-123), which doesn’t seem to be freely available on-line, although some readers will have access through library subscriptions

Much of this research draws on data from the Panel Study of Income Dynamics, a fascinating data set that started with a nationally representative sample of 18,000 people in 5,000 families back in 1968, and since then has tracked that group of families over time, together with their children and grandchildren, and marriages and remarriages. The survey now covers about 9,000 families and 22,000 individuals. Thus, rather than taking snapshots of people over time, like most economic data, this PSID tracks households over time

Here’s the change in wealth over time based on PSID data. The data is shown by percentiles. Thus, the 95th percentile of the wealth distribution saw its wealth rise by more than 100% in inflation-adjusted dollars from 1984-2007, before a drop-off when the Great Recession hit. The median household saw it’s wealth rise by almost 50% from 1984 to 2007, but the decline in wealth since then means the median has less wealth today than in 1984. The 25th percentile doesn’t have much wealth, and saw little change in its wealth from 1984 to about 2005, but then saw a drop with the Great Recession. Clearly, this pattern shows a greater dispersion of wealth over time. 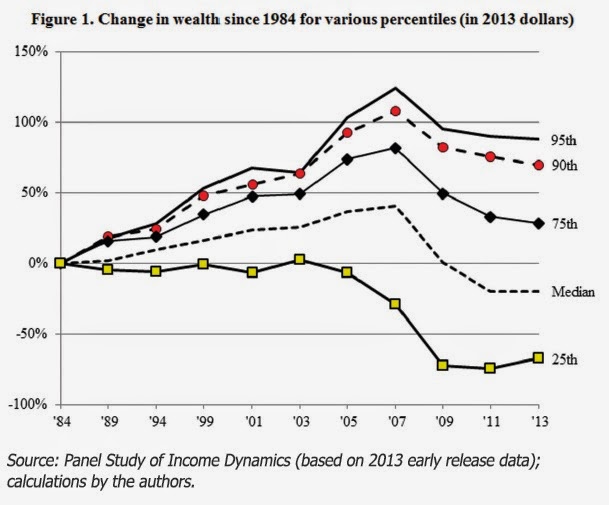 However, in the research paper these authors point out that a different source for looking at the distribution of wealth, the Survey of Consumer Finances done o has somewhat different findings for those at the bottom of the wealth distribution. The SCF is done opnce every three years for the Federal Reserve, and it is a nationally representative survey that looks at about 6,500 households–although it looks at different ones each time

This chart is one I created by cutting a few columns from the chart in their paper, for ease of readability. Notice that both sources of data show a similar rise in wealth inequality over time as measured by the Gini coefficient. The other measures of inequality are percentile ratios. For example, the first row looks at the ratio of wealth for the 50th percentile compared to the 25th percentile: that ratio was 8.7 in 2003, but rose to 31.3 by 2010, according to the PSID data. What jumps out at me from this table is that the percentile ratios are fairly similar in both data sets if one is comparing to the 50th percentile or the 75th percentile but the inequalities look much larger in the PSID when comparing to the 25th percentile. 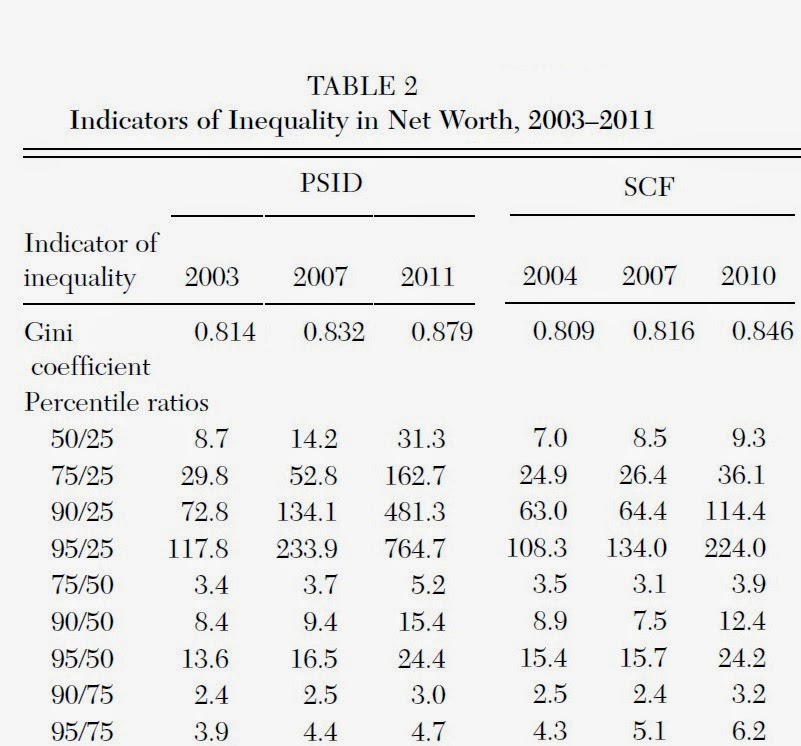 In the short term of a few years, like the time from the Great Recession to the present, the distribution of wealth is essentially driven by the value of people’s assets: both financial assets and housing prices. No income group has recovered from the negative effects of the Great Recession on wealth. But those at higher wealth levels were already ahead of the game, and those with near-zero wealth levels are even farther behind.

Is The S&P 500 Statistically Different?