Is Raising the Federal Funds Rate a Done Deal?

I am amused by the constant discussion by the Federal Reserve governors and the Fed Chair about raising the federal funds rate. As next week is the last FOMC meeting of the year – this is the last chance for the Fed to begin to “normalize” interest rates this year.

During the Great Recession, the Fed reduced the federal funds rate to literally zero percent to “stimulate the economy”. These zero rates continue to the present time. In the United States, the federal funds rate is “the interest rate” at which depository institutions (banks and credit unions) actively trade balances held at the Federal Reserve, called federal funds, with each other, usually overnight, on an uncollateralized basis.

The purpose of this “lending window” is to provide liquidity directly to banks so that they can loan money to the private sector. The effect of the federal funds rate on bank liquidity is well known – however, the effect outside the banking system is not. Many blame the Fed for asset bubbles caused by their manipulation of the rate.

The US dollar is the major international trading currency and the funds to “stimulate” flow to the points where the most money can be made – and much of this flow went outside the USA.  Economic theory on monetary policy has yet to come to grips with a currency that has no borders.

Recently, the threat of raising interest rates has caused the dollar to strengthen as dollars used in “carry trade” flow back causing the dollar to strengthen (there are other reasons also for dollar strengthening).  This is detrimental to USA exports. Similarly, there are other reasons USA exports have declined. This is the problem with monetary policy – multiple dynamics are in play – and it seems all the good caused by zero bound federal funds rates have been met by opposing dynamics (and much of these opposing dynamics were caused by the zero bound federal funds rate itself). No good deed goes unpunished in a feedback spiral.

I ponder what are normal interest rates for the federal funds – the correct interest rate if the market determined what the rate should be.  Here Chair Yellen provided her opinion. 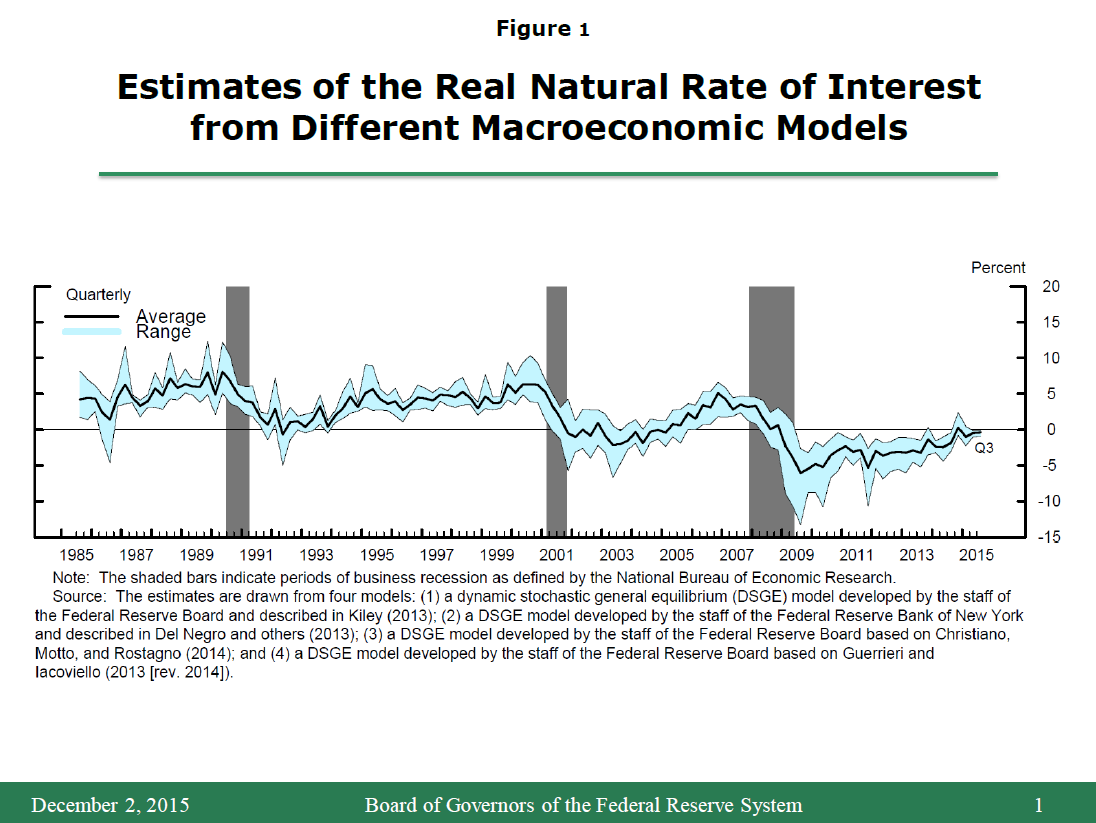 Empirical support for the judgment that the neutral federal funds rate is low comes from both academic research and Federal Reserve staff analysis. Figure 1 employs four macroeconomic models used by Federal Reserve staff to estimate the “natural” real rate of interest, a concept closely related to the neutral rate. The measures of the natural rate shown in this figure represent the real short-term interest rate that would prevail in the absence of frictions that slow the adjustment of wages and prices to changes in the economy; under a variety of assumptions, this interest rate has been shown to promote full employment. The shaded blue band represents the range of the estimates of the natural real rate at each point in time. This analysis suggests that the natural real rate fell sharply with the onset of the crisis and has recovered only partially. These findings are broadly consistent with those reported in a paper by Thomas Laubach and John Williams, shown in figure 2. 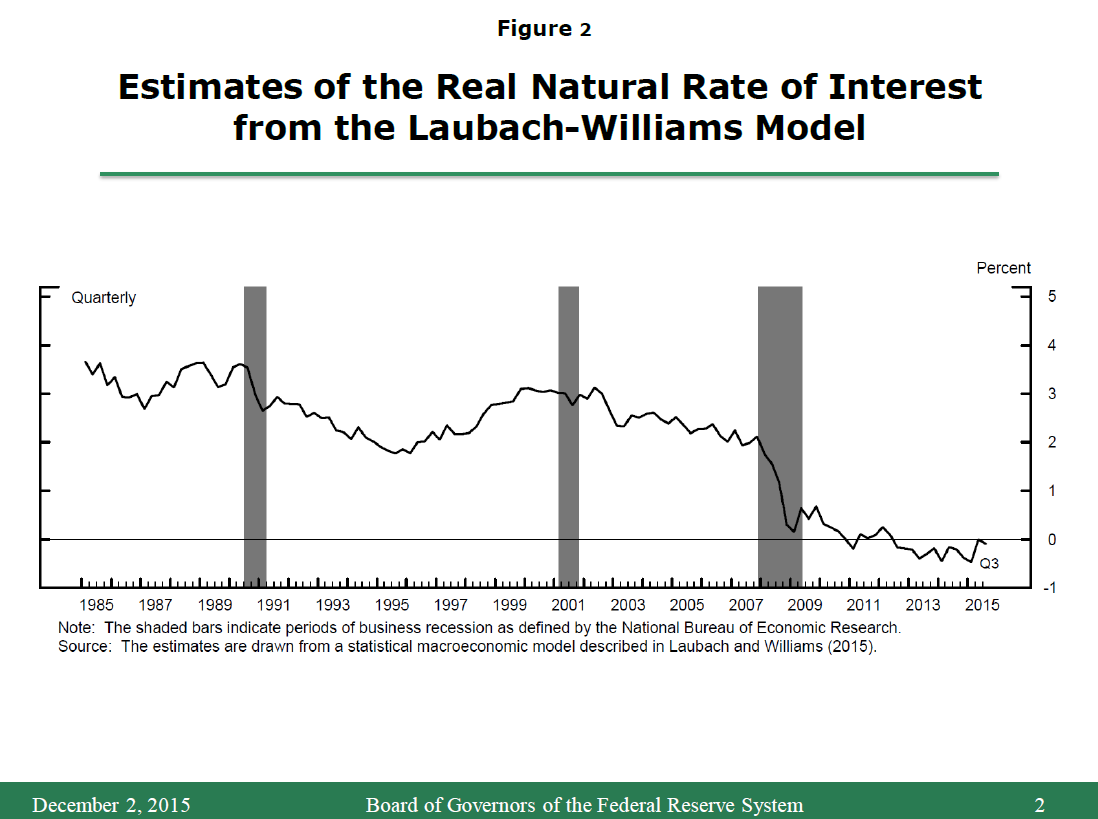 Honestly, these charts on the natural rate of interest do not convince me the time is right to normalize. Figure 1 is in an uptrend and indicates the funds rate is currently correct. But Figure 2 is far from convincing as it shows a flat trendline. Still, Chair Yellen told Congress that the Fed cannot wait to “normalize”:

However, we must also take into account the well-documented lags in the effects of monetary policy. Were the FOMC to delay the start of policy normalization for too long, we would likely end up having to tighten policy relatively abruptly to keep the economy from significantly overshooting both of our goals. Such an abrupt tightening would risk disrupting financial markets and perhaps even inadvertently push the economy into recession. Moreover, holding the federal funds rate at its current level for too long could also encourage excessive risk-taking and thus undermine financial stability.

In the last year, the Federal Reserve Regional Governors had been dysfunctional in talking around this subject – but it is now appearing that there is a general consensus for a December rate increase. I have been on record that the rate normalization should have began a long time ago (I believe the zero bound policy was causing significant headwinds to the USA economy).

A strange economic situation has been occurring in 2015 with a deceleration in the rates of growth in literally every corner of the USA economy – employment, construction, transportation, credit growth, consumer sentiment, consumer spending, business income. Although no recession warning flags are present, one can easily argue that the economy is not well currently, and it’s looking like things will get worse before they begin to improve.

But, on the other hand, would a small upward adjustment in the federal funds rate have any perceptible economic effect? – not likely.  But what cannot be calculated is irrational behavior by business, consumers and investors.  The world I see is irrational, and runs on baseless opinion.

The Paris Climate Agreement At A Glance: Infographic Bonus

COP21: Thanks To Our Sponsors, The Climate Debate Is Open For Business

COP21: Thanks To Our Sponsors, The Climate Debate Is Open For Business