The Economy Will Fluctuate

Lest we get too bearish on the US economy in the short run, it pays to remember that even though the Fed has outlawed the business cycle, “the economy will fluctuate.” Contrary to the wisdom of JP Morgan, the stock market may not fluctuate, but the economy will.

Unlike the good old days when economic cycles typically ran roughly 4 years between recessions and grew at an average of 5% over time, today it doesn’t work that way. Today, the economy fluctuates over 3-4 months, almost imperceptibly, and economic growth averages 1.5% or 2%, depending on the time of the month. In the second quarter, GDP growth was reportedly +1.2%, which real time tax collection data had clearly foreshadowed.

We were reminded of the 3-4 month cycle in July when Federal Withholding Tax receipts rebounded sharply after the persistent weakness of the second quarter. These fluctuations aren’t seasonal because sometimes the cycle lasts 3 months, sometimes 4 or 5 months. They don’t occur at the same time every year. But like all things, the economy does still have these small, mysterious cycles. Breathe in, breathe out. Or something.

The second quarter weakness made it appear that the US was sinking into recession. At least that’s what I thought at the end of June, but I warned that an upturn in this short term cycle was due, and sure enough it came pretty much on schedule.

Many bearish observers focus on the lagging data from the second quarter which showed slowing and extrapolate that forward. As a long term bear on the state of the US middle class, and a harsh critic of central bank market manipulation and the disastrous economic trends that are a result of that, I fully commiserate. Central bank policy has punished savers and rewarded speculators. It has encouraged corporate chieftains to engage in financial engineering schemes that hollow out their companies while enriching themselves and their top lieutenants. Fed policy has enabled them to persistently cheat workers out of a fair share of the US economic pie.

So for most Americans incomes stagnate or fall. The bulk of the new jobs that the economy generates are low paid service jobs. For more intellectually demanding, higher pay jobs, corporate bosses import cheaper talent from China and India. Then the bosses require their US employees to train the new hires, only to then be forced to turn over their jobs to the lower paid newcomers. In this survival of the fittest and cheapest environment, only the smartest survive and prosper. The rest get leftovers or nothing at all. When fewer people get the rewards of hard work and thrift, the foundations of the economy eventually crumble.

It’s insidious and slow moving, but over the long haul the trend is clear. More Americans are doing worse under policies which promote speculation and debt over savings and real investment. The trend of serial central bank policy blunders that I have talked about for the past 14 years continues to hollow out the US economy. Ultimately that will lead to cataclysm if the trend is not at least halted, if not reversed. Neither of those seems likely for the foreseeable future. The Fed is terrified of raising interest rates even a quarter of a point. A fair and reasonable return on the savings that come from hard work and thrift are not on the horizon.

While the long term trend is a growing disaster, the short run economic counter trend bounces matter because the Fed bases its policy decisions on whatever’s happenin’ now, baby. If we get a handle on the current reality ahead of everybody else, then as traders we have a leg up on what the Fed is likely to do next, like the long expected phony interest rate rise that the Fed keeps postponing.

Just as the withholding data showed an uptick in July, a subgroup of the July industrial production data released this week also rose markedly. The overall data was punk, but this critical industry surged, and it wasn’t all because of the weather.

The industrial production index for electric power generation and distribution is a decent proxy for the US economy as a whole. While industrial production does not directly measure services output, electricity serves everything that the US economy generates. All businesses, whether industrial, commercial, or services use electricity. All households use electricity. When electricity generation surges there can only two reasons for it. It’s either the weather or a change in business conditions. If July was brutally hot, then people will use more electricity to run their air conditioners. If July weather is more or less normal, then if there’s an increase in electricity distribution, it would probably be due to an increase in business activity.

Electricity generation and distribution in the months of May, June and July had been flat from 2006 to 2015. Some of that was due to increased energy efficiency. Some was because the economy remained weak, with activity shifting from high value, energy intensive uses, to low value uses which use less electricity. That flat performance continued in May and June of this year, but July 2016 electricity use surged to a new high. Something changed in July. 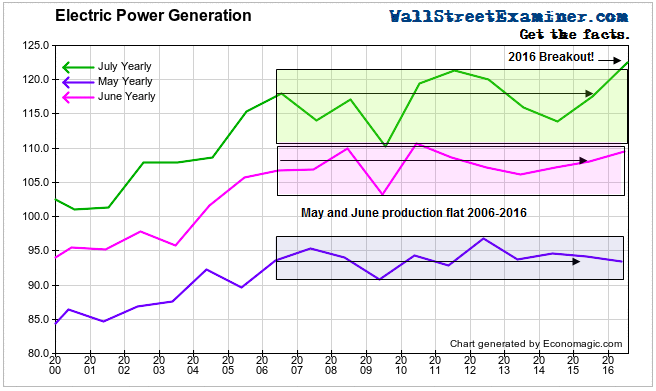 But was it just the weather? We know that July was really hot in most of the US. NASA data shows that the average temperature in July was 75.25 degrees F. That was 1.33 degrees hotter than July 2015. So at least some of the increase in electricity usage was because it was hotter. But July 2012 was significantly warmer than July of this year, at an average temperature of 76.77 degrees. July 2011 was also hotter than this year. 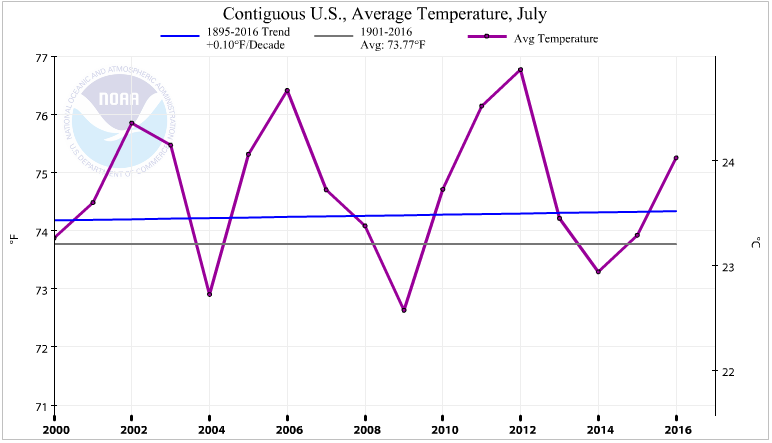 If the increase in July electricity use was exclusively due to this year’s hot weather, then it would still be less than usage in July 2012 and 2011. But current usage was higher than both of those years. That suggests that a portion of the increased usage was due to increased business activity. Usage in May and June was still rangebound below the peak levels. The fact that July usage broke out to a new high and temperatures didn’t, suggests that US business grew in July. That tends to corroborate the implications of the strong uptick in withholding tax collections that month.

Assuming that this trend continues through August, 2 months of strengthening economic data such as the July jobs data, should be enough to finally get the Fed to move off the dime at its next meeting on September 20-21.

UK Video Games Industry Levels Are Up In 2016

Rickards: Brexit Is NOT The End Of The EU

Rickards: Brexit Is NOT The End Of The EU