The Capital Controversies Rise Once More

Fixing the Economists Article of the Week

In recent days the old capital controversies have come up again. This has been in response to the work of Thomas Piketty and its championing by the likes of Paul Krugman. Because this work deals with the issue of inequality it is natural that the capital debates should come up once more.

The capital debates were, it should be said, about rather a lot of things. But the most immediate concern was with income distribution. The mainstream marginalist argument tried to show that income is passed over to the factors of production — that is, capital and labour — in line with their marginal productivities. This implies that under free-market conditions the income received by each factor is in line with what it should be for maximum efficiency. There is an implicit notion here that income distribution is thus fair.

Of course, marginalists do not (always) take this argument literally. There are plenty of ways of protesting against the levels of income distribution from within this framework. The most obvious that comes to mind — and that which was put forward by a key player in the debates Robert Solow — is that income inequality can arise due to past levels of income inequality.

That is all well and good but the theory still gets away from an obvious truth: a key component of income distribution is due to the relative power of labour and capital. Anyone who denies this basic fact is either blind, politically motivated or… a marginalist economist. But the facts simply do not lie as can be seen in the graph below. 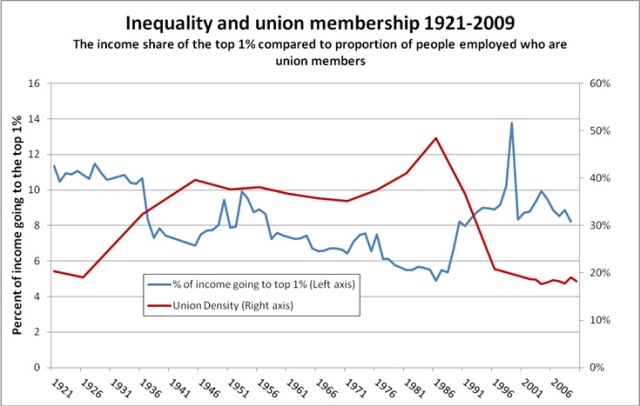 To my mind it is extremely important that the economics open itself up to the idea that the distribution of the social product is due, to a very large extent, to class power. Every other social science remains open to this idea. It is only mainstream economics that remains blind to this.

Often, however, the focus of the capital debates is on the so-called ‘reswitching problem’. I’m not going to go into detail about this as Matias Vernengo has done a good post on it and the Wikipedia page on the topic is also very good. Ultimately, however, I think that this is far from being of primary importance. The primary criticism of the mainstream theory should be one of simple realism: it is blindingly obvious that the social product is distributed based on class power (with finance becoming an increasingly important redistributive mechanism in recent years). This is basically the line that Kaldor took in the 1960s and then (rightly, to a large extent) dismissed the ensuing debate as largely a waste of time.

The second most important criticism, however, is also worth noting: namely, that the mainstream theory is based on a very sloppy methodology. Joan Robinson pointed this out clearly in her 1953 paper The Production Function and the Theory of Capital and when the dust settled on the Capital Debates she continued to insist that this was the primary theoretical criticism of the marginalist theory. Back in 1953 she wrote,

All these puzzles arise because there is a gap in time between investing money capital and receiving money profits, and in that gap events may occur which alter the value of money.

To abstract from uncertainty means to postulate that no such events occur, so that the ex ante expectations which govern the actions of the man of deeds are never out of gear with the ex post experience which governs the pronouncements of the man of words, and to say that equilibrium obtains is to say that no such events have occurred for some time, or are thought liable to occur in the future.

The ambiguity of the conception of a quantity of capital is connected with a profound methodological error, which makes the major part of neo-classical doctrine spurious.

The neo-classical economist thinks of a position of equilibrium as a position towards which an economy is tending to move as time goes by. But it is impossible for a system to get into a position of equilibrium, for the very nature of equilibrium is that the system is already in it, and has been in it for a certain length of past time. Time is unlike space in two very striking respects. In space, bodies moving from A to B may pass bodies moving from B to A, but in time the strictest possible rule of one-way traffic is always in force. And in space the distance from A to B is of the same order of magnitude (whatever allowance you like to make for the Trade Winds) as the distance from B to A ; but in time the distance from to-day to to-morrow is twenty-four hours, while the distance from to-day to yesterday is infinite, as the poets have often remarked. Therefore a space metaphor applied to time is a very tricky knife to handle, and the concept of equilibrium often cuts the arm that wields it. (pp84-85)

This, I think, is a profound criticism. It is one, of course, that makes economists — even heterodox economists — somewhat itchy because of it is methodological nature. But it is far more important than the reswitching result or anything of that sort.

The fact of the matter is that investment in plant and equipment is made, as Keynes long ago noted, in the face of substantial uncertainty. What this means in practice is that to talk about how different wage rates and so forth will affect investment under full employment conditions is far too fanciful to have any real world relevance. When we undertake such discussions we are literally talking about an imaginary model that has no relevance to the real world — absolutely none, zero, zilch. It has no practical use at all and should only be seen as an intellectual game.

In order to understand capital accumulation we have to look at a number of purely empirical issues. The work of Mariana Mazzucato and her Schumpeterian colleagues is interesting in this respect. We might also be able to posit some stylised facts that provide good guides to policy analysis — the Kaldor-Verdoon law is a useful example in this respect. But we really cannot go much further.

Economists will not like this, of course. But one must wonder why. Why is it that economists are so attracted to silly models of economic growth in the first place? Some models are didactically useful, but when they manifestly cease to be — as are overarching theories of production and distribution — why do some people continue to insist on holding them tight? In practice they are not used for any practical purposes — and no, regressing production functions is not a practical activity. Besides, McCombie and Felipe have showed clearly that what is taking place in such regressions is that an underlying accounting identity is providing for the goodness of the fit.

Economists need to stop telling themselves these silly little stories and chasing chimeras. If they are interested in what accounts for investment, technical change and capital accumulation then they should go and study it. Not through their silly little models. But by examining the facts and studying companies as institutions. Do surveys. Look for empirical correlations. Engage in some corporate anthropology. Just stop building stupid models.

Nearly A Quarter Of Urban Americans Are Unconnected