The remodeling of existing homes is an indicator of economic health whose importance is on par with new home construction. The size of the remodeling market is about $300 billion a year, not far from the $340 billion value of residential construction put in place last year.1 Unlike new construction, which captures the outlook of homebuilders, remodeling more directly captures consumer confidence. Moreover, new construction paints a picture of the economy that is skewed towards conditions in high-growth metropolitan areas – and on their outermost fringe at that – whereas remodeling reflects the state of the economy across a more evenly distributed geography, which better represents the nation as a whole. 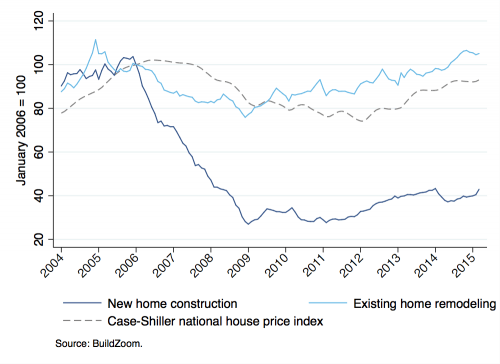 The table and graph above present the BuildZoom & Urban Economics Lab indices for construction of new homes and for remodeling of existing ones, and sets them against the Case-Shiller national housing price index.

Remodeling follows a similar pattern to new construction, but is far less volatile

The remodeling of existing homes, on the other hand, is not as volatile. This is consistent with the fact that it involves the replacement or repair of items far less durable than the home as a whole. Moreover, remodeling includes home improvement, but it also includes maintenance and repair, which are difficult to defer when the need arises and therefore contribute to lower volatility as well.

The following tables and graphs present seasonally-adjusted indices of an initial selection of metropolitan areas. 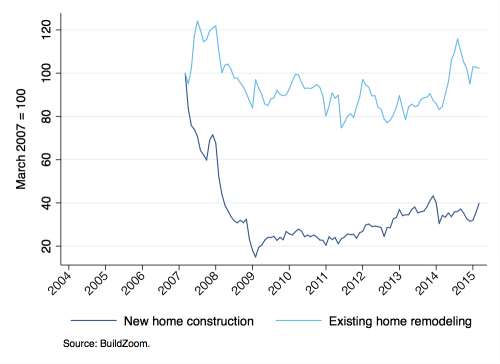 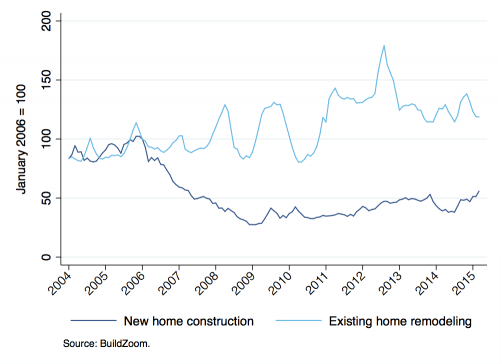 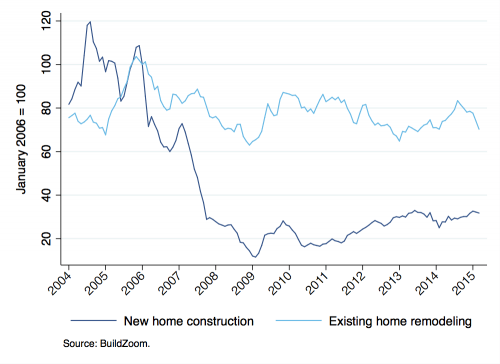 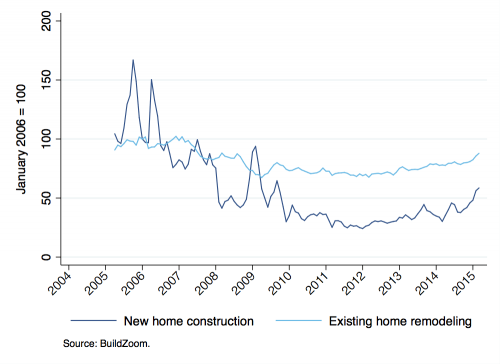 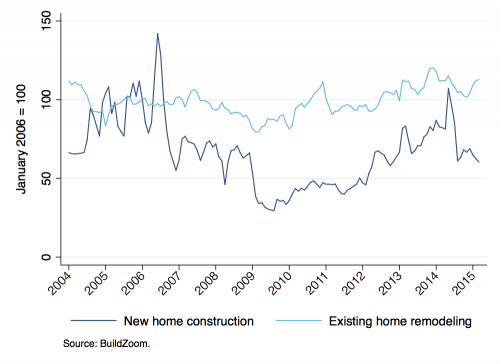 The single most pervasive feature of the metro area graphs is that new home construction consistently fell more than remodeling in all of the reported metros, however the metro areas differ in the extent to which permitting activity has recovered.

At the other extreme, remodeling in the Phoenix metro area is essentially the same as it was in 2009, and in the Dallas metro area it has actually been rising throughout the entire period since 2005. How is this possible? Both of these metro areas are relatively free of geographic and regulatory constraints on growth, which keeps their home values relatively low compared to other parts of the country. In such areas, gains in home equity are less important as a source of funding for remodeling. Further, because home values in these metros hover near or below the replacement cost, it is likelier there than elsewhere for it to be more cost-effective to move into a home with wanted features than to create them in-place by remodeling. In other words, homeowners in Dallas and Phoenix often face a better bargain listing their homes than loving them, and as a result fluctuations in remodeling activity are relatively independent of home values.

The BuildZoom & Urban Economics Lab index leverages BuildZoom’s repository of building permit data using a simple additive chaining method, developed and assessed in collaboration with Professor Albert Saiz (MIT). The performance of the method was assessed using a Monte Carlo simulation study, and a comprehensive account of the method and its assessment is available in a supporting technical document.

The national BuildZoom & Urban Economics Lab index of permitting for new homes is highly consistent with the corresponding numbers of permitted new homes published by the Census Bureau.2 The following graph compares the two (before adjusting for seasonality). 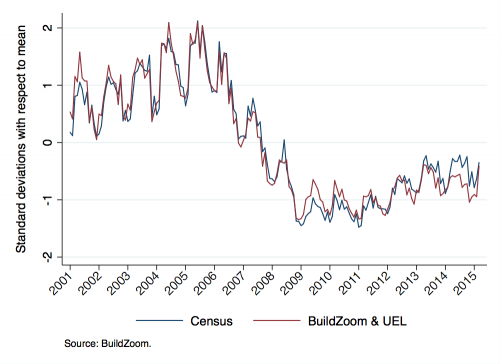 The BuildZoom & Urban Economics Lab index complements residential building permit statistics published by the Census Bureau. The Census’ Building Permits Survey considers only new homes, not existing homes. In addition, whereas the Census figures are obtained from a regular questionnaire asking local governments how many building permits were issued (Form C-404), the BuildZoom & Urban Economics Lab index is compiled from the ground up, based on individual building permit records.

BuildZoom and its partners at MIT are firmly committed to transparency of data and methods. The building permit data repository can be browsed online for free, the indices and their components are available for download, and the method used to generate the index is explained in detail in a supporting technical document. Neither the data nor the methods are perfect, and we openly invite users to inspect the resources provided and alert us to what they find.

Hot Takes: The Top Climate Change Reporting of the Past Year