Stratfor: Tartus, the Mother of Martyrs

Tartus is Syria’s second largest port city, overshadowed only by Latakia. Located on the country’s coastal plain, both sit within the Alawite minority’s geographic core. Originally known as the “Nusayris,” the Alawites became established along the Mediterranean coast under the Shiite Hamdanid dynasty. With the fall of this dynasty, however, they became an embattled minority, persecuted by Christian crusaders, the Sunni Mamluk Sultanate and the Ottoman Empire in turn.

The French colonial regime favored the Alawites in order to balance power against the majority Sunnis and their Ottoman backers. Following independence, this privileged position made the Alawites a target of reprisals from the new government. By the 1960s, however, the Alawites had regained influence because of their presence in the military and their support for the Baathist movement. In 1971, after a tumultuous period of coups and counter-coups, Defense Minister Hafez al Assad gained control of the government. The Alawite general remained in power until 2000 and was succeeded by his son, Bashar al Assad.

Today, the city of Tartus is gloomy. Syria is four years into a vicious civil war. Bashar al Assad’s government has managed to survive but is locked in an existential battle with a host of rebel forces, including the Islamic State. Again and again the government has been forced to retrench to protect its core around the Alawite coast and the capital of Damascus. The heady period of unchallenged Alawite ascendance has come to a murky end. 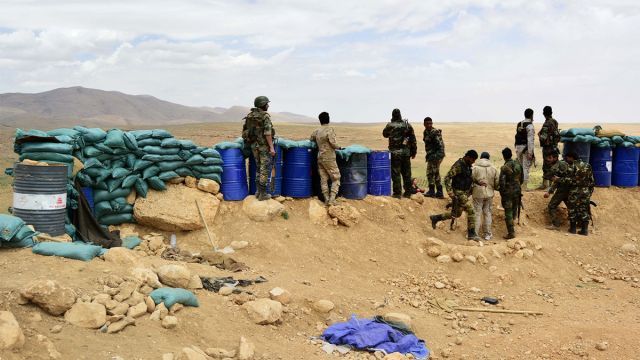 Syrian loyalist forces stand on a hilltop May 9 near the regime-controlled village of Assal al-Ward. (STR/AFP/Getty Images)

After four years of disastrous conflict, the Alawites of Tartus are frustrated and suffering from staggering human losses. More than 70,000 young Alawite soldiers have been killed and 120,000 others wounded. Another 10,000 are unaccounted for. These figures do not even include Tartus’ non-Alawite loyalist troops. Tartus is now known as the “mother of martyrs.” One-third of all loyalist casualties come from the city, where posters of fallen soldiers are everywhere.

Within the city, there is a growing perception that President Bashar al Assad is intent on staying in power no matter how many Alawite deaths it takes. The Alawaites, who in 2011 trumpeted their support for al Assad, now threaten him with a different chant altogether: “God willing, we will witness the funeral of your sons,” they say.

The Alawites also feel abandoned by other minority groups who do not seem willing to send their young men to fight and die. This is important — throughout Syria’s history, minority groups have contended with the majority Sunni population, which makes up around three-fourths of the population. Again and again in battles against the rebels, the Druze, Christians, Ismailis and Shiites of Syria’s National Defense Militias have fled. The Alawite regulars feel like they are fighting and dying alone.

In Tartus, funerals for the succession of fallen soldiers have turned into processions of rage. Tartus receives at least 20 dead bodies each day. During times of more intense fighting, this number often rises to over 80. The regime, fearing that each of these deaths could cause massive uproar, does not allow hospitals to release more than five of the corpses to families each day. The process is painfully slow: Only after one family has received the remains of their relative and left the hospital can the next family enter. Families often wait 10 days to retrieve a body.

In the midst of such bloodshed, many Alawites have come to the conclusion that the regime cannot win the war. One person told me, “Our regime has failed. Its erratic policies made it possible for the Islamic State to emerge.” The turning point for them was the regime’s September 2014 defeat at Tabqa air base, where Islamic State militants slaughtered hundreds of Alawite soldiers. The regime failed to rescue them. Families no longer want their young men to take part in what they see as a suicidal war. Young men flee to the mountains or to Lebanon to avoid conscription. If they can, they flee by sea to the Turkish city of Mersin, then try to enter the European Union illegally. The regime is trying to replace its lost soldiers by forcibly recruiting young men who are supposed to have exemption or deferment from military service.

Although the people of Tartus continue to suffer and their sons continue to die, it is only at the end of the war, whatever its outcome, that the city’s Alawites will really comprehend the full extent of the catastrophe. For now, the situation is precarious. The Syrian opposition has thus far failed to address the status that the Alawite community would hold in a post-al Assad Syria. Even if this were clearly worked out, the Alawites cannot simply join the rebel Free Syrian Army — the Sunnis do not trust them. And if Alawites quit fighting for al Assad, the administration would surely crack down on them. A threat from within his core territory is not something al Assad can afford at the moment.

For the people of Tartus today, few options remain besides simply carrying on as before. But every day, more bodies come in; every day they must deal with the reality of their fragile position.

Editor’s Note: This first-hand account was written by a Stratfor correspondent in the Middle East.

“Tartus, the Mother of Martyrs is republished with permission of Stratfor.”

Import and Export Price Year-over-Year Deflation Continues in May 2015. However Deflation Was Less Than Last Month.

Import and Export Price Year-over-Year Deflation Continues in May 2015. However Deflation Was Less Than Last Month.