GDP Data and the CBO Outlook

The output gap remains large, even as the external sector supports growth; this outcome is partly due to excessively rapid fiscal consolidation

Economic Slack, Now and Next Year

The CBO released Budget and Economic Outlook on Tuesday 04 February 2014. As part of the report, the CBO released its estimates of potential GDP in a manner consistent with the new GDP measures that incorporate intellectual property in the investment data. The output gap remains large and negative, using these updated estimates. 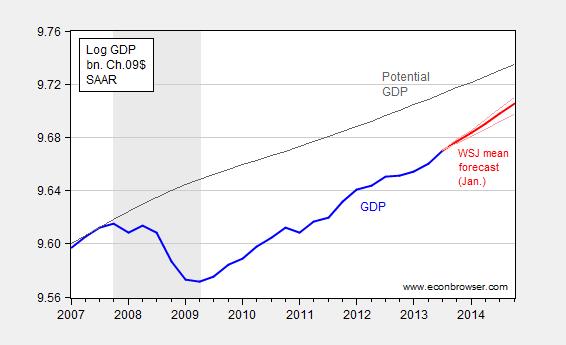 Part of the reason the progress in shrinking the output gap slowed in 2013 can be directly attributable to fiscal drag — in other words the prediction that the sequester would slow growth was realized. [1] (When the sequester deal was nearly finalized in April February, Macroeconomic Advisers forecasted 2.6% growth for 2013 , with an sequester plus Fed offset scenario growth of 2.1%; q4/q4 growth turned out to be … 2.7%. [2])[Edits 2/7 8:25AM – MDC] Consider the shrinkage in the cyclically adjusted budget balance (expressed as a share of potential GDP). The adjusted deficit shrank substantially in Fiscal Year 2013. 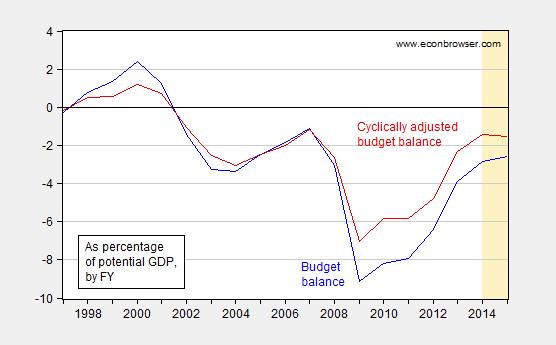 It’s perhaps easier to see the extent of fiscal consolidation by examining the change in the cyclically adjusted budget balance, as displayed in Figure 3. 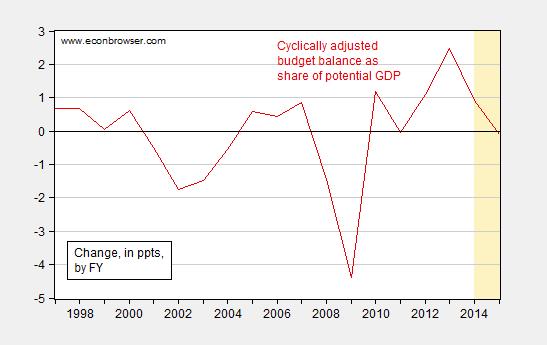 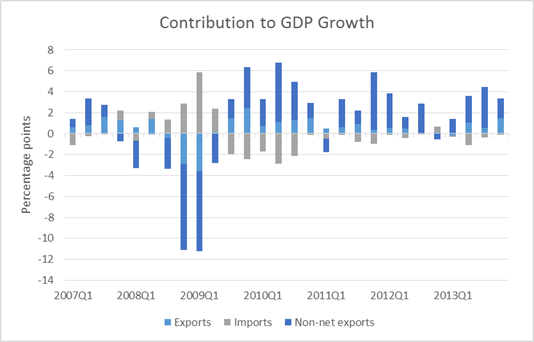 The advance estimate relies upon forecasts of certain components, including December exports and imports (which will be released Thursday morning). One question is whether support from net exports will continue into the future. 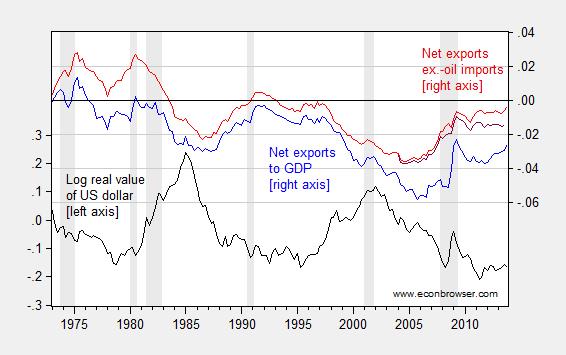 In other words, there has been substantial improvement in the trade balance. Exports in particular have surged in the past couple quarters, despite the relative stability of the US dollar, in inflation adjusted terms. 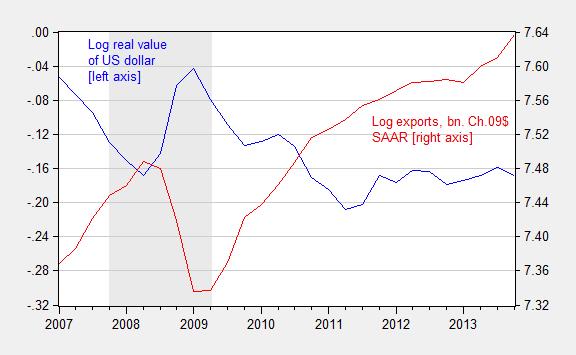 It remains to be seen whether export growth will continue at this pace given the turmoil in emerging markets and the tentative nature of the recovery in Europe. In particular, depreciating emerging market currencies [5] could result in a stronger dollar — the daily nominal index has recently exceeded levels in early July and in August. For its part, CBO projects a relatively stable dollar in 2014, while Deutsche Bank forecasts a twelve-month 8% appreciation (from 12/18).

Update, noon 2/6: December trade figures released today indicated a $38.7 billion trade deficit, slightly larger than the Bloomberg consensus of $36 billion. Jim Dorsey at IHS-Global Insight as well as Macroeconomic Advisers estimate that 2013Q4 growth will be 0.4 ppts lower (q/q SAAR) as a consequence of these figures.

Nominal exports are shown in Figure 7 below. 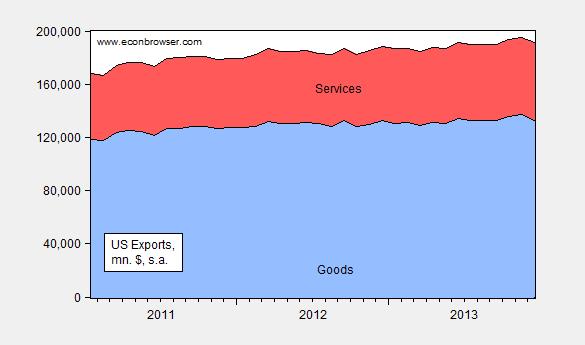 Infographic of the Day: How Pinterest Drives Ecommerce Sales

Infographic of the Day: How Pinterest Drives Ecommerce Sales