About a year ago Gordon, a Northwestern economist, started compiling updated research frameworked around Solow’s seminal 1950s contribution on long-term economic growth. Here are two sample charts that complement one another and reveal the context of an important story: 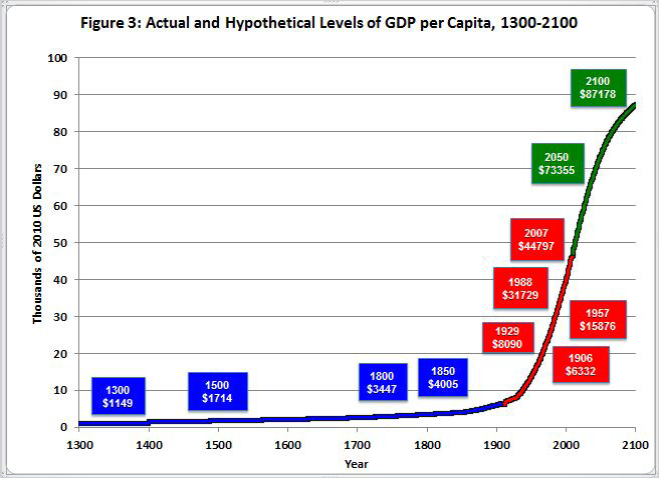 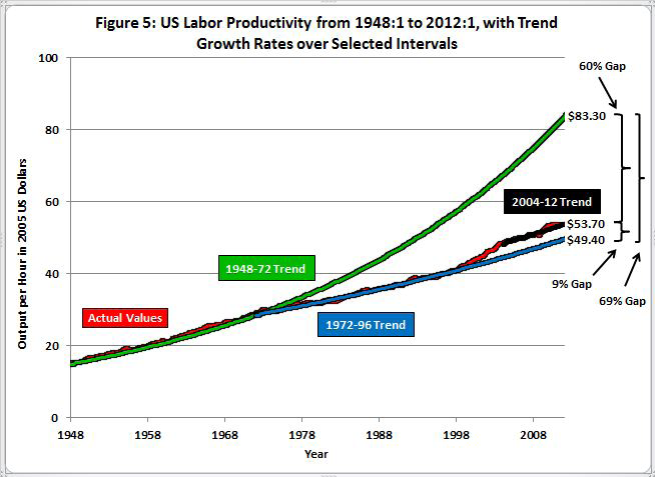 These unretouched, source illustrations show econometric forecasting both before and after the actual measurement data in<strong >red. The later half of this <strong >red data (using either chart above) and their highly-uncertain, econometric extrapolations (in <strong >black and blue of the second chart above) both reveal a worrying trend.

Interestingly, what we discuss here is only related to the growth rates across time, and not the frequency of the economic cycles. This latter mathematical topic has generally been stable going back about 1.5 centuries (so just part-way into the later part of the <strong >blue line on the first chart above). See this note for economic cycle frequencies.

The research here reconciles to our intuitive understanding of why there has been some reduction in volatility risk, particularly in the decades immediately post the Great Depression. In a small way, similar patterns are evidenced now, post the 2008-2009 global financial crisis also known as the “Great Recession”. These broader economic rationale show that this pattern is not simply an exercise of random stochastics playing out in some haphazard way.

In order to understand these economic and risk patterns better, we need to appreciate the lengthy time frame for significant innovations to play out. So our story here stretches back to the late-19th century. This is when one of the greatest industrial revolutions took place. And as suggested earlier, they were still being implemented and effecting productivity for decades even after the Great Depression and the flanking World Wars. These changes include electricity, internal combination engine, running water, indoor toilets, communications, entertainment, chemicals, and petroleum.

Equally important, the economy was able to multiply these benefits with a large global population enjoying a rising growth rate. Now visually taking the second derivative (e.g., looking at higher-order rates of change to compute acceleration or deceleration) of the first chart above, one would see that the annual change in per capita growth (through the mid-20th century) was better than 2.5%. Over the past several decades however (within the<strong >bluedata in the second chart above) this has slowed to less than 1.5%; a difference of about 1.2%. It’s also important to note that this has therefore been the only experience for those born in the younger half of Generation X, and later.

The just more than 1% difference is also an economic and actuarial difference that takes into account the crosscurrent impacts from slowing population growth, increased longevity, and a society whose seen slowing productivity growth. The gap also reconciles against the second chart above.

Taking the central value from the <strong >red and <strong >black trends, and one has the output gap of ~60%. The economic math is easy: ~1.2% annual output gap compounded over a ~35 year regression timeframe differences. And this combination helps explain most of the ~60% output gap. The statistics derivation to net estimate the ~35 years comes from (colored to match the second illustration above):

Looking at the economy and markets from the recent recovery, through 2013, it’s easy to say that issues going forward from this last crisis will quickly dissipate. That we would just enter into our “new normal regime” of low volatility growth that we had for much of the time in-between the Great Depression and the Great Recession. But what complicates this analysis is the often less-discussed global population growth having peaked in the 1960s and has now come down to just equal the replacement ratio. This fact should be an important component for some developed country’s immigration reform debate.

Also the last industrial revolution that we had (e.g., computers, internet, mobile phones) just wasn’t as strong as what we had enjoyed from the industrial revolution described in the preceding paragraphs. The innovations of which helped fuel global transportation and commerce. There is now also a continued educational gap between those capable of enjoying the benefits from these new, high-momentum companies of late, and those in a position to create these innovations. One may not think about this looking at market values of companies such as facebook (which is in the same magnitude as technology behemoth Intel which has yet to surpass it’s Internet-bubble price, and twice that of the industrial conglomerate Honeywell) even though it is exceptionally unclear to most people how on Earth does this company creates a massive boost to net productivity. Quick question: last week did you check facebook updates multiple times during work? Most who answered yes to this would have a difficult time explaining how this facebook usage actually enhanced (as opposed to detracted from) their workplace productivity.

All combined, we also see lessons in how much elasticity there is in post-retirement age productivity from the current cohort of Baby Boomers, who have already started to approach that age. This is a large economic group that now carries a bit of a standstill weight in some developed countries, versus the broader economic pattern of we have seen from them in the mid-20th century blip (within the multi-century history of human progress).

One of the reasons the central banks globally are in aggregate still concerned about overall growth and inequality (also note we only discuss averages here and not the extra differentiation if instead tracking the median person) is that the current recovery is just a paragraph, in the broader chapter of slower economic growth per capita from the most recent decades. A case in point is that we have not seen one of the FOMC’s, “upper end” real growth forecast for 2014, 2015, or beyond, at or above above 4% (see Table 1 here), a level we last reached over several quarters in late 2003 and 1999. Meanwhile per the BEA this was far more predominate as recently as during the 1970s and earlier.

So now we have a compelling amount of economic rationale here to help explain these differences in cyclical output and why the upward arc is no longer as convex. And we don’t have to myopically consider leaving it to simply the random nature of the econometric time series.

On a final and unrelated note, recent popular research here has been much viewed in The New York Times. The investment probability analysis was interesting and thought-provoking for many different communities, while simultaneously offering some tough implications for the many who greatly overestimate their underlying abilities relative to others. Summaries of the research were republished in many dozen news companies spread around the globe and were commented on numerously in different television news. Also in lieu of TV invites, I opted instead for one nice radio appearance with Betty Liu of Bloomberg. Please check out the instructions from this link. Finally, upcoming research will be on exciting and novel mathematical constructs for looking at additional risk, within a uniform liquidation. Given the theoretical nature of the piece, there will be a small lapse in time before this and other tools are shown here.