Money and Banking, Part 18 (B): Overview of the Financial System: A World of Promises

Due to the size of this post, it has been split into 2. You can find part A here. 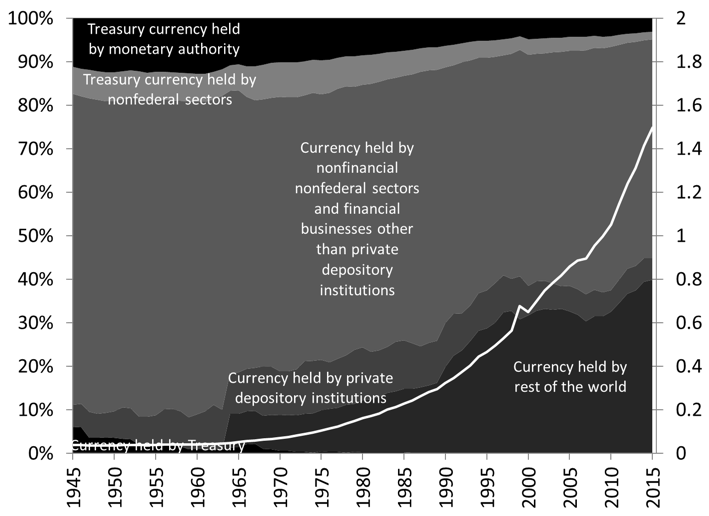 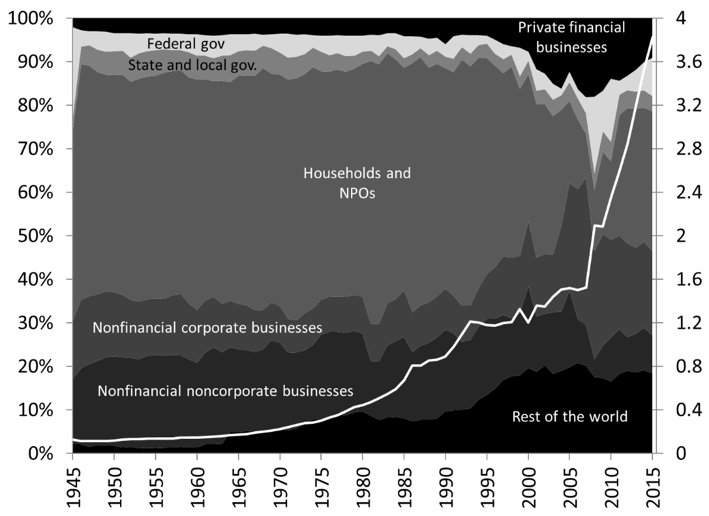 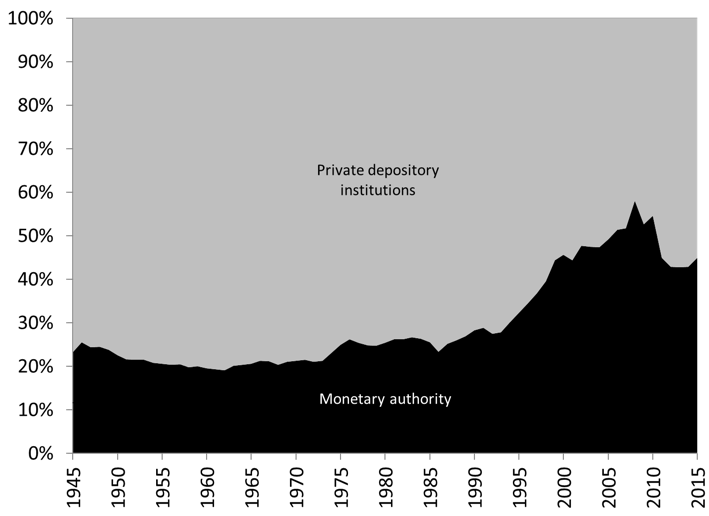 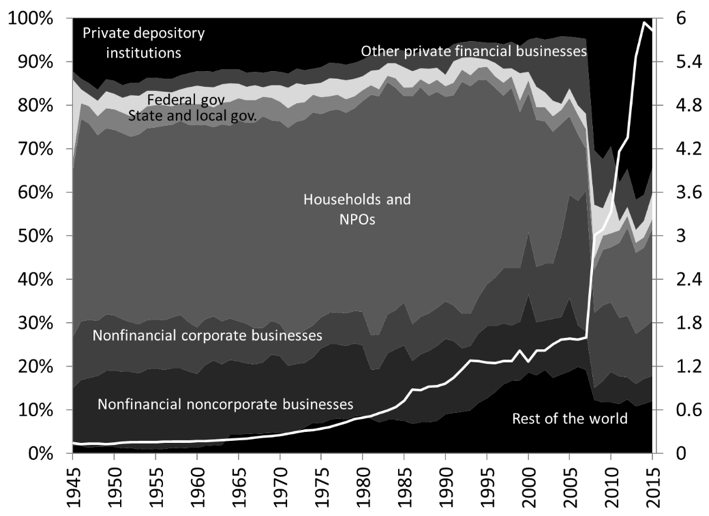 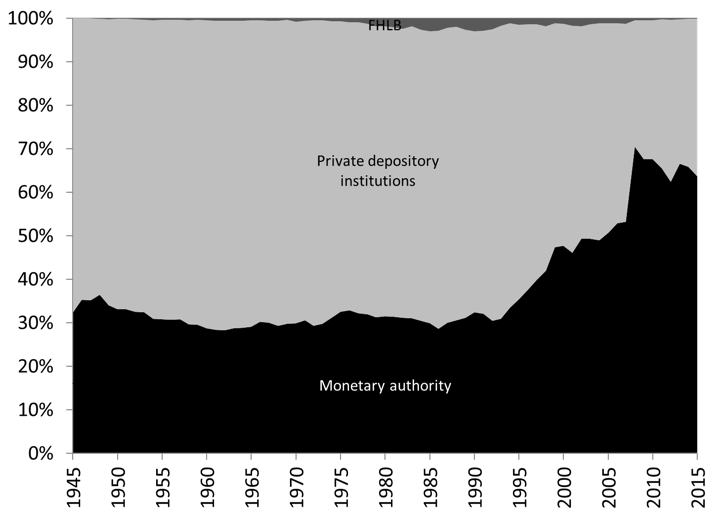 While many promissory notes can be traded among bearers, there is also a large number of promissory notes that do not have an active market in which they can be traded. Once a bearer has decided to acquire that type of promissory it is difficult, if not impossible, for him to part with it and the bearer must wait for the promissory note to mature, or a willing issuer to repurchase it before maturity. A later post will explain how banks and other financial-market participants have gone around this constraint by securitizing non-marketable claims.

Maybe the most well-known non-marketable financial instrument, especially after the 2008 financial crisis, are mortgages. Mortgages are medium- to long-term promissory notes that are secured by residential or commercial real estate (home, apartment building, store, among others). The issuer promises to pay on a monthly basis some interest income and to repay the principal owed by the time of maturity. If the mortgagee (the issuer of the mortgage like a household who buys a house) defaults, the mortgagor (the bearer of the mortgage, a bank who funded the household) can foreclose on the property, that is, the mortgagor can take ownership of the property, evict the current resident, and sell the property to try to recover any unpaid interest income, fees and principal owed. Figure 18.25 shows that the percentage of outstanding home mortgages in foreclosure quadrupled in the late 2000s with 4.5 percent of outstanding home mortgages in the process of foreclosure compared to around 1 percent for 20 years prior to the Great Recession. Millions of households lost their home and had to find alternative housing methods. Although home foreclosures are back down today, evictions are not because renters are now facing threats of eviction following a rapid increase in rents after the financial crisis. 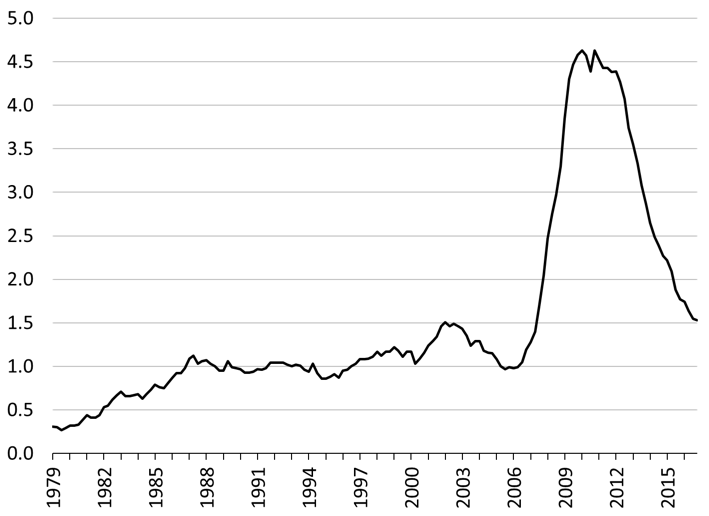 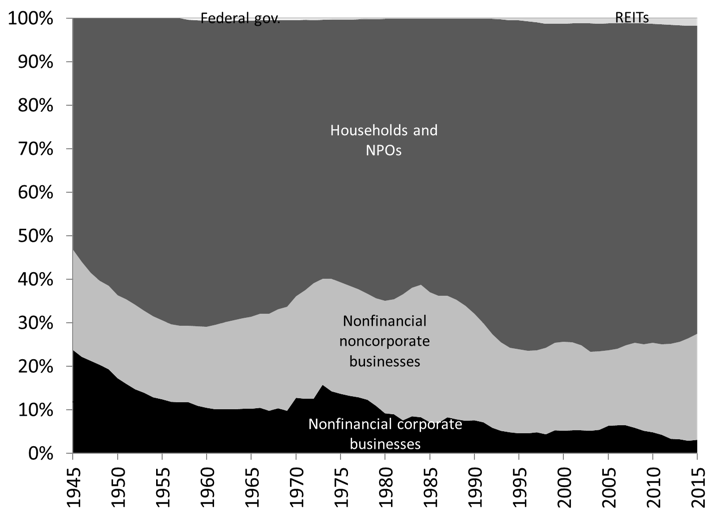 Figure 18.26 Structure of issuers of mortgages, percent.
Source: Board of Governors of the Federal Reserve System (series Z1, L.217)
Note: The federal government, via the Department of Defense, issued multi-family mortgages (that is mortgages backed by dwellings housing multiple families) between 1957 and 1965 to build housing for military families under the 1955 Capehart Housing Act. 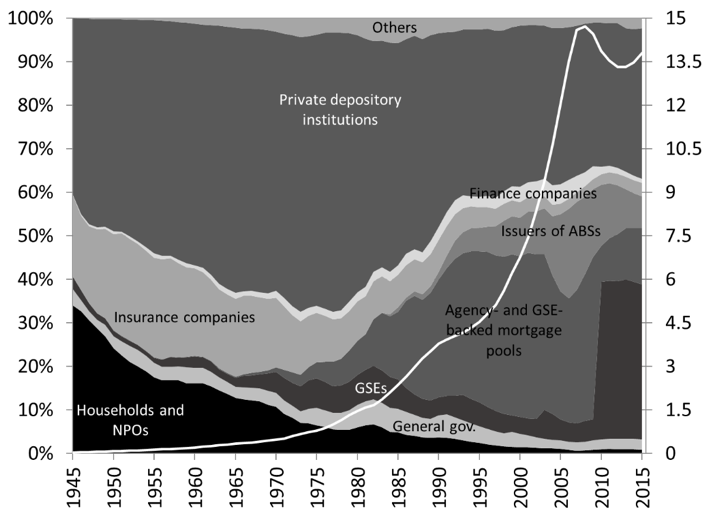 Figure 18.27. Structure of holders (percent) and level (trillions of dollars) of mortgages.
Source: Board of Governors of the Federal Reserve System (series Z1, L.217)

Mortgages deal with long-term financial needs to purchase expensive physical assets. Households also need funds for their daily expenses; to go to school, to buy food, to buy a car, among others. The category “consumer credit” regroups all sort of secured and unsecured promissory notes issued by households with short- to medium-term to maturity that are not marketable; credit card receivables, automobile debts, student debts, health care debts, among other debts (Figure 18.29). Some of these promissory notes, such as automobile debts, are secured (if a household defaults, the bearer of the note takes the car and resells it). All of them promise to pay interest and principal periodically and on time.

Households and small businesses are not the only ones who issued non-marketable securities. The US Treasury is a major issuer of such promissory note. There are not marketable either because they are issued to a specific person and so are not transferable to another bearer (US savings bonds are issued to specific individuals and so the coupon and principal can only be paid to that individual), or are held for internal purpose within different agencies of the federal government. While US savings bonds (issued to households) used to be the main type of non-marketable Treasury securities, in 2015 there were $2 trillion of non-marketable Treasury securities and 90 percent of them were held by various federal government retirement funds (Figure 18.30).

Other non-marketable promissory notes are pensions owed by public and pension funds, pension entitlements, and insurance contracts. These types of promissory note are contingent, that is, they make payments to bearer when an event/contingency occurs (retirement, car crash, etc.). In exchange, bearers have to make a periodic payment to the issuer of these contracts (insurance premium, contributions to retirement accounts, etc.). Post 19 will study them more carefully. For example, the outstanding amount of pension entitlements (retirement savings plans such as investment retirement accounts and annuities) owed to households was about $21 trillion in 2015. While the federal government retirement funds used to be the main issuers of retirement savings plans with 60 percent of outstanding contracts, today that proportion has shrunk to 20 percent. State and local government pension funds and private providers of pension (pension funds and life insurance companies) are now the main issuer of retirement savings plans (Figure 18.31). 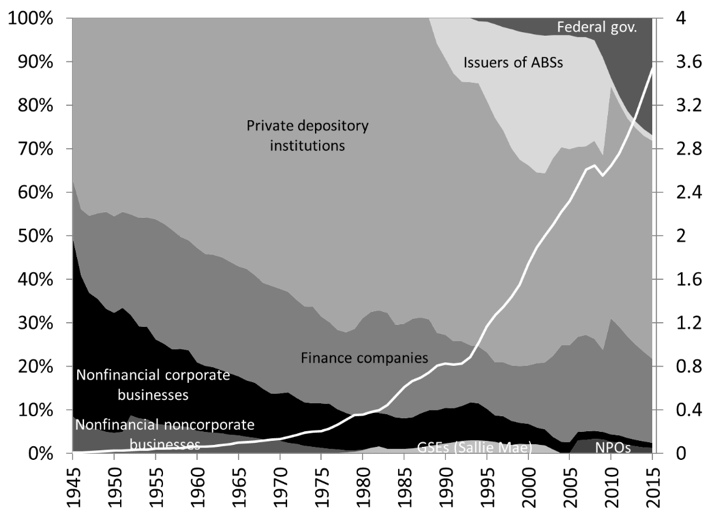 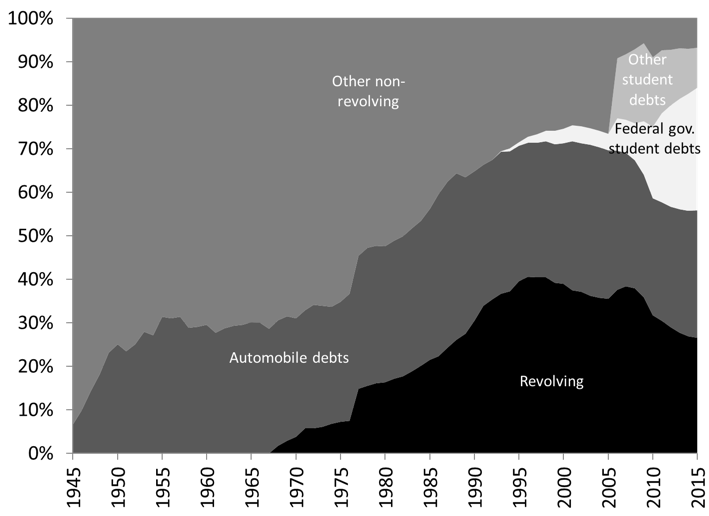 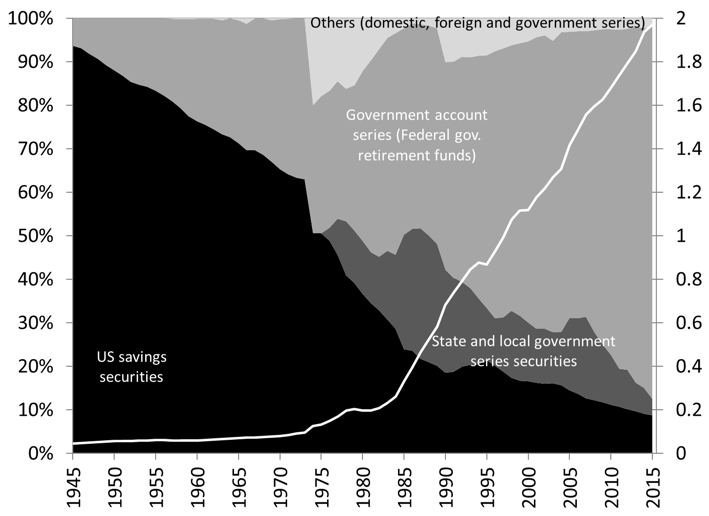 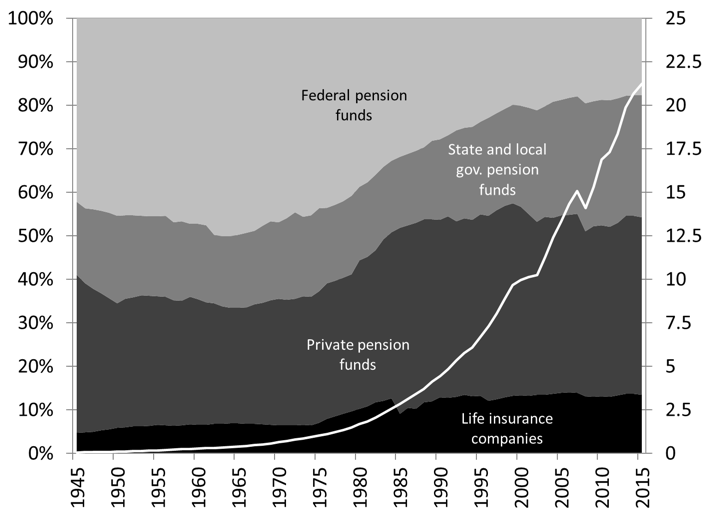 There is a very wide range of promissory notes issued in the United States that vary in terms of term to maturity, in terms of the type of income paid, in terms of the protection provided, among others. One may wonder why so many different types of promissory notes are issued. One of the reason is that issuers have different needs; a household does not need or want to fund its grocery shopping with a 30-year mortgage, and buying a house with a credit card, if possible, would be expensive and cumbersome. Another reason is that bearers are have different needs. Given the nature of their own liabilities (presented in Post 19), pension funds much prefer to hold long-term securities that are safe, while money market mutual funds prefer short-term securities. As such, the US Treasury, one of the main issuer of securities, actively managed the structure of Treasuries to accommodate the needs of bearers. For example, if bearers want more long-term treasuries, US Treasury will consider those needs when it issues new Treasuries.

Not everybody can issue marketable promissory notes because the financial, legal, and administrative requirements to meet are too high. For example, most individuals and small businesses do not need much more than a few hundreds of thousands of dollars—a few millions at best—to buy a house and other assets, which is not interesting to financial market participants that deal mostly with economic units who want to raise hundreds of millions, or billions, of dollars. Similarly, the earnings of households and small businesses are too small to provide an attractive income to financial market participants. Finally, to be able to issue bonds and keep them listed of an organized exchange (see Post 19), one must go through several costly and cumbersome steps such as releasing quarterly detailed accounting documents (balance sheets and others). Some celebrities, such as David Bowie, have been able to issue personal bonds (“Bowie bonds”) but they needed tens of millions of dollars ($55 million for David Bowie, a small issuance) and have earnings (such as music royalty revenue streams) that are large and stable enough to make payments due on the bonds.

Finally, within a country, there is a hierarchy of promissory notes in the sense that some are more easily accepted. The most widely accepted promissory notes are those that are negotiable, of the highest creditworthiness, of the highest liquidity, and of the shortest term to maturity. In contemporary economies with a monetarily sovereign government, central-bank monetary instruments (Federal Reserve notes and checking accounts issued by the Federal Reserve) are at the top of the hierarchy. They are followed by bank monetary instruments (banknotes, if possible, and bank accounts).

At the bottom of the hierarchy, there are all sorts of promises such as local currencies and personal non-marketable promissory notes. 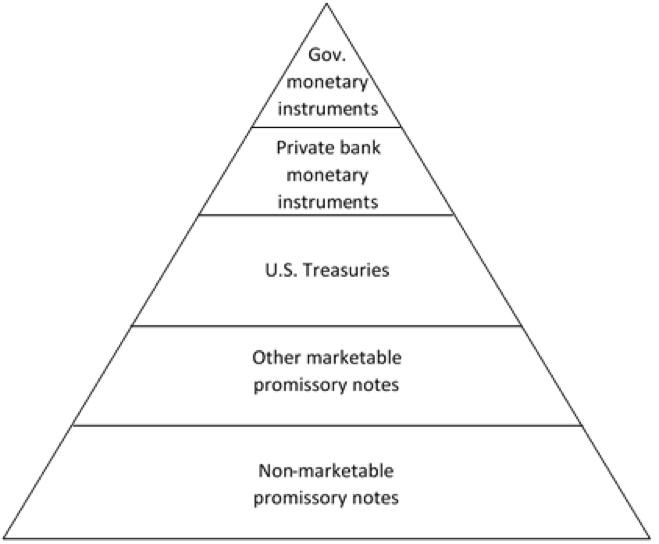 Figure 18.32 Hierarchy of some promissory notes issued in the United States

Figure 18.33 shows the outstanding dollar amount and structure of all the promissory notes presented above together with a few others. Note that off-balance sheet derivate contracts (see later post) are not included although their outstanding value is around $700 trillion. There are also other debts that are not included such as special drawing rights, US-dollar denominated foreign account (Eurodollars), and other items in the Financial Accounts such as tax payables and trade payables. 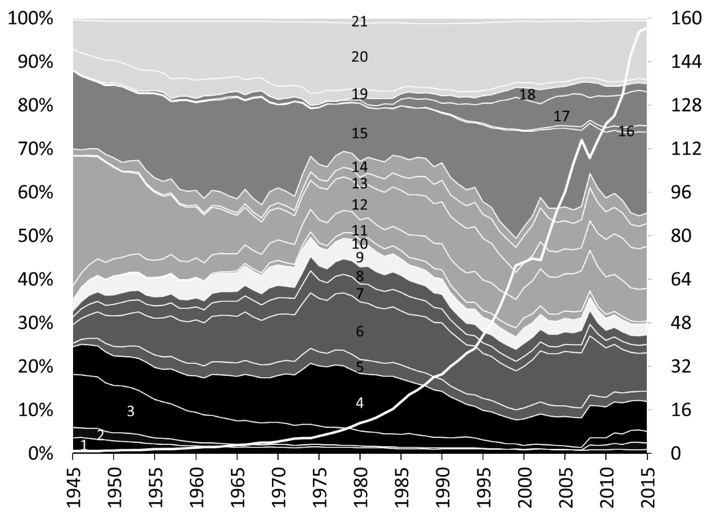 That’s it for today! Next post studies the financial institutions involved in creating, pricing and holding all these promissory notes.

This article appeared originally at New Economic Perrspectives 29 May 2017.

Previous articles in this series:

An Investigator’s Guide To Ethics, Part 2: Why Good People Do Bad Things

An Investigator's Guide To Ethics, Part 2: Why Good People Do Bad Things