Income Is Not Wealth

Some time back, a reader commented on one of my posts stating:

Just out of curiosity for whom have lower taxes created more wealth? Certainly not the middle class – you know, the people in the charts up above with the 40k or less in net worth. A large number of folks in that median and sub-median are pay little or no Federal income tax, although if they work they do pay the flat earnings tax called FICA. Yet they still can’t or won’t save.

Recently, Statista pumped out this graphic:

How many people have a savings account? I do not have one. My “savings” is in a brokerage account.

So many Americans have savings – just not savings accounts.

Historically, the way to wealth for the majority was not through income but through investments.

But something has happened in the 21st century which has weakened this argument.

Real income for most is slightly below the levels seen at the end of the 20th century (red line on graph below). Still, the average family’s net worth has improved a few percent since 2000.

But, unfortunately, their stock holdings are little changed since 2000. 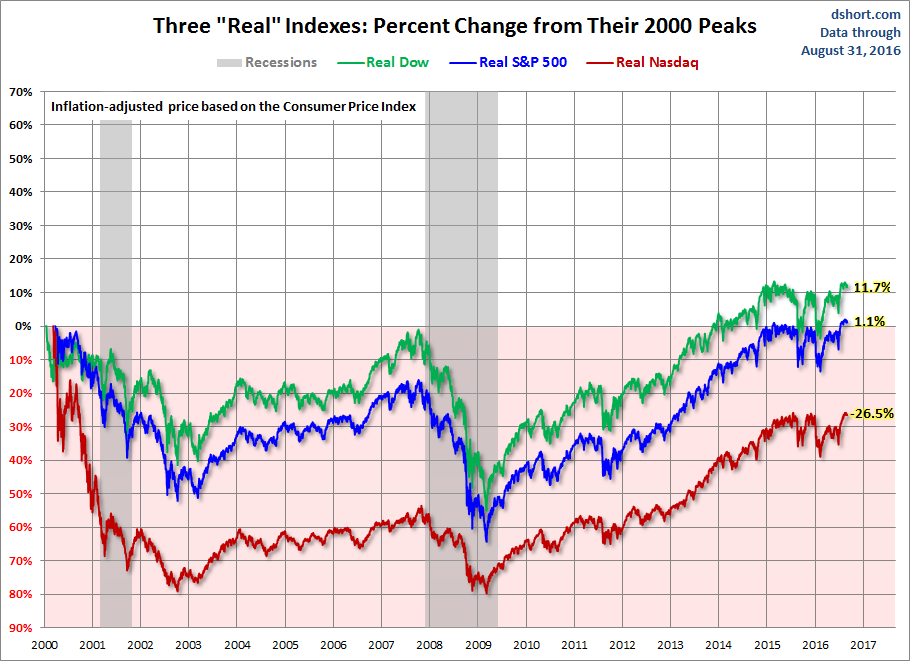 “Just out of curiosity for whom have lower taxes created more wealth?”

When you are spending your entire income to survive – the change in tax rate only affects how well you can survive – it cannot create wealth. My position is that the majority of Americans are in survival mode – spending all of their income. And this spending all your income pervades all income groups – logically the bottom more than the top. Investing (and wealth accumulation) requires one to live under their means.

The Econintersect Economic Index for October 2016 insignificantly declined with the economic outlook remaining weak. The index remains near the lowest value since the end of the Great Recession. Some sectors of the economy continue to give recession warning flags. Employment growth forecast indicates little change in the rate of growth.

The Countries With The Most Competitive Economies

The Countries With The Most Competitive Economies