Initial unemployment claims virtually always hit their low for the year in the first week of September, but the September 27 week cracked that low to reach an all time record low in claims per million workers. This is an unsettling fact illustrating just how distorted and overheated the US jobs market is in some sectors. Companies can’t find the workers with the qualifications they need, so they’re not laying off. In the past, such conditions have been the precursor to bear markets in stocks along with economic contractions.

The headline, fictional, seasonally adjusted number for initial unemployment claims came in at 287,000. The consensus guesstimate of Wall Street economists had been 297,000. There was little reaction in the markets, which may have been more focused on Super Mario Draghi’s ECB press conference.

The actual, not seasonally finagled numbers, which the Wall Street captured media ignores, shows claims at all time record levels on the basis of claims per million workers. The unadjusted total was the lowest since September 2000, and significantly lower than at the top of the housing bubble in 2006. This continues 12 months of near record readings or record readings. Since September 2013 when the number of claims first fell to a record low, the data has suggested that the central bank financial engineering/credit bubble has been at a dangerous juncture.But thanks to their slavish and idiotic focus on only the made up seasonally adjusted (SA) numbers, news media press release repeaters have given little indication that by historical standards the numbers have represented a danger sign. The media echo chamber continues to present record lows as positive, rather than the danger sign that it is.

Here are the actual unmanipulated numbers and the data showing why those numbers are so troubling. 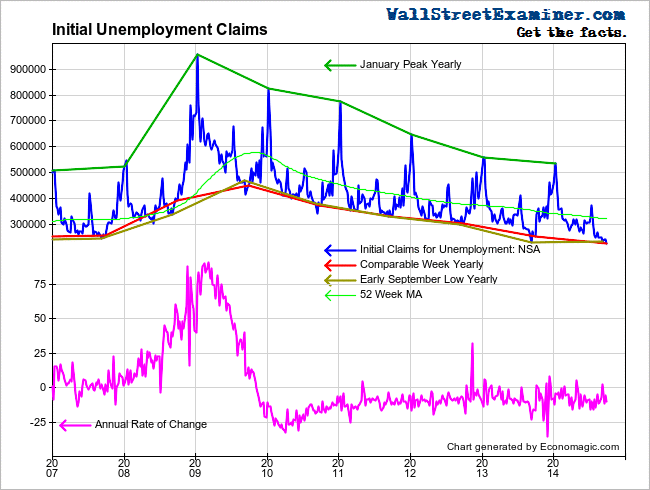 Initial Claims and Annual Rate of Change- Click to enlarge

Actual initial unemployment claims were 10% lower than the same week a year ago. The normal range of the annual rate of change the past 3.5 years has mostly fluctuated between approximately -5% and -15%. The current number is smack in the middle of the range. There are no signs of weakening yet.

The actual week to week change last week was unremarkable, at a decrease of -12,920. There’s no seasonal pattern in the fourth week of September. It’s a swing week in which claims sometimes increase and sometimes fall. The average of the prior 10 years for that week was a decrease of -8,945.

New claims were 1,634 per million workers counted in August nonfarm payrolls. September payrolls should show an increase in workers, so the number of claims per million workers will be even lower than this. This number compares with 1,780 per million in this week of 2007, which was when the housing bubble was starting to deflate, and 1,830 per million in the comparable week of 2006, around the top of the housing bubble.This week’s number broke the record low set in the first week of September 2013. In each ensuing week over the past year the numbers remained at or near record levels for the comparable week. 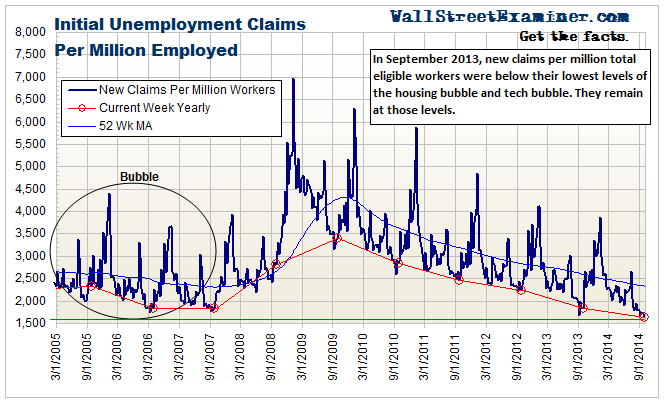 These numbers persisted at extreme levels at the tops of the last two bubbles for a year before the collapses got rolling. The foundations were already beginning to crumble by the time the first anniversary of record readings rolled around. Today’s situation is similar to those. Stocks have dipped this week and are on the cusp of major trend sell signals. We seem to be on a hair trigger here. Meanwhile, the continuation of this trend will continue to encourage the Fed to continue to pull the punchbowl. It is that action that will trigger the collapse of the house of cards built with Fed paper. And contrary to what Mario Draghi wants us to believe, I don’t think that the ECB will step in and save the world. 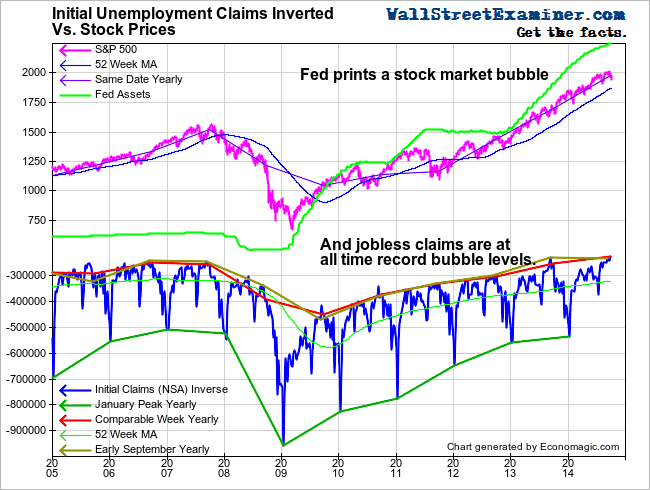 Make No Mistake, the TTIP is a Move in the Wrong Direction

Stratfor: Turkey, the Kurds and Iraq – The Prize and Peril of Kirkuk

Stratfor: Turkey, the Kurds and Iraq - The Prize and Peril of Kirkuk