The seasonally adjusted headline number was 329,000. Keep in mind that that is a made up number. Conomists consensus was for 312,000. Not a bad guess. Bloomberg blamed the seasonal adjustment factor for the Easter holiday for the miss. The actual unadjusted data was absolutely consistent with the trend.

According to the DoL – “The seasonal factors had expected a decrease of 42,668 (or -13.4 percent) from the previous week,” versus the actual decline of 20,923. The 10 year average for the comparable week was a drop of 29,306. Accounting for the holiday, this was a slightly below average performance for the week. 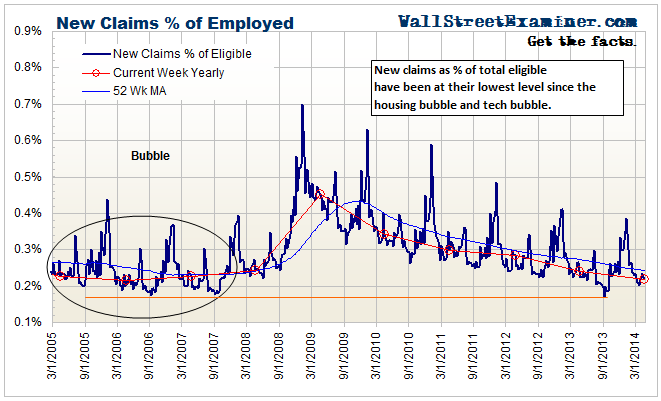 New Claims % of Eligible at Record Lows – Click to enlarge

This suggests an economy stretched to its limits by the distortions and missallocation of labor caused by QE.