Initial claims for unemployment are below bubble record levels after first reaching that extreme in September of last year. The warning signs of a distorted, maladjusted, overheated economy continue.

The headline, seasonally adjusted (not actual) number for initial unemployment claims for the week ended July 12, the 27th week of the year, was 302,000, which was 11,000 less than the consensus guess of Wall Street economists. The actual numbers, which the Wall Street captured media ignores, again show claims below the levels reached at the top of the housing/credit bubble in 2006, a condition which has now persisted for 10 months. Since September 2013 when the number of claims first fell to a record low, the numbers have suggested that the central bank driven financial engineering/credit bubble has reached a dangerous juncture.

The headline number is seasonally adjusted, therefore fictional. It may or may not give an accurate impression of reality, depending on the week. The recent seasonally adjusted numbers, and the way the mainstream media reports the numbers, give little indication that by historical standards the numbers of firings and layoffs that lead to unemployment claims represent a danger sign. No one is ringing alarm bells. Bulls view this condition as a sign that the economy has reached “escape velocity.” Bears suggest that this is” as good as it gets.” I think it’s even more ominous.

It’s standard practice in the media for mainstream pundits to be looking the wrong way, but until the last couple of weeks I hadn’t even seen any independent bloggers raise this issue either. Now some observers have come up with the term “as good as it gets.” They’re catching up to reality, but are still behind the curve. In my view, the economy reached that level last fall. Perhaps a year or two from now they will look back and say, “The economy was overheated, but nobody saw it,” except for those of us who pay attention to the actual data, as opposed to the seasonally adjusted diversion that everyone is fixated on.

Actual initial unemployment claims were 10% lower than the same week a year ago. The normal range of the annual rate of change the past 3.5 years has mostly fluctuated between -5% and -15%. The current number is just a continuation of the bubble trend.

The actual week to week change last week was an increase of 47,000. Increases are normal for this week of July. The current number is consistent with the average change for this week.

New claims were 2,644 per million workers (based on June nonfarm payrolls). This compares with 2,759 per million in this week of 2007 and 2,768 per million in the comparable week of 2006, at the very top of the housing bubble. In September 2013, this figure set a record low. In each ensuing week the numbers have remained at or near record levels. 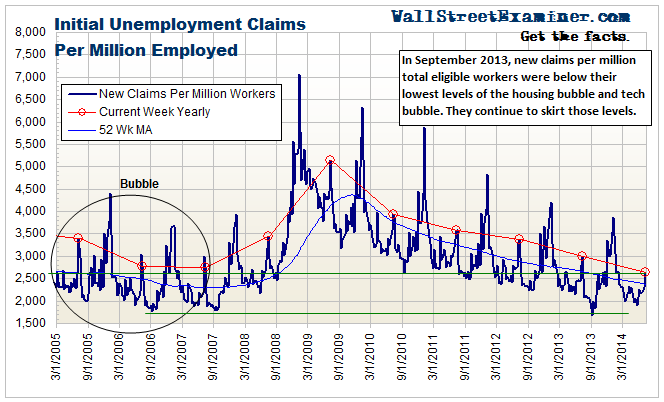 A soft economy with high unemployment, but where hardly any workers are laid off each week suggests that employers are holding on to the workers they have with the skill sets they need because they cannot find those skills in the enormous pool of unemployed workers. The labor market of those with needed skills is tight. The recent surge in job openings shown by Janet Yellen’s favorite measure, the JOLTS Survey (Job Openings and Labor Turnover), supports that view.

The Week Ahead: How Will Fed Monetary Expansion End?