The year to year increase in inflation, as measured by the Finished Consumer Goods PPI ex food and energy slipped to +2.67% in August. That’s down from +2.92% in July, but obviously it’s above the Fed’s 2% target. 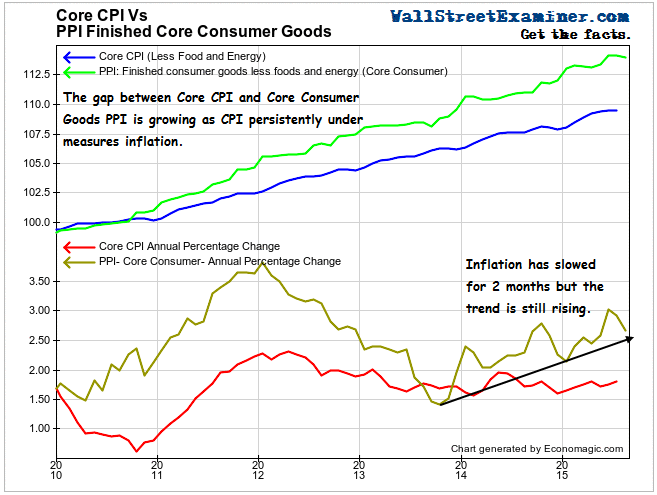 I like this measure because, unlike the CPI, it is not skewed lower by under measuring the cost of housing and then overweighting the under measured number in the total index. The BLS uses a cheap trick called owners equivalent rent to reduce the actual inflation rate for housing, then it imputes the phony number as 41% of Core CPI. You can read the dirty details of how its done here.

If you are like most people, the unmassaged Core Consumer Goods PPI measure of inflation is probably much closer to the experience you have had with rising prices for the past several years. With the exception of 5 months in 2013, it has been above the Fed’s 2% target since 2010. It fluctuates, but it has been above 2% more than 90% of the time for the past 5 years. The Fed doesn’t like an honest measure like this because it debunks their justification for continuing ZIRP.

And let’s not quibble about whether the Fed is at 0.0% or goes to 0.25% or 0.5%. A little common sense please. Do you really think that a quarter point matters in any economic or investment decision making process, or would in any way cause inflation to slow? Would it even put the squeeze on any carry trades?

Doubtful. At these levels, the cost of capital hardly matters. Wall Street Big Media whips up a frenzy over what is essentially a non issue when the real issue is the quantity of money available to the markets. When the Fed stopped printing last October, that changed the rules of this game. The next question that will matter is whether and when the Fed will actually start to shrink the balance sheet. Now that would really be something to see.

That’s not on the horizon yet, and there’s reason to think that it never will be. It certainly won’t be as long as the Fed focuses on bogus, understated measures of inflation like the CPI and PCE. Rather than speculate about whether and how much the Fed raises rates, we’ll keep our eye on the ball and, as always, track the macro liquidity flows into the US system in the Liquidity Trader Pro.

Is Gold’s Bottom In?

Is Gold's Bottom In?