The Fed’s actual, not seasonally adjusted (NSA) Industrial Production Index was up 3.2% over the past 12 months after declining by 2.1% in April from March. The prior 10 year average decline for the month is -1.7%. Last year, the April decline was only 1.1%.

This year’s April performance was worse than both last year and the 10 year average. However, the current number may have been a giveback for a much stronger than average performance in March, which had a 1.5% gain against a 10 year norm of a decline of 1.4%. The yearly rate of change at +3.2% is consistent with the growth rate of the past 3 years.

The industrial production index is based on units of production and therefore need not be adjusted for inflation. As I have shown in a prior analysis, the gains have been skewed by energy production. If those components are removed, net industrial production ex energy remains below 2007 peak levels. Ex-energy industrial production rose just 2.5% over the past 12 months. The growth rate has been declining since 2010 in spite of all the Fed’s money pumping… Or because of it because it encourages financial engineering at the expense of real investment! 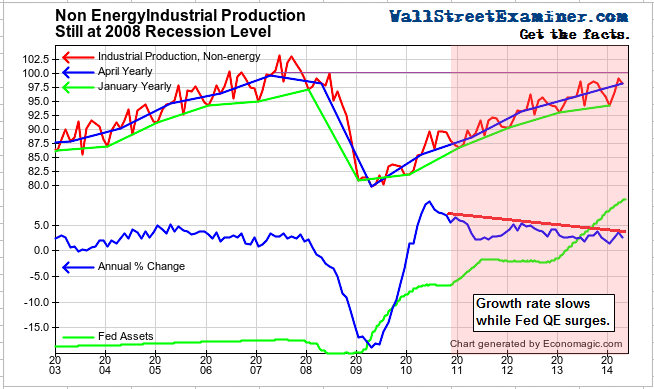 Perhaps the biggest question is, “Can the energy boom be sustained at this pace?” I think the answer should be obvious.

And the next question is, “What happens to the US economy when this begins to moderate?”

Infographic of the Day: The Adjusted Value of Human Life

Infographic of the Day: The Adjusted Value of Human Life