The volume of global trade rose more quickly that world economic growth during the 1980s, 1990s, and up to the global recession that started around 2008. This pattern of “globalization” sparked enormous numbers of books and articles. But during the last few years, the pattern of globalization has first halted, and may even have slightly reversed itself.

Have we reached “peak trade,” so that the the era of rising globalization has ended? Or is the leveling out of the world trade/world GDP ratio just a pause, before globalization starts growing again? An VoxEU.ord ebook called The Global Trade Slowdown: A New Normal?, edited by Bernard Hoekman, explores these questions in an overview essay and 19 mostly readable chapters. To set the stage for the discussion, here are some figures. The first one (from Hoekman’s introduction) shows patterns of exports, imports, and net trade. The top panel shows that levels of imports and exports in G7 countries (the US, Canada, Japan, Great Britain, France, Germany, and Italy) peaked back in early 2008, rebounded back to that level, but has shown a drop-off in early 2015. The bottom panel shows that exports and imports in the BRIICS countries (Brazil, Russia, India, Indonesia, China and South Africa) rebounded to higher-than-2008 levels, but have also shown an actual decline in early 2015. 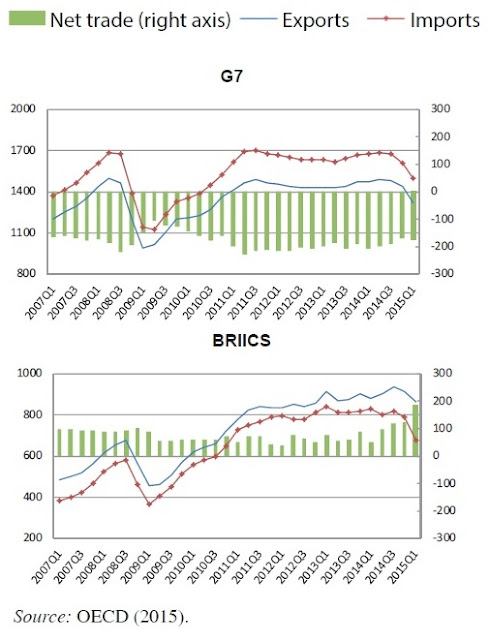 Here’s a figure with a longer and different perspective, from the contribution to this volume by Hubert Escaith and Sébastien Miroudot. The shaded area shows the world trade/GDP ratio since 1970. In this figure trade is measured just by exports; because exports of one country are always imports for another country, if one measured trade by exports plus imports, the measures on the right-hand axis would be twice as high. The solid line measures the “trade-income elasticity,” which is another way of saying if you take the percentage change in trade and divide by the percentage change in world income, what’s the ratio? When trade is growing at the same percentage rate as the world economy, this measure will be equal to 1. 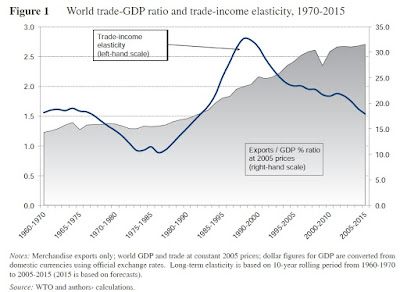 There are two main categories of explanations for why the growth in trade as a share of GDP has paused, and in early 2015 even reversed a bit. One set of explanations is that global recession and slow recovery slowed down trade. Hoekman points out that the EU accounts for about one-third of all global trade, and China accounts for about 10% of global imports. The recent economic struggles of the EU and China’s growth slowdown clearly play a role here, and several authors in the book argue that cyclical factors explain most or all of the slowdown of globalization (for examples, see the essays in this volume by by Emine Boz, Matthieu Bussière and Clément Marsilli. or the one by Patrice Ollivaud and Cyrille Schwellnus).The implication of this view is that when the global economy again picks up speed, the ratio of global trade to world output will start rising again. The other set of reasons is that something else, something “structural” as economist put it, is causing a slowdown in globalization. Of course, even if some structural factors have caused a slowdown in the growth of globalization, it’s possible that other structural factors could again accelerate globalization in the future. In his overview essay, Hoekman identifies four structural factors drawn from various essays that might–although each is controversial in its own way–have contributed to the slowdown of globalization in recent years.

“[O]ur study breaks new ground by employing data on the trade potentially covered by trade-distorting domestic subsidies and export incentives.The impact on LDC exports of different classes of trade distortions was estimated and the total reduction in LDC export growth due to foreign trade distortions was computed for each of the years 2009-2013.”

My own sense, for what it’s worth, is that a resumption of globalization seems likely, in the sense that I expect the ratio of trade/world GDP to start rising again in the next 5-10 years. It seems to me that national borders are still very much a barrier to international trade. But moving value across national borders is getting easier all the time, both because of how information and communications technology facilitates the coordinated movement of goods, and also in how it allows the direct buying and selling of information-related goods and services. As more of the world’s value-added is embodied in information and in services, I expect new opportunities to arise for international transactions to become more casual and unremarked. Now when I order something online from a US supplier, I often have no idea–nor do I care enough to inquire–in what US state the product was made or from where it was shipped. A few years down the road, I expect that consumers and firms all over the world will order both goods and services just as casually from other countries.