Most of the Working Class Missed The Current Economic Expansion

If I hear one more idiot declare how well the economy is doing – I will scream. Half the population has not enjoyed economic improvement in the 21st century.

The economy is measured by the medieval metric which is called Gross Domestic Product (GDP). GDP does not measure or correlate to the economic situation of the median household.

The median household has not seen an increase in income in the 21st century.

Of all USA households, 37%  do not own a house and did not enjoy the 60% appreciation of home prices in the 21st century – but this appreciation is only 17% after inflation adjustment, held down by the housing bubble collapse 2007-2012.

The rate of home ownership has declined to 35-year lows.

Only half of American adults own stocks – and this too is at 21st-century lows. 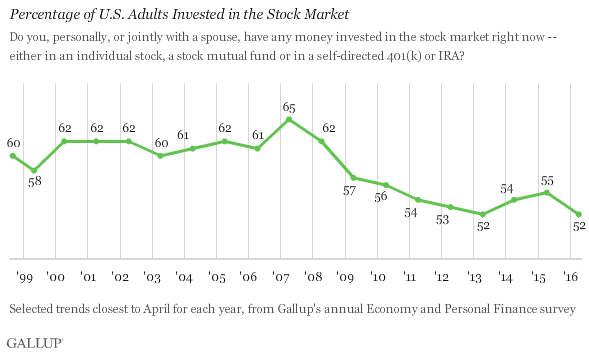 Half the population missed out on the 50% appreciation of the stock market in the 21st century – but this appreciation is only 8% after inflation adjustment, again held down by the two of the largest bear markets since the 1929-32 stock market crash.

It is not much of an exaggeration to say that many of the households below median likely have no real estate or equity assets (house or stocks) – and are spending their entire income (or maybe more). The most recent credible study (which is from 2012) I can find says “just over two-fifths of respondents (41%) report spending less than their income, 36% spend about equal to their income, and 19% spend more than their income.”

As much as inflation has eaten away gains from assets, a worse situation is that if one put their money into a bank certificate of deposit they would have lost 10% due to inflation.

We have years of trickling up and down – and the trends are showing the median household is falling behind.

The left keeps concentrating on increasing minimum wage thinking that a rise in the minimum wage will improve the situation for the lower income households.  In the short term, it will, at the margins – but robotics technology is coming and higher wages will only hasten the process of job replacement with robots. The governing dynamic for employment is shifting to robotics.

The right thinks a rising tide lifts all ships – unfortunately this is true ONLY if the rising tide creates well-paying jobs proportionally to the rising tide.  That has not happened in this century (and indeed for as much as four decades).

The error in logic for both the left and the right is that income is not wealth.  Wealth comes from investing.  And where will the lower half of the households get the money for investing when the majority spend all their income?

The Econintersect Economic Index for December 2016 improved but still with the economic outlook for weak growth. The index remains near the lowest value since the end of the Great Recession. This month there are no recession warning flags. Six-month employment growth forecast indicates minor improvement in the rate of growth.

The Effect Of Brexit On UK Business’ IT Budgets

The Post-Truth Era Of Trump Is Just What Nietzsche Predicted

The Post-Truth Era Of Trump Is Just What Nietzsche Predicted