Forget the Sept. ’15 Fed Tightening – There Has Been a Stealth Tightening Since Sept. ’14

The late, great Milton Friedman used to preach that you don’t assess the degree of monetary policy restriction or accommodation by the level and movement of interest rates but rather by the behavior of monetary quantities. 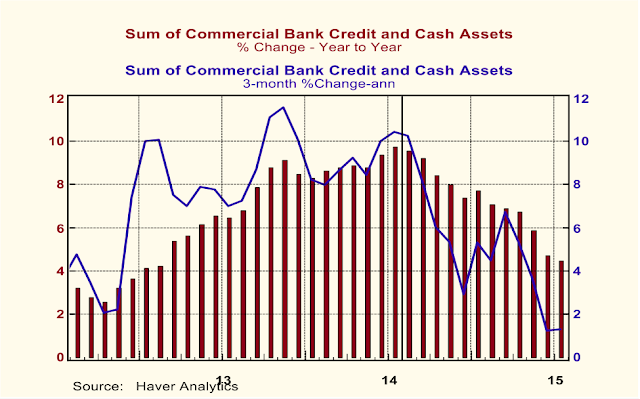 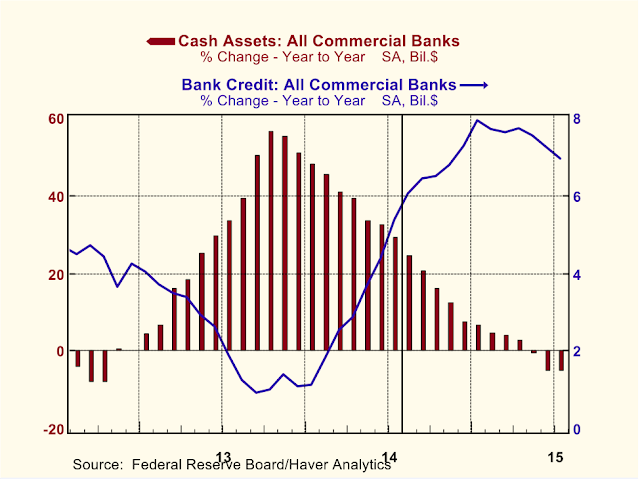 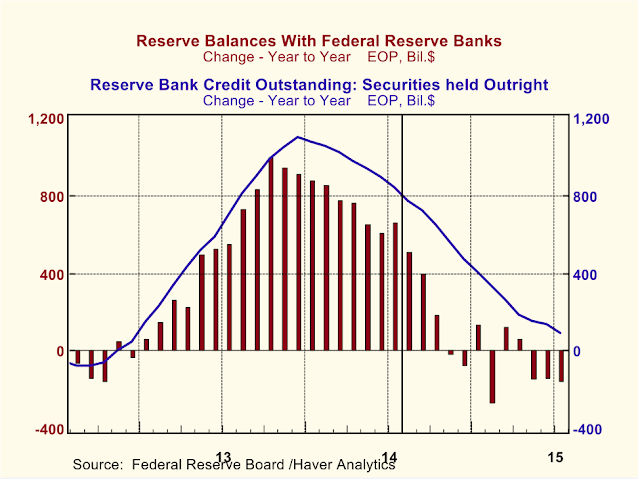 Chart 4 shows that as the year-over-year dollar changes in in the total supply of reserves, Fed security holdings plus other factors such as Federal Reserve float, have become smaller since the Fed began phasing out QE3, the year-over-year dollar changes in factors other than bank reserves absorbing the supply of bank reserves have increased. Some of these absorbing factors such as currency demanded by the public and Treasury deposits held at the Fed are beyond the Fed’s control. Back in the pre-QE era, the Fed used to engage in what were termed “defensive” open market operations to offset undesired absorption of reserves from these uncontrollable factors. 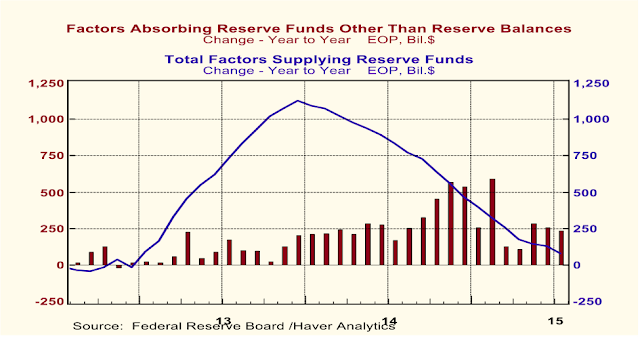 But as shown in Chart 5, there have been some factors absorbing the supply of reserves under the Fed’s control that have been increasing. These two reserve-absorbing factors controlled by the Fed are reverse repurchase agreements with government securities dealers and money funds and term deposits offered to commercial banks and other depository institutions. For reasons known only to it, the Fed began “experimenting” with these reserve-absorbing operations early in 2014 as it began tapering its reserve-supplying securities purchases. The Fed then stepped up its reserve-absorbing operations from October 2014 through February 2015, after it had ceased its QE securities purchases. Go figure. 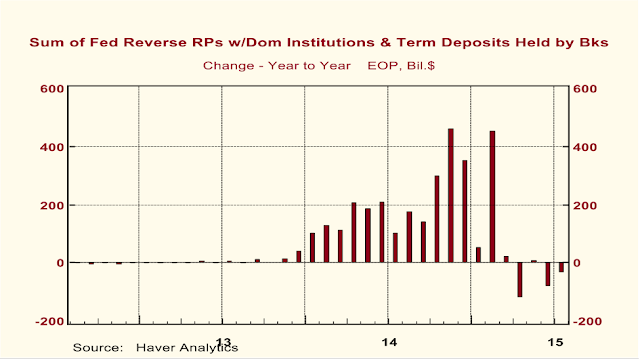 The upshot of all this is that from a monetary quantity perspective, monetary policy has tightened significantly from a year ago. Growth in the credit being created by the private banking system has returned to near its long-run median rate after having been severely constrained during and after the 2008 financial crisis. But total thin-air credit growth is below its long-run median rate because of the slow growth or contraction in the Fed’s contribution. In my opinion, the Fed was correct in phasing down its securities purchases when it commenced to do so. Growth in total thin-air credit was excessive at that time. But without the Fed having any clear understanding of how many securities to purchase when it commenced its three QE programs, it had no idea of by how much it should taper its securities purchases. The Fed’s management of securities purchases and reserves growth needs to be guided by what was happening to growth in total thin-air credit – banks’ contribution and the Fed’s. There is absolutely no evidence that the Fed has been guided by this. As a result, monetary policy has gone from one extreme – overly accommodative – to the other – overly restrictive. The more things change, the more they stay the same. Now, let’s talk about something important – the recent swoon in the U.S. stock market. Plotted in Chart 6 are the year-over-year percent changes in monthly observations of the Wilshire 5000 stock market along with year-over-year percent changes in monthly observations of thin-air credit. Although growth in the Wilshire 5000 peaked about six months before thin-air credit growth peaked, the peak in the Wilshire 5000 growth occurred around the time the Fed began tapering its securities purchases. To the degree that financial markets anticipate events, it is conceivable that the stock market movers and shakers anticipated that the Fed’s phasing out of its securities purchases would eventually have an adverse effect on stock market values. 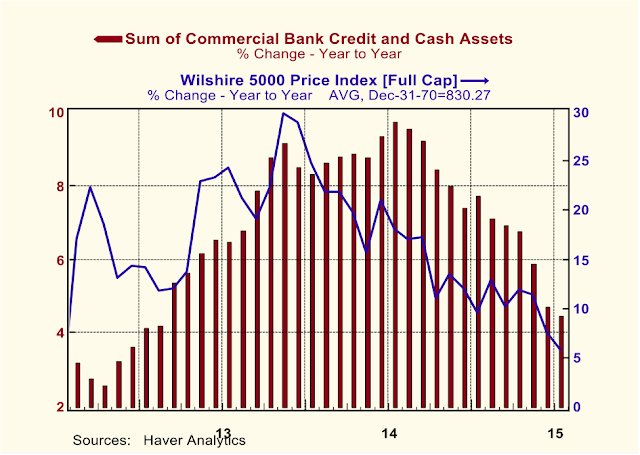 After massive purchases of securities by the Fed, why might the cessation of these purchases have an adverse effect on stock market values? When the Fed purchases securities, the sellers are government securities dealers. Dealers do not hold the quantities of securities that the Fed was purchasing during QE, especially after the 2008 financial crisis. In order to accommodate the Fed’s demand for securities, dealers bid for securities that their customers held. Dealers’ customers are large institutions, e.g., pension funds, insurance companies, mutual funds, and banks. The dealer community was an intermediary between the Fed and large financial institutions. So, when the Fed purchased securities, ultimately, large financial institutions sold securities and received cash. It is unlikely that these large financial institutions were to content to give up an earning asset for cash that has no explicit nominal return. Rather, these large financial institutions used the cash it received indirectly from the Fed, cash created figuratively out of thin air, to purchase other earning financial assets. Some of these assets purchased by large financial assets might have been equities. Some of these assets might have been bonds issued by corporations for the express purpose of financing their share buybacks. The Fed’s creation of thin-air credit likely financed, directly or indirectly, increased purchases of riskier financial assets, which, in turn, boosted the prices of these riskier assets. If so, then the Fed’s cessation of securities purchases and contraction in its contribution to thin-air credit would reduce the demand for riskier assets, which would have an adverse effect on their prices. So, why did I wait until now, after the recent swoon in the stock market, to tell you that the Fed’s cessation of QE would have an adverse effect on the stock market? Well, truth be told, I did alert you to this probability back on November 17, 2014, in a commentary entitled “2015 Is Shaping Up to Be a ‘Turkey’ of a Year for the U.S. Economy and Stock Market”.

But the truth also be told, I had no idea that a stock market swoon would occur in August 2015. In fact, I had no idea a stock market swoon would occur at any time in 2015. But it did appear to me back in November 2014 that thin-air credit growth was likely to decelerate sharply in 2015 compared to 2014. And that a sharp deceleration in thin-air credit growth would have adverse effects on nominal aggregate demand and the value of risk assets. The adverse effect on the value of risk assets appears to be upon us. Of course, the collapse of the Chinese stock market has played a large role in the decline in prices of U.S. risk assets, perhaps a larger role than the sharp deceleration in U.S. thin-air credit. Weather-adjusted, U.S. aggregate demand has held up relatively well. I suspect that will change in the fourth quarter of this year.

In the face of very low goods/services price inflation and weak wage growth, the recent U.S. stock market rout is likely to postpone the previously-anticipated September 2015 Fed rate hike. It is too early to expect QE4. But the Fed certainly has the leeway to restart securities purchases if need be. In other words, take some comfort in a Yellen put.