The media and financial talking heads continue to spout on the odds of a federal funds rate increase either in June, July or whenever. The poor employment report for May seems to have caused most analysts to rule out a June rate increase. The Federal Reserve FOMC members keep opening their mouths with conflicting statements on the economy, and FOMC Chair Yellen proclaiming “U.S. economy will continue to improve“.  Confused?

The Fed loses credibility if they do not time actions relative to economic movement. The Fed wants us to believe they are on top of economic movements. Plainly, they are not. Unless you PERSONALLY sift through data daily without prejudicial lenses, you will be blinded by the chaotic headlines – and miss the backward revisions which have been generally downward.

All of us should want the future to be better than the present, but the Fed is in a Catch-22 situation as they believe presenting a negative economic forecast will be self-fulfilling. Better to say nothing than say the economy will worsen. How does that work with “forward guidance” and “transparency”?

And the economy continues to be heading downward. Some say a recession is possible. As always, I warn that when an economy is going slow – any bump can cause it to dip below the zero growth line. Still, there is little evidence that any dip into recession would be large – the USA snail economy is simply flirting with zero growth.

The Fedoholics are encouraged by 2Q2016 GDP forecasts from the Atlanta Fed and the New York Fed which are showing second quarter growth around 2.5%. This is a major improvement from first quarter growth currently less than 1 %.   However, I reject GDP as an accurate metric of the economy – as it has too many elements which are not related to Main Street (and not to mention most of these elements are volatile).

There are flags which are showing the USA is close to zero growth: 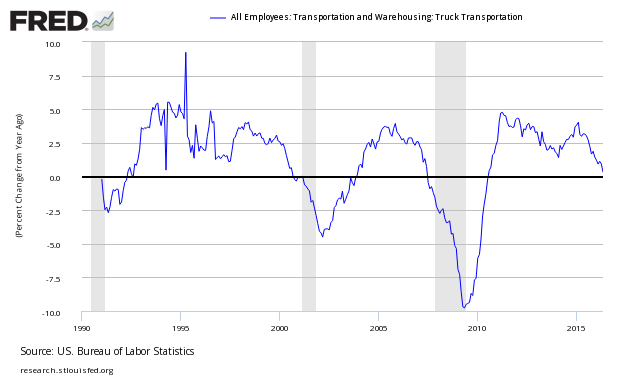 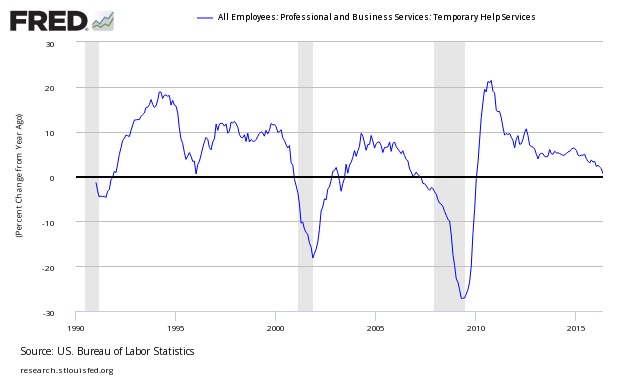 There are many more caution flags such as corporate debt, manufacturing, consumer credit, global trade, and transport counts. I see very few data sets with accelerating trendlines. Trends remain until they no longer remain – and are much more accurate in projecting the future than the smoke and mirrors non-analytical rosy economic projections from many economists.

Raising the federal funds rate anytime soon will make the actions and knowledge of the Federal Reserve look like the antics of the Three Stooges. Yet, I see little proof that the zero bound interest rates are beneficial (except in very short spurts). And there is some evidence (far from conclusive) that the zero bound rates are restraining economic growth. Chart Of The Decade: European Banks Fleeing German Banks Like Rats From A Sinking Ship

Chart Of The Decade: European Banks Fleeing German Banks Like Rats From A Sinking Ship