Yes, the economy is doing so well, in the coming final day of the Fed’s staged withdrawal from QE, the Fed’s choppers will leave from the rooftops of Washington and Wall Street as friendly forces scramble to get aboard the last one. That’s how well things are going.

As the banksters leave town with their sacks of stolen gold on the last of those Fed copters, the population will be abandoned to fend for itself, after years of having their savings stolen and no fake jobs created to ease their pain in return. The good manufacturing jobs left decades ago, and there are no new orders for big ticket goods coming to restore them.

But fear not, workers of America! Yesterday we got the good news that new job openings in February were the highest in six years. Bubbleberg was so enthused, it blabbered:

Job openings in the U.S. rose more than forecast in February to a six-year high as employers moved to boost hiring in response to rising consumer demand.

The number of positions waiting to be filled in the U.S. climbed by 299,000 to 4.17 million in February, the most since January 2008, from a revised 3.87 million the month before, the Labor Department reported today in Washington.

I wondered if those “positions” were missionary or doggie style. And I thought, “Wow, since 2008? But aren’t there 24 million more Americans now than then? Wouldn’t it be more honest to reveal the job openings ratio?” So, as is my compulsion, I chewed on my thoughts and digested them. Below is what came out. 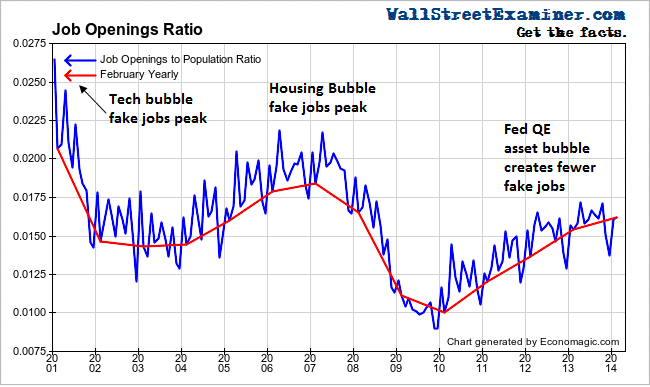 But 5 years of the Fed’s helicopter money to speculators and banksters and ZIRP’s financial genocide of savers have not brought back the fake bubble jobs of 2006 and 2007. And we’re not even close to getting back to the 2001 level, which was boosted by the remnant fake jobs left over from the then collapsing internet bubble.

The question is not only, “Where are the jobs?” It’s, “Where are the fake jobs?” Apparently the financial repression and wealth transfer caused by ZIRP and QE are not only not capable of stimulating good jobs, they can’t even stimulate fake ones. In fact, the incentives of those policies are such that the corporate bosses have learned that they can have it all, and keep it all, through free money based financial engineering, and by squeezing labor, rather than growing their businesses and expanding job opportunities.

So the Fed, on reviewing its glorious victory, decides it’s time to pack up and go home. The choppers are on the rooftops, ready to abandon the market. The banksters, speculators, and the 1% are on those aircraft, having been able to keep almost all the helicopter money for themselves. They let little trickle down. Well done, Ben! Well done, Janet! Goodbye QE! Goodbye Mr. Hanky! We always believed in you. Long live QE. Dick Trickle is dead.