Here’s a brief review of the charts from a few of last week’s economic data releases.

The Labor Department’s Job Openings and Labor Turnover Survey reported 4.12 million job openings (actual- not seasonally adjusted) in January, a 7.4% increase over January 2013. The growth rate has ranged from 6% to 11% over the past 6 months which is somewhat slower than the 2011-2013 growth rates. January’s job postings rose 21.7% over December’s, which is consistent with a typical January. The January 2013 gain was the same. The 10 year average gain for January is 18.6%.

It is striking that the annual growth rate was stronger during the period when the Fed was in a long QE pause in 2011-12. The growth rate has slowed since QE 3 began late in 2012.

The Labor Departments weekly initial jobless claims headline number came in at 315,000 last week, which was better than the economists’ consensus guess of 335,000. The actual, not seasonally adjusted number was 302,000 which was 4.6% less than the same week a year ago. The week to week change was a drop of 15,600, which was slightly less than the same week last year. The rate of improvement had been mostly around 10% from 2010 through Q3 of 2013. That rate has slowed since Q4 of 2013 to the 0 to 5% range.

A comparison of initial claims on an inverse scale chart alongside of the S&P 500 illustrates the bubbly nature of stock prices over the past 18 months.

The headline number for February retail sales of a monthly gain of 0.3% was better than the economists’ consensus guess of a 0.2% gain. However, the actual, not seasonally adjusted data wasn’t that great. February retail sales of $385.1 billion were up just 1.5% year over year. The month to month change of a decline of 1.2% was worse than the February 2013 drop of 0.4% and also worse than the 10 year average for February of a decline of 0.1%.

To get a better idea of the volume of discretionary retail sales I adjust the data for inflation and back out gasoline sales which are more or less non discretionary, and because of price volatility tend to skew total sales in the opposite direction of the underlying trend of discretionary spending. Real retail sales ex gasoline were up 1.6% year over year which is within the range of the trend of the past couple of years. The monthly change was a decline of 0.14%, which was better than February 2013′s drop of 0.9% but near the 10 year average February decline of -0.2%. 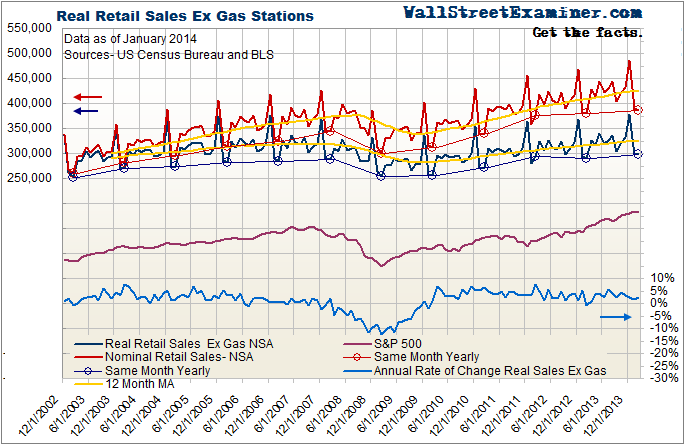 It is interesting that none of these series reflect the strength in real time Federal withholding tax data which is running at an annual real growth rate of 5.5% as of mid March. If bad weather did indeed suppress February data, there may be a build up of pent up demand which could be unleashed in March, leading to upside surprises in March data releases. As the numbers strengthen, it will encourage the Fed to accelerate the tapering of QE.

I will post updates on today’s releases of data on industrial production, housing starts, and the NAHB home builders’ survey later.

Market Commentary: Investors Undecided Which Road To Take Ahead Of FOMC Meeting

Market Commentary: Investors Undecided Which Road To Take Ahead Of FOMC Meeting