Econintersect: The National Federation of Independent Business (NFIB)’s August 2014 monthly optimism index improved from 95.7 to 96.1. The market was expecting the index between 96.0 to 97.0 with consensus at 96.0. The four “hard” measures (job creation plans, job openings, capital spending plans and inventory investment plans) were collectively unchanged, and the other 6 components added to the Index a bit to produce a modest gain.

Expectations are still glum, although improving grudgingly. More owners still think business conditions will be worse in six months than think they will be better. Few see the current period as a good time to expand. The outlook for improvements in real sales volumes faded. Interest in borrowing continues to remain at record low levels; owners are satisfied with inventories and aren’t planning a lot of investment. There is still no evidence that we are about to ramp up spending and hiring to “3 percent” GDP growth levels. 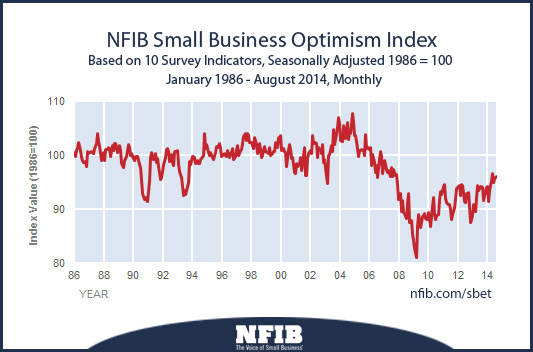 Some other highlights of this Optimism Index include:

Labor Markets. NFIB owners increased employment by an average of 0.02 workers per firm in August (seasonally adjusted), the eleventh positive month in a row but basically a “zero” net gain. Small business owners aren’t adding much to the job growth statistics. The remaining 78 percent of owners made no net change in employment. Fifty-six percent of the owners hired or tried to hire in the last three months and 46 percent reported few or no qualified applicants for open positions. Twenty-six percent of all owners reported job openings they could not fill in the current period, up 2 points, suggesting no change or a modest reduction in the unemployment rate. Sixteen percent reported using temporary workers, up 1 point and up 2 points over the past two months.

Sales. The net percent of all owners (seasonally adjusted) reporting higher nominal sales in the past 3 months compared to the prior 3 months improved 1 point to a net negative 2 percent, still one of the best readings since 2007, but fewer owners reporting gains than reductions. Thirteen percent cited weak sales as their top business problem, one of the lowest readings since December 2007, the peak of the expansion. Expected real sales volumes posted a 4 point decline, falling to a net 6 percent of owners expecting gains.

Earnings and Wages. Earnings trends improved 1 point, rising to a net negative 17 percent, one of the best readings since 2007. Rising labor costs are keeping pressure on earnings, along with poor sales performances. Two percent reported reduced worker compensation and 25 percent reported raising compensation, yielding a seasonally adjusted net 22 percent reporting higher compensation, up 1 point and the second best reading since the first quarter of 2008. A net seasonally adjusted 15 percent plan to raise compensation in the coming months (up 1 point). The reported gains in compensation are now solidly in the range typical of an economy with solid growth, but it isn’t clear that we have “solid growth”, unless we are ready to settle for the sub-par tunnel we have been in.

Credit Markets. Four percent of the owners reported that all their credit needs were not met, equal to the record low. Twenty-eight percent reported all credit needs met, and a record high 55 percent explicitly said they did not want a loan. Only 2 percent reported that financing was their top business problem compared to 24 percent citing taxes, 19 percent citing regulations and red tape and 13 percent citing weak sales. The net percent of owners expecting credit conditions to ease in the coming months was a seasonally adjusted negative 5 percent; more owners expect that it will be “harder” to arrange financing than easier. This is the most favorable reading about credit market conditions since 2006, occurring at a time when the Federal Reserve is terminating its aggressive QE3 policy. Interest rates are low, but prospects for putting borrowed money profitably to work are not great and so loan demand remains weak among small business owners.

Inventories. The pace of inventory reduction improved 1 point, with a net negative 2 percent of all owners reporting growth in inventories (seasonally adjusted). So, on balance, more firms are reducing inventory than building stocks. The net percent of owners viewing current inventory stocks as “too low” improved 1 point to a net negative 2 percent. Sales trends continued to deteriorate a bit but remained near the best levels in the recovery, just historically weak. Expected real sales did not improve, and this contributed to less urgency to rebuild stocks. The net percent of owners planning to add to inventory stocks rose 1 point to a net 1 percent. While inventories have been building solidly at the national level, it appears that the small business sector is adding little to the accumulation of stocks.

Inflation. Seasonally adjusted, the net percent of owners raising selling prices was a net 6 percent, down a surprising 8 percentage points. Twenty percent plan on raising average prices in the next few months (down 3 points). Only 3 percent plan reductions (unchanged), far fewer than actually reported reductions in past prices. Seasonally adjusted, a net 19 percent plan price hikes (down 3 points). These developments are good news to the Federal Reserve, making them more comfortable providing “accommodation” even though there isn’t much evidence to support the notion that buying bonds is helping the employment picture.

Infographic of the Day: Is An Electric Vehicle For Me?