Since the 1970s, many of us have feared the threat of inflation looming just around the corner. Within the past year, economists and central bankers have led us to believe the inflation dragon has been permanently relegated to a dark hole, never to rain fire on the kingdom of men. We’re told that deflation is the real threat and that governments can continually run large deficits without reawakening the dragon.

Recently, reality has intervened, however, to remind us that economists and central bankers aren’t infallible. U. S. Core CPI and global consumer prices have taken a sharp turn upward. 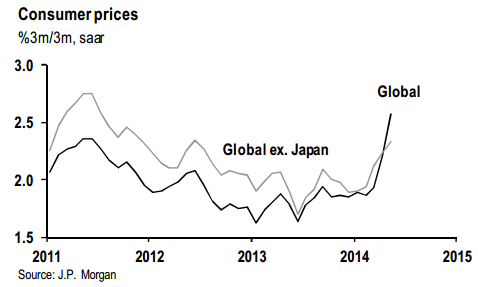 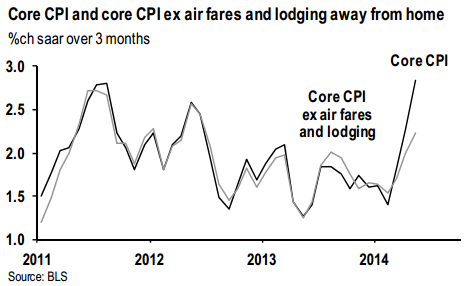 While this rate of price increase will have profound implications for business owners if it continues, that’s a story for another day.

Our story here affects these entrepreneurs more directly. Inflation comes as no surprise to those of us in the M&A business. We have watched for some time as the M&A market reheated and deal valuations reached levels not seen since 2007 – the peak of the financial bubble. We now have strong confirmation that this trend is not reserved solely for the megadeals on CNBC.

For larger deals that confirmation comes from Pitchbook which reported last week that, for the first half of 2014, average deal valuations reached an all time high of 11.5 times EBITDA. 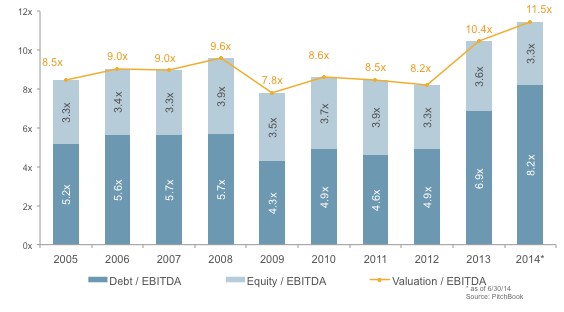 For smaller buyouts, the story is the same. Andy Greenberg, CEO of GF DATA®, is in a unique position to understand middle market M&A pricing trends. His company maintains a very comprehensive database of actual transaction values in the sub $250 million marketplace. In our recent interview, Andy shared his perspective confirming our belief that lower middle market M&A purchase multiples have reached historically high levels over the past 12 to 18 months. You can link to the highlights of Andy’s interview here and the full interview here.

The chart below tells the story. During 2013, private equity purchase multiples for companies with enterprise values under $250 million reached an average of 6.5X EBITDA. That’s up from 5.9X at the market trough in 2010. First quarter 2014 numbers indicate this trend continuing and even accelerating for the larger transactions. 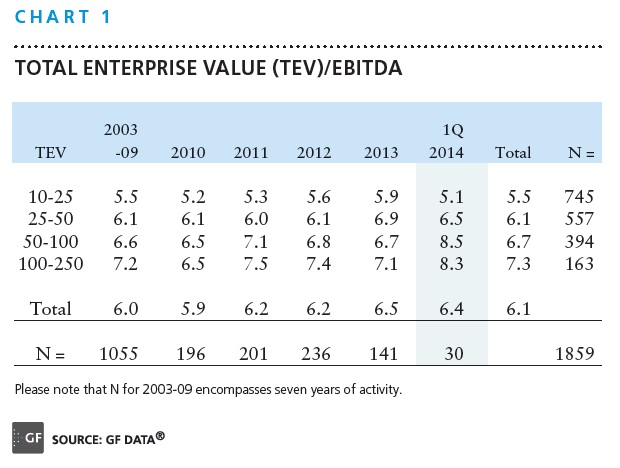 This size advantage appears to be unusually dramatic in the current market, with Q1 2014 EBITDA multiples for companies with enterprise values above $50 million averaging 8.9X EBITDA. 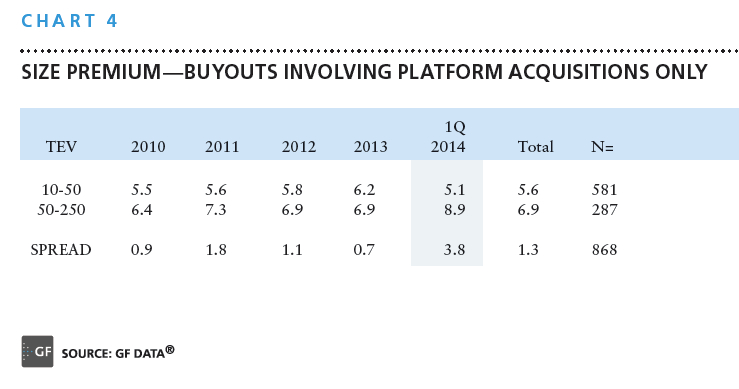 The data remains consistent when we look at purchase multiples from a profitability perspective. 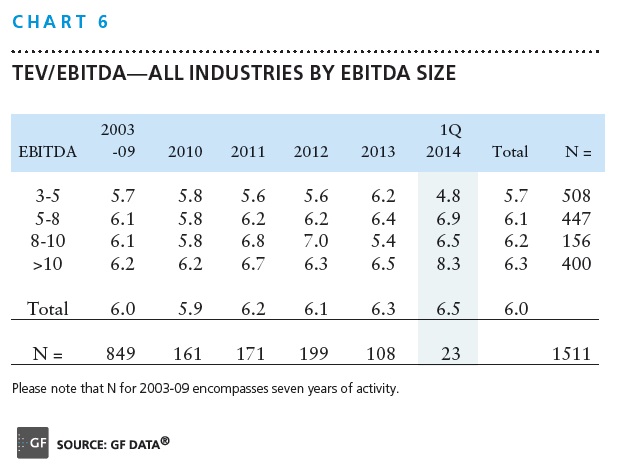 Bottom line – we are seeing historically high private company valuations five years into the economic upswing. From a successful middle-market company’s perspective, enterprise values today could be several times what they were five years ago. Take, for example, a firm that generated $50 million in revenues at the trough in 2009 with EBITDA profitability of 8% or $4 million. Today, the same company might be generating $80 million in revenues with profitability back to its historic range of 12.5%, or $10 million on an EBITDA basis. GF DATA® reports that this company would have likely sold for 6.5X EBITDA in 2009, but would now be worth on average 8.5X. For owners, the difference in enterprise value is a whopping $59 million!

For the first time since I’ve been in the M&A business, we have a window into the real market valuations of private companies thanks to information now being provided by GF DATA®. The charts above only scratch the surface of what’s available. To learn more about GF DATA® and a wealth of information on the M&A market and deal valuations, you can listen to Andy Greenberg’s full interview here. There’s a shorter highlight version here, but for readers with a real interest in the M&A market I recommend the full interview.