First time claims for unemployment compensation continued their string of record lows for the same week of the year but the improvement in the weekly number slowed radically last week in what could be the first sign of trend change.

The actual number, not subject to any seasonal hocus pocus was 384,481. That was 2,668 claims per million employed workers. That compares with bubble low of 3,350 per million for the same week of December, in 2007 just after stocks had topped out and the housing bubble was deflating. At the top of the internet/tech bubble in December 1999, the number was 2,877. The current bubble continues to break the records of the past 43 years.

We use actual data, as opposed to the seasonally manipulated headline numbers which Big Media shovels out for mass consumption. To see from the actual numbers if there’s any evidence of trend change we must look at how the current week compares with the comparable week in prior years.

Week to week changes are noisy. The trend is what matters. Since 2010 the annual change rate each week has mostly fluctuated between -5% and -15%. Last week was outside that range with a year to year drop of just -1.2%, another sign of possibly slowing momentum. But one week does not a trend make. The two weeks prior were within the usual range. Still, this bears watching.

A persistent shift to a year to year increase in claims would be a sign that the US economy is headed for recession. That shift has yet to happen.

The stock market is a key. Employers normally take their cues from stock prices. The Fed knows that businesspeople watch the stock market and often base hiring and firing decisions on its direction. The Fed seems intent on following through on the charade of trying to raise interest rates, but a weakening market would not only make the Fed even more cautious about continuing that course, it would at some point possibly even put QE back on the table.

The quantity of central bank printed money is more important to market trends than the cost of money. A variant of that idea that said that printing money would stimulate the economy spawned QE. In spite of all the evidence from Japan, Europe, and the US that QE stimulates only financial engineering, speculation and financial asset bubbles, and not real economic growth, central bankers continue to believe the economic mythology that it does. So the Fed has been cowering in reluctance to shrink its balance sheet and return to any semblance of a “normal” monetary policy.

In the meantime, the Fed has enabled and encouraged financial speculators and corporate executives to carry out a massive skimming operation which impoverishes an ever increasing portion of US households. Likewise, businesses have acted out a low-pay job hoarding bubble in response to the signals from the Fed QE-driven stock market bubble that has only recently stopped bubbling. 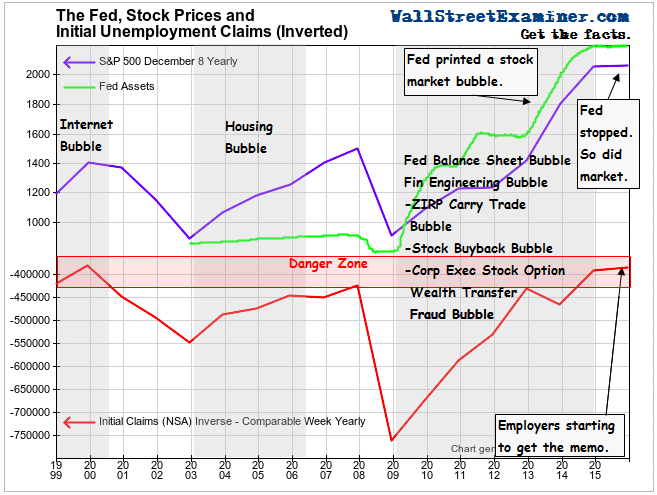 Employers saw the housing bubble beginning to deflate in 2006 and reacted accordingly, starting to lay people off that year. Stock traders were the last to get the news as the Fed kept growing its System Open Market Account (SOMA) at the then “normal” growth rate of 5% through mid 2007, when it stopped, before shrinking the SOMA late in 2007 and 2008. Employers, watching stock prices continuing to bubble near the highs cut back on layoffs again in 2007, but they chopped heads in droves as stock prices fell in 2008. .

The Fed stopped growing the SOMA last October. Since then stock prices have leveled out. Employers have started to catch on but continue to hoard their low paid workers. The massive layoffs won’t come until after stock prices have broken down.

The longer this goes on, the closer we come to the next “adjustment.”

I chart and analyze the real time Federal Withholding Tax data in the weekly Wall Street Examiner Pro Trader- Federal Revenues report. It has been an excellent predictor of final revised non farm payrolls and GDP.

In the Tale of Two Economies, massive gains accruing to the investor/speculator/corporate mafiosi class skew the headline economic numbers positive while the bulk of the American people experience no gains. QE and ZIRP have caused Ben Bernanke’s trickle to pool at the top with the banker/speculator/investor/corporate looter crowd. Meanwhile, the vast majority of American families have seen their household income stagnate for more than a decade as QE and ZIRP create perverse economic incentives that work to their detriment. The ever increasing economic drag which that creates will eventually result in negative top line numbers, but we aren’t there yet.

Record low claims are the patina of policy success that Wall Street and the dangerous, corrupt media empires that spread its propaganda use to anesthetize and hypnotize the public. The data hides the basic truth that most Americans are not doing well economically. These record claims represent a bubble that was born out of and is joined at the hip with the financial engineering bubble that has been metastasizing in the US economy for a generation.

We can thank central bank policy for the economic divide it has wrought and for the long term adjustment that lies ahead. The stock market faces the problem of reduced long term profitability that will ultimately result if most Americans can’t afford to buy the products and services that corporate America produces.

If you are new to these reports, here is a review of the key historical antecedents of the extreme readings on initial claims from a post, August 13, 2015.

“In recent weeks, Big Media and others have noted the fact that claims were recently lower than the record low of 1973. What they failed to mention was that that low came well after the Dow reached an all time high in January of that year. The devastating 1973-74 bear market, which cut the value of stocks by 50%, was in its early stages. This was an early example of employers being late to the funeral.

“Similar employer hoarding of workers has been associated with bubbles in the more recent past and has led to massive retrenchment, usually within 18 months or so. In the housing bubble, employer hoarding behavior continued well beyond the peak of that bubble in 2005-06.

“It’s worth noting that there was an institutional stock market bubble in 1972-73. It was the Nifty Fifty bubble, where the biggest best known stocks kept soaring while everything else in the market went nowhere. A bubble does not require mass public participation. Institutional bubbles are just as insidious, even more so.

“The current string of record lows in claims is now 6 months beyond the point at which other major bubbles have begun to deflate. Based on the fact that previous records were attained at and for some time after the peaks of massive bubbles, by that standard, the current financial engineering, central bank bubble finance bubble, which is very much a big money, institutional bubble, may be the bubble to end all bubbles!