There is a graph on the internet that shows how household net worth has changed over the past 59 years.  The graph, originally from Macro and Other Market Musings, has been annotated by Barry Ritholtz at The Big Picture. 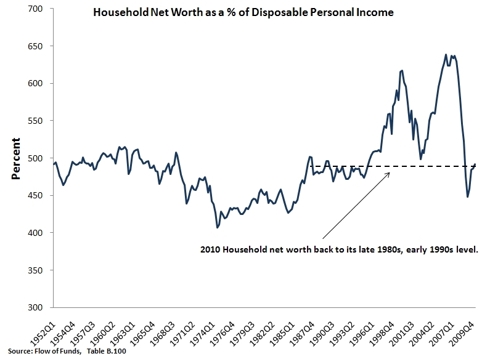 What is evident in this graph is another appearance of the effects of the two historic bubbles of the past half century. That the household net worth experienced bubbles is evident by another annotation of the graph that I have performed, below: 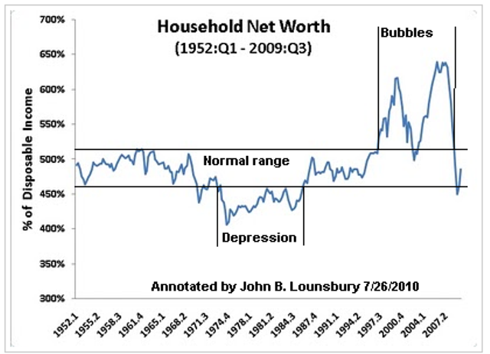 The relationship between household net worth and disposable income has returned to what I have labeled as the “normal range” for the 59 years. I think this is reasonable because 56% of the time the ratio has been between approximately 465% and 515%. I have labeled the years between 1973 and 1987 as a “depression” in the ratio (25% of the time) and the recent bubble years occupy the remaining 19% of the time.

It is worthwhile to also look at how real disposable personal income has changed over this time interval. The St. Louis Fed FRED database graph is shown below with the author’s notations to show the various time periods identified in the graph above. 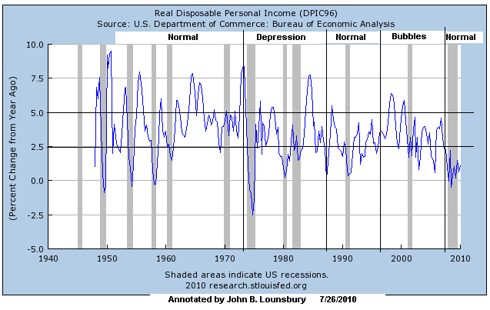 There are only a few things to note about the real disposable personal income numbers, and none will be surprising to readers with any awareness of economic issues. These are:

1. The early normal period (1952-1972) is estimated to have an average real annual growth rate average between the two horizontal reference lines.

2. The second normal period (1988-1996) also has an average between the two horizontal reference lines, but obviously lower than the earlier normal period.

3. The third normal period (2008 to date) has no readings between the two horizontal reference lines; clearly the recent drop in the ratio in the earlier graphs is due to a large drop in household net worth and not from any significant increase in disposable personal income.

4. The depression period (1973-1987) also had an average well within the area between the two horizontal reference lines, but lower than the preceding normal period and higher than the subsequent normal period.

5. The period of the two bubbles (1997-2007) clearly has two parts; before 2002 the average is clearly in the area between the two horizontal reference lines; from 2003 on, the average is very near or slightly below the lower line.

I have gone to the trouble of having this discussion to assure that the variation seen in the initial graphs is primarily due to household net worth and not to real personal disposable income. Only since 2003 has the denominator (income) had a significant impact on the change. That impact is to increase the height of the second bubble and increase the level of the latest normal period.

What we have is a demonstration that there has not been a decline in the level of household prosperity compared to most of the history reviewed, merely from a bubble of household prosperity. As is the case with all bubbles, they are not sustainable. When it comes to household net worth, we have simply gone back to what was a long standing relationship.

When it comes to household net worth, it appears that the new normal is not much different from the old normal, at least so far.