This article is joint work with Mana Shah.

What is economic freedom?

An index of economic freedom should measure the extent to which rightly acquired property is protected and individuals are able to engage in voluntary transactions. James Gwartney and Robert Lawson have proposed a definition where individuals have economic freedom when property they acquire without the use of force, fraud, or theft is protected from physical invasions by others and they are free to use, exchange, or give their property as long as their actions do not violate the identical rights of others.

Well functioning countries today are grounded in the yin and yang of political and economic freedom. Liberals like Milton Friedman and James Buchanan suggested that it is important to measure economic freedom across countries and across time. The Fraser Institute, based in Canada, put this idea into practice and has been working on measuring the levels of economic freedom across more than 140 countries since 1970. The annual reports of the Economic Freedom of the World (EFW) are a valuable source of data on this crucial issue.

Many researchers have explored this dataset on such questions. Broadly speaking, the findings suggest that more economic freedom is associated with greater wealth, lower poverty and higher growth. Greater economic freedom enhances civil and political liberty.

How does India fare?

The Indian score went all the way down to 4.4 in 1975. From there, slow improvements have been obtained. The score had recovered to 4.9 in 1990 and rose sharply to 5.6 in 1995. However, as many observers have emphasised, India’s economic reforms has not been a big bang story. From 1995 onwards also, the economic freedom score has improved further to 6.6 in 2006.

In relative terms, India was at the bottom (58th out of 72) in 1975 and has recovered to roughly halfway in the world in 2006 (77th out of 141 countries). While this is an improvement compared with conditions in 1975, there is no reason why India should not continue to push on these issues, to get to the ranks of the top 20 countries of the world.

In the current political debate on stalled reforms, most eyes and hopes lie with the states. Intense political competition and increasing political rewards for good governance are pushing states to explore and implement innovative economic, political and governance reforms. In this scenario, the Index provides an objective view on the positive and negative impacts of policy changes (or lack thereof) over a period of time.

The report, which is authored by Bibek Debroy, Laveesh Bhandari and Swaminathan S. Anklesaria Aiyar, ranks economic freedom in the 20 biggest states in India. This index is based on three parameters:

In summary, the findings are as follows:

The report has a separate chapter on Andhra Pradesh, the state that registered the fastest improvement in economic freedom moving up from seventh position in 2005 to third in 2009. Andhra Pradesh reduced waste and corruption and implemented innovative reforms. Three factors — buoyant agriculture, rural infrastructure and the elimination of Maoism — boosted employment and attracted in-migration from other states.

CMIE maintains a database named `Capex’, which tracks all outstanding investments in a state. We focus on the stock of investment that they define as being `under implementation’. For each state, the percentage share in overall Indian investment is computed, in December 2005 and December 2009.

This graph juxtaposes the change in economic freedom (from the table above) against the change in the share in investment (in units of percentage points): 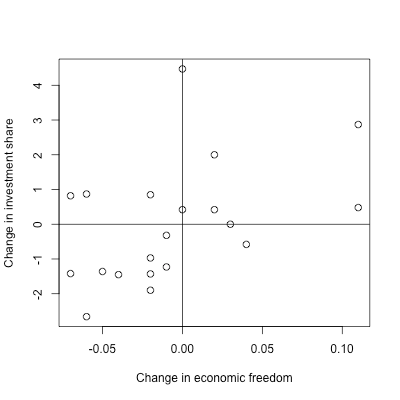 This does show a positive relation. There is a rank correlation of 0.42. It seems to say that states which improved economic freedom tended to improve their share in investment.

As an example, Andhra Pradesh got an increase in the share of investment of 2.87 percentage points from 2005 to 2009, and Andhra Pradesh was also a state where the economic freedom score went up by 0.11.

We have to, of course, be careful about ascribing causality. Perhaps high economic growth caused improvements in economic freedom (reverse causality). Perhaps some other unrelated factor caused both. But it is still quite interesting to find a relationship between two distinct data sources.

2 replies on “Economic Freedom in the States of India”